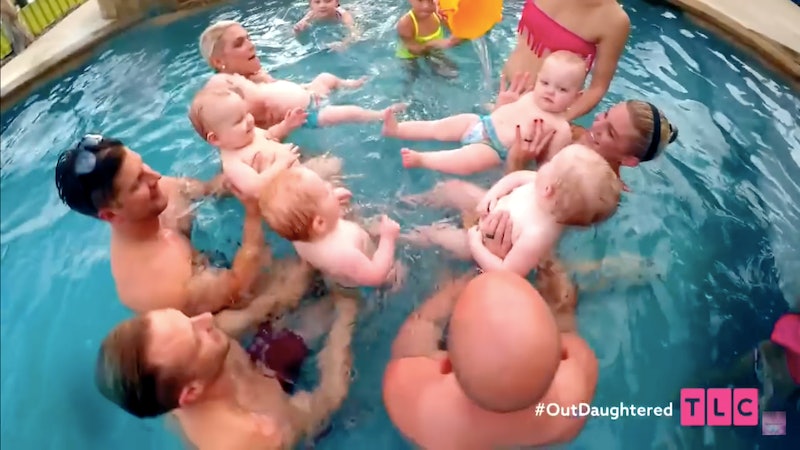 In two seasons on TLC, the Busby family have demonstrated just how overwhelming it would be to take care of quintuplet baby girls, no matter how much you loved DCOM classic Quints. In the second season of OutDaughtered, the Busbys have grown up a little, dealt with some serious health news, and become even closer as a family. But after the Season 2 finale, will OutDaughtered return for Season 3? TLC has yet to make a decision about whether or not the series will return, but if it does, it could be rather quickly. Only about six months passed between the first and second season premieres, so a potential third season could be arriving as early as Summer 2017. And since Season 2's OutDaughtered ratings have doubled some of its early Season 1 ratings, according to Showbuzz Daily, it seems likely that the network will be excited to bring the series back.

While waiting to find out whether or not OutDaughtered will be returning for a third season, what you can do in the meantime is catch up on what the Busby family has been doing since the Season 2 finale. If the series is brought back for additional episodes, there should be more than enough exciting news to make for a great third season.

Midway through Season 2, the Busbys had to make the tough choice to have daughter Hazel go through eye surgery. Since then, the family has rallied behind her in order to make sure she's able to see comfortably and walk, after getting a slow start. And now, after the hard work and attention given to her during the season, Hazel is catching up to the development of her sisters.

Inviting Over Even More Family

With six of your own, it probably makes more sense to host than climb in the care and travel for the holidays. Still, it's pretty impressive that the family managed to juggle even more people for a New Years' celebration.

Managing to Match Multiples Every Day

I can't imagine how intimidating laundry day at the Busby house must be, with so many identical tiny outfits, from tiny headbands to tiny socks. And even so, the quints always look perfectly put together.

Making Time For Blayke, Too

This little girl is incredibly well-adjusted considering she didn't just go from being an only child to having a sibling, but had to deal with the news that she now has five baby sisters. And her parents have been ensuring that she gets a little bit of the spotlight too, even though the family's fame does revolve around their unique multiple birth.

Going Out For Walks

There's a gadget for every occasion when you have almost a half-dozen kids younger than two, and the Busbys have them all.

It can't be easy to get personal time when you not only have six kids, but are also promoting your very own television show. But the Busbys have been able to manage to do both, by taking some time to go out on the town in NYC while visiting for OutDaughtered promotion.

Looks like this family will be generating more than enough material to warrant new episodes of OutDaughtered in 2017.

More like this
Lisa Kudrow Explained How Her Body Image Changed While Filming 'Friends'
By Grace Wehniainen
Does 'Locke & Key’s Ending Mean There Could Be A Season 4?
By Sophia Moore
'Yellowjackets' Just Announced Who’s Playing Adult Van & It’s Perfect
By Gretchen Smail
‘The White Lotus’ Is Coming Back For Season 2 This Fall
By Bustle Editors
Get Even More From Bustle — Sign Up For The Newsletter