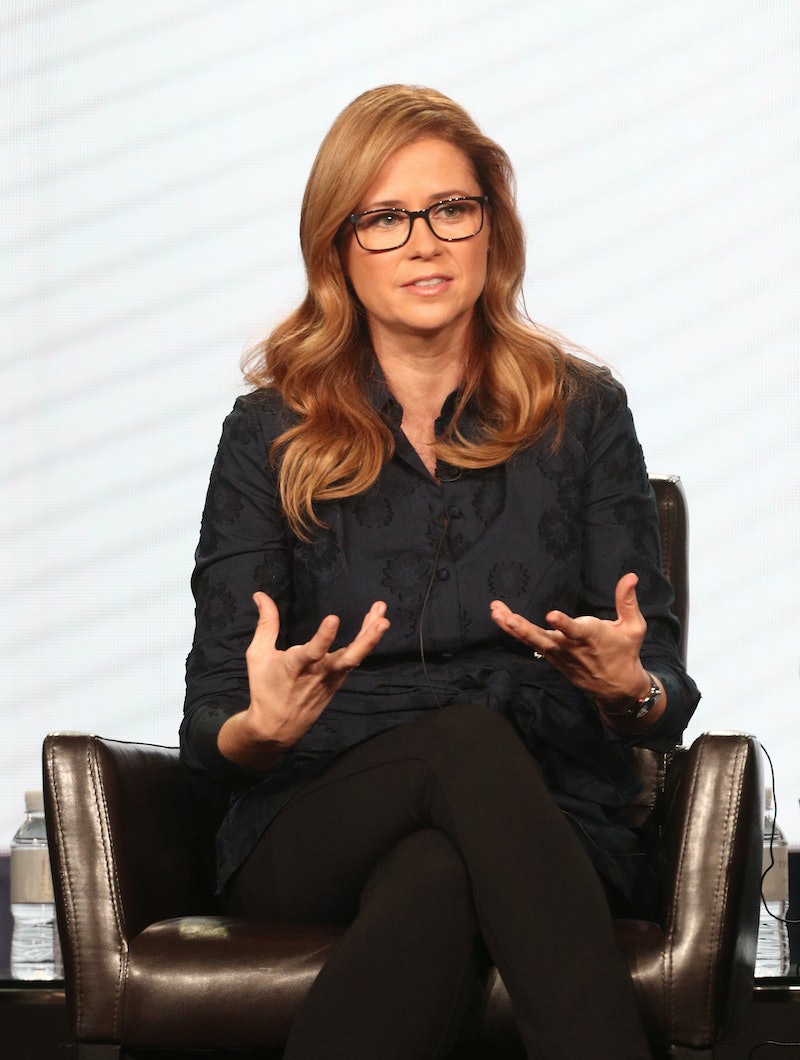 Rumors have been swirling that NBC is reportedly developing a revival series of The Office, a fan favorite sitcom that aired from 2005 until 2013 (NBC had no comment for Bustle regarding the news of the revival series). On Monday, Jan. 8, reporters at the Television Critics Association Winter tour asked if Jenna Fischer would return as Pam for The Office revival, according to The Hollywood Reporter. Fischer's new series Splitting Up Together (director: Helen Hunt) premieres on ABC on March 27 — but would she jump back to NBC to reprise her role as Pam? Her answer: "I think that’s for networks to figure out if I were to be asked," Fischer said, reported THR. "I haven't been approached about it and don't know anything about it. … But I love Pam!"

Fischer's beloved Pam Beasley Halpert went from working as Dunder Mifflin's receptionist who dreamed of becoming an artist to an art school alum, mom, and Dunder Mifflin's salesperson alongside her husband and soulmate, Jim Halpert (played by John Krasinski). Jim and Pam were one of the most loved couples on the series and most fans would cherish an update on what the Dunder Mifflin sweethearts are up to now. Fischer told The Hollywood Reporter that she is all in favor of The Office revival series:

"I think the idea of an Office revival is a great idea. I would be honored to come back in any way that I am able to. I loved playing that character and as long as Greg Daniels is the person in charge and the visionary behind it, then I would absolutely be up for it. We just have to get Mindy [Kaling], B.J. Novak, Gene Stupnitsky and Lee Eisenberg, Mike Schur to write some episodes. That show was so great because of the talent involved behind the scenes, not just on the screen."

So far, there are no returning cast members from the original series confirmed for the rumored Office revival series. Steve Carrell, who played boss Michael Scott, reportedly will not return and, according to TVLine, the search is on for a brand new "World's Best Boss" to lead Dunder Mifflin's new era. The original cast also included Krasinski, Rainn Wilson, Ed Helms, Mindy Kaling, and B.J. Novak — so far, none have confirmed their involvement. Krasinski is starring as the title character in the Amazon series Tom Clancy's Jack Ryan and Kaling recently gave birth to a baby girl, named Katherine.

Angela Kinsey and Creed Bratton did seem to express their interest in the revival series in a funny tweet on Dec. 18, 2017. She wrote: "Ummm @nbc call me.... have a quick question for you. Also call @creedbratton because he is blowing up my phone."

Since The Office revival has yet to be confirmed, fans will have to catch Fischer on her brand new ABC series Splitting Up Together for now. The comedy premieres on March 27 and follows a couple (played by Fischer and Oliver Hudson) who divorce after 12 years of marriage, but continue living together with their children. Hilarity is sure to ensue in this sitcom about a very modern family living situation.

Of course, there are also those who will always see Fischer as Pam on The Office, although the actor has also appeared in Brad's Status, The Mysteries of Laura, The Guest Book, and Drunk History after her tenure on The Office.

But fear not, if the rumors are true, then Pam's return could be coming up — and it sounds like The Office revival certainly has Fischer's blessing to happen...at some point.