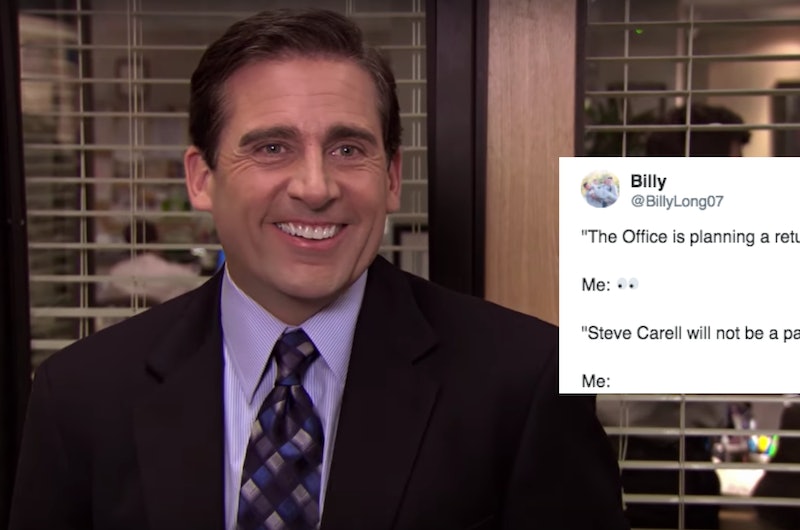 Bears, beets, Battlestar Galactica, and boot — as in, reboot. As in, The Office reboot. On Monday, TVLine reported that NBC is looking to revive the U.S. version of the beloved mockumentary series for the 2018-2019 season. Oh, and the site also reported Steve Carell won’t be in The Office revival. According to TVLine’s source, the search for a new boss has already commenced. (NBC had no comment for Bustle regarding the news of the revival series.)

Though the cast has yet to be confirmed, TVLine said that The Office reboot would include "a mix of new and old cast members." And hey, that's nothing to sneeze at: The unstoppable roster of the U.S. remake of the BBC series of the same name included John Krasinski, Rainn Wilson, Jenna Fischer, Ed Helms, Mindy Kaling, B.J. Novak, and, of course, Steve Carell as the manager of Dunder Mifflin's Scranton location. But sadly, it sounds like fans can cross Carell's name off of the reboot list.

Back in August, NBC Entertainment chairman Bob Greenblatt addressed whether or not an Office reboot was in the cards. He told Deadline at TCA,

“We often talk about The Office, I’ve talked to Greg [Daniels] four times over the past few years. It’s always, ‘maybe some day but not now.’ There is certainly an open invitation but we don’t have anything happening right now. If he wants to do it, I would do it.”

Carell, on the other hand, has made it pretty clear that he has no interest in returning to the show. He told Junkee back in May,

“You know, it goes back to talking about that lightning in a bottle, because, and nothing against any revivals that happen, but these are never the same. You never get the same kind of energy. It would have to be exactly the same as it was to work. And it never could be. So my inclination, and I think the inclination of most people who had worked on it, would be to just leave it the way it is, and not desecrate whatever it was. Because I think it was special, and everybody who was involved with it thought it was special.”

When asked if he misses playing the role of Michael Scott, Carell replied, "No, I don’t miss doing the character." But fans will be relieved to know, his quote continued, "I’m glad I did the character.”

Carell has moved on, but it still sounds like the show will go on. And Office fans have some feelings about TVLine's report. In summary, they seem as thrilled about a Michael Scott-less Office as Michael Scott would be if he had to spend an entire day with Toby Flenderson.

The Michael Scott GIFs Are Pouring In

And hey, if there was ever a time to let the Michael Scott memes flow, it's now.

The Memes Are Loud

There's no such thing as too many Os when saying the word "no."

The Memes Are Quiet

And The GIFs Make One Thing Clear

And that thing: They are not on board.

This Fan Doesn't Hate The News

But uh, it isn't exactly a ringing endorsement.

Seth Rollins Had A Few Things To Say, Too

Er, a supercut of WWE superstar Seth Rollins, that is.

Ah, yes. Season 8 and Season 9 were good and all, but no one can say the show felt as right without Michael Scott.

And Here's A Pointed Salutation

Whatever happens with this The Office reboot, remember this quote that was once uttered by a wise man: "It's never too early for ice cream."