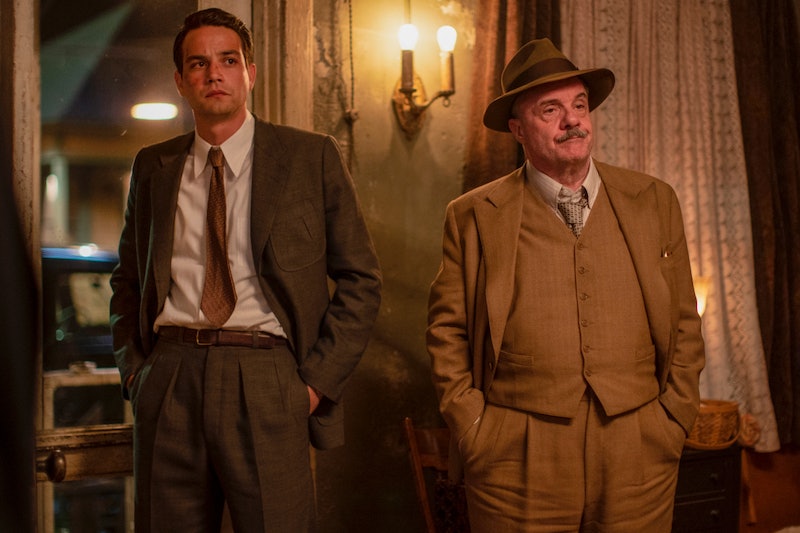 While the original Penny Dreadful reinvented classic Gothic literature characters like Frankenstein and Dorian Gray, City of Angels focuses on an all new cast of characters in 1930s LA. Inspired by Trump's ICE raids and immigration policies, the show follows Detective Tiago Vega, the LAPD's first Chicano detective, and the various conflicts that arise around him. The season opens with the murder of a white family, seemingly by Latino radicals, while the government and LAPD push to displace Tiago's community to build the Arroyo Seco freeway.

Watching this drama unfold are goddesses Magda and Santa Muerte, who are trapped in a philosophical tug of war about whether humans are fundamentally good or evil. Bearing Santa Muerte's mark, Tiago is prophesied to be an important player in their game of chess, but Magda complicates things by shapeshifting and stirring up ill will among the government officials, gangsters, and American Nazis.

The story branches out from there, and City of Angels attempts to juggle a bit too much in its opening season. Tiago's investigations lead him to the cult-like Joyful Voices Ministry, where he falls in love with Molly, their radio prophet. Meanwhile, Tiago's partner Michener investigates the deaths of his Jewish friends at the hands of Nazis. Tiago's brother joins a gang, and his sister gets brainwashed by Joyful Voices Ministry. Taking on different forms, Magda begins an affair with a Nazi, and also manipulates councilman Townsend, whose own political and romantic struggles unfold during the season.

It's a lot to take in, and as Danette Chavez wrote for AV Club, each of these characters and storylines aren't developed in equal measure; Tiago is clearly the main character, but it's difficult to tell who else is meant to be a lead versus just a supporting character. "The A story is hard to distinguish from the B story," Chavez wrote. "Motivations arise and disappear, while big steps are taken with little justification."

A second season could help fill in all these various storylines, while also allowing time to explore more mythology and occultism. Whereas Penny Dreadful brought in every manner of werewolf and vampire, Santa Muerte and Magda are really the only supernatural characters in City of Angels. Mexican culture is just as rich in lore as European culture is, and it feels like a missed opportunity that City of Angels has focused primarily on a newly made up — and white — demon. While it's good that creator John Logan is using his spinoff to address pressing social issues, perhaps a second season will allow him to explore the richness of Mexican and South American culture and folklore — if Showtime decides a second season is warranted, that is.

More like this
Everything We Know About When To Expect The Rest Of The Upshaws Season 2
By Kadin Burnett
Why Sadie Sink Is Hopeful Max Will Return In Stranger Things Season 5
By Brad Witter
Hayden Panettiere Admits "Addiction" To Alcohol & Opioids Before Going Sober
By Jake Viswanath
Everything To Know About The 'Pretty Little Liars' Reboot On HBO Max
By Mary Kate McGrath, Jack Irvin and Radhika Menon
Get Even More From Bustle — Sign Up For The Newsletter