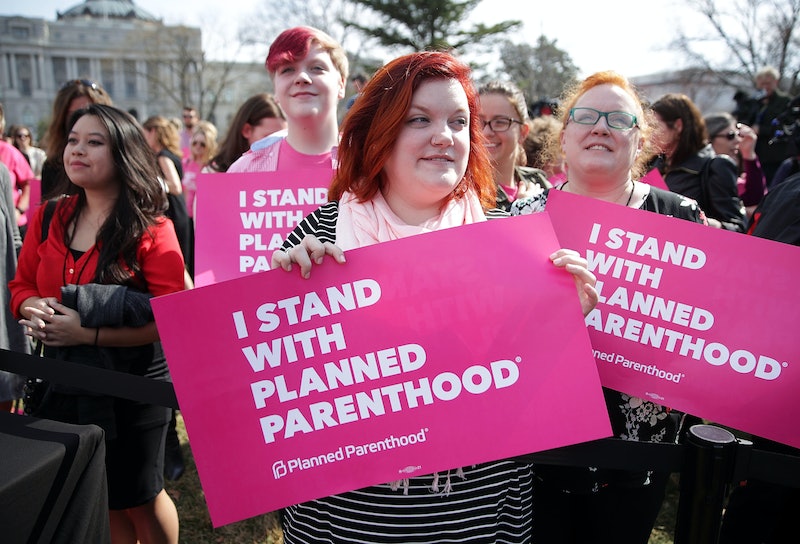 After Donald Trump signed a bill on Thursday allowing states to strip Title X funds from abortion-providing organizations, many women are wondering if Planned Parenthood will lose money. Although the bill, which Democrats say targets the organization in particular, does not "defund" Planned Parenthood and other organizations like it, it does roll back a regulation put in place by Obama near the end of his second term. Under the Obama-era rule, states were prohibited from withholding Title X funding from family planning centers providing abortion unless they're unable to serve their patients. The bill Trump just signed into law, however, rolls back these regulations, allowing states to block federal funding from abortion-providing clinics like Planned Parenthood.

To predict the effect this will have on Planned Parenthood, it's important to understand Title X first. Enacted in 1970, Title X is the only federal grant program dedicated to family planning and related health services. By law, it's designed to prioritize low-income patients, giving them access to health care they may not otherwise receive. According to Planned Parenthood, more than four million people rely on services funded by Title X, including routine gynecological exams, STI testing, and birth control. In 2011, NPR reported that about a quarter of all Title X funding goes to Planned Parenthood and its affiliates. Under the Hyde Amendment, this money can't be used for abortions.

So what does the Senate’s measure mean for Planned Parenthood’s funding? According to CBS News, Republican supporters claim that the bill gives states more freedom to choose where Title X funding goes — the implication being that states will divert money from clinics providing abortions.

Although it doesn't use federal money for the procedure, Planned Parenthood is one of the best-known abortion providers in the United States, and Republicans (including Vice President Mike Pence) have been fighting to block funding to the organization for years. Furthermore, according to Politico, 13 red states restricted Title X grants to Planned Parenthood before Obama signed last year's regulation. Now that the new bill has rolled back Obama's prohibition, it's not unlikely that these states will return to blocking Planned Parenthood funding.

However, that doesn't mean Planned Parenthood will lose its funding entirely. In a statement published on its website, the organization explains, "To be clear, this bill does not 'defund' Planned Parenthood. However, this move could embolden states to block access to family planning health care providers across the board, both Planned Parenthood health centers and independent clinics."

Ironically, Title X provides millions of patients with preventative care, thereby lowering the abortion rate that concerns so many conservatives. According to the Guttmacher Institute, clinics funded by Title X prevented an estimated 904,000 unintended pregnancies, 430,000 births, and 326,000 abortions in 2014. The report estimated that without Title X-funded services, "the U.S. rates of unintended pregnancy, unplanned birth and abortion each would have been 33 percent higher, and the teen pregnancy rate would have been 30 percent higher."

While Planned Parenthood isn't "defunded," blocking federal funds to the organization is now a very real possibility, so it's likely to lose some money — but it's the patients that will be most affected. Planned Parenthood states that 75 percent of patients have incomes at or below 150 percent of the federal poverty level. Given that these are the patients Title X is designed to help, it's clear that already-vulnerable groups stand to lose the most in the wake of the Senate's measure.