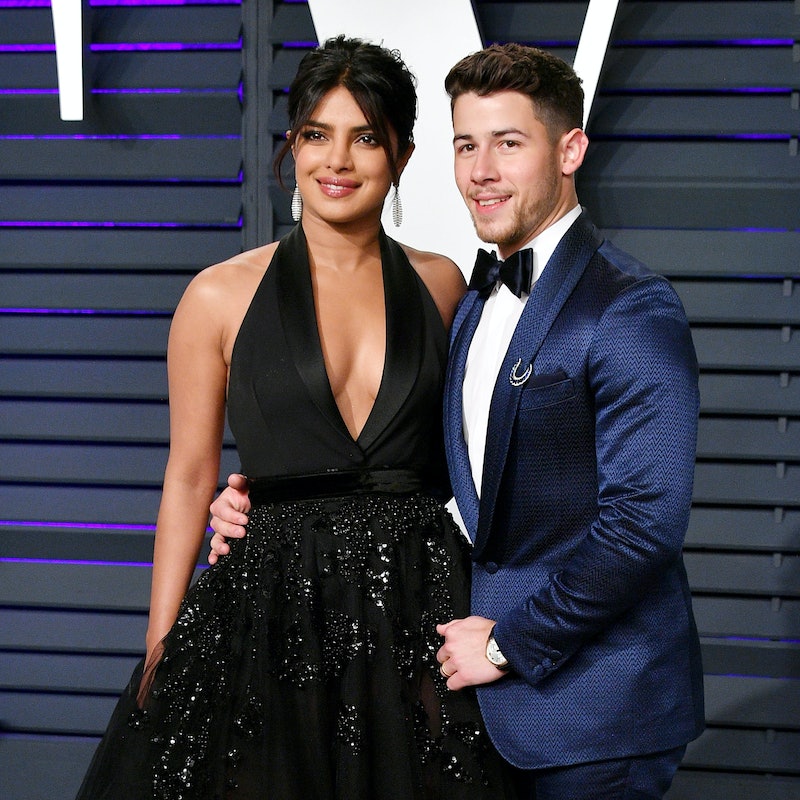 It's been five months since Nick Jonas and Priyanka Chopra tied the knot, and in that time, a lot has happened, including the Jonas Brothers getting back together — and so far, Chopra has been there, supporting her husband at his concerts and even appearing in the music video for "Sucker." But what about his upcoming awards show performance? Will Chopra be at the 2019 Billboard Music Awards when Jonas takes the stage with his brothers, Joe and Kevin? It's hard to say exactly where she'll be that night just yet, especially since she hasn't confirmed it herself.

As supportive as Chopra has already proven herself to be, it seems this week she's already pretty busy with things that have taken her to the other side of the world. Right now, she's in India visiting family, as well as exercising her political rights. As Vogue India reported, on Monday morning, Chopra voted with her mother in Mumbai in the 2019 Lok Sabha Elections, and she even took to Instagram to remind her local followers to do the same.

"This is the moment that matters.... Every vote is a voice that counts," Chopra wrote, sharing a selfie on voting day.

According to Chopra's Instagram, she's been spending a lot of time in India with her friends and family over the past few days. She shared a photo of some quality time she was spending with her family:

And she even got to make a little homemade ice cream with friends while having a girls' night.

Unless Chopra is planning a last minute flight home for the awards, it wouldn't be surprising if she'll be in India when Wednesday night's BBMAs roll around. But Jonas will be probably be just fine without her there — after all, he does have his brothers.

And it was only recently that Chopra attended her first Jonas Brothers concert, too. On March 30, the recently reunited band played a pop-up concert in Atlanta, Georgia, and Chopra was there for the whole thing, sharing updates from backstage on her Instagram Story, and she seemed pretty pumped about the whole event. Later, she even shared a group photo with all three of the guys from The Tabernacle, where the concert was held.

It'll definitely be a bummer if Chopra can't make it to the awards, but since the Jonas Brothers so recently got back together, it's probably safe to say that there will be plenty more opportunities for her to support her husband (and his brothers) at upcoming performances, especially if a tour is in their near future.

If Chopra does make it to the Billboard Awards, fans will undoubtedly catch her and Jonas on the red carpet, but if not, she'll likely catch Jonas' performance the same way most fans will — on TV. The 2019 Billboard Music Awards air Wednesday, May 1 on NBC, and if you happen to be a fan of Chopra's husband, you definitely won't want to miss it.