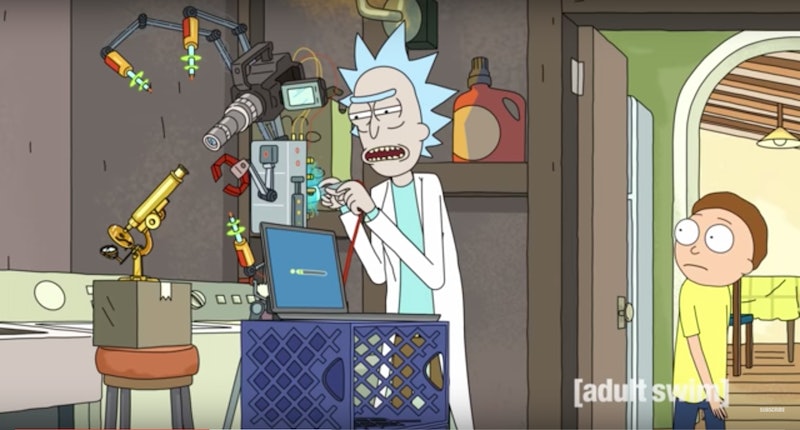 Rick and Morty fans have been patient for a long time. The only clue Adult Swim gave about the show's third season is that it would air "this summer". It's been nearly two years since the last season of the show, and despite the premiere episode debuting on April Fool's Day, rumors started to swirl about the series' cancellation. On Saturday, co-creator Dan Harmon assured fans that the show is not canceled and explained to fans via Twitter why Rick and Morty Season 3 is delayed. Turns out the reason behind the postponement is pretty simple: Harmon was feeling the pressure from the show's success, and had some good old fashioned writer's block.

The show, which follows aging science genius Rick as he drags his hesitant grandson Morty on adventures through the multiverse, has a devout following. These watchers can be an eager bunch, and fans hounded Harmon for months to try and bully information on the new season out of him. This all came to a head on April 1, when a brazen fan asked the comedy writer on Twitter to release a new episode right away. Much to everyone's surprise, Harmon agreed, and the first episode premiered months ahead of the show's expected release date. This wasn't quite enough to satisfy the devout fans, who, when the show faced further delays, were back to churning out cancellation theories.

It's well into the summer and the show still hasn't set a premiere date, so fans are getting antsy. Will the third season of Rick and Morty be released this summer, if at all? Harmon promised it would be out soon, and explained the delays in an extended Twitter thread. The actual reason behind the long wait for the new season is pretty simple: They wanted to make it great.

Fans were especially concerned about potential conflict between Harmon and his co-creator, Justin Roiland. In January, Harmon gave an interview with IndieWire where he mentioned spats in the writer's room. "We have fights all the time and then we have fights about why we’re having fights,” he told the publication. “‘Well, we didn’t fight during Season 2, that’s why it’s taking longer! All this fighting! So OK, let’s stop fighting!'”

The co-creator once again assured fans that all is well between him and Justin Roiland in Rick and Morty writers' room.

Harmon's extended feud with Chevy Chase during his final days working on Community was well documented, so fans of Rick and Morty feared the show would face a similar fate if Harmon and Roiland weren't able to find Harmon-y (sorry) in the writer's room. However, the creator took to Twitter and assured that relations between the two minds were fine and that wasn't the reason behind the new season's delay. This was little comfort for many viewers, as the series had pushed back the air date for over a year.

Before signing off, Harmon took one last chance to assure his followers that the new season would be worth a wait, and crack one last joke about his fabled beef with Roiland, playfully challenging him to a fistfight via tweet.

It was a long Twitter rant, but hopefully it gave some comfort to the Rick and Morty fans. Harmon is right - his show does have a fervent following, and it's no surprise that after a year of delay an already impatient fanbase started to lose hope. Have no fear - grandpa Rick can't stay a pickle forever, and he should be blasting through time and space with his reluctant sidekick Morty soon.