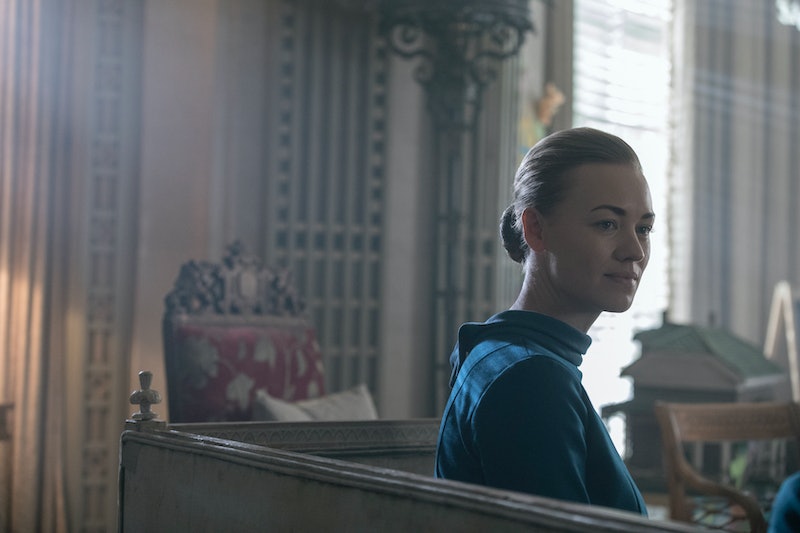 There are fan theories that June and Serena will co-parent Nichole and Hannah at the end of the series, free and reformed in Canada, but that seems less and less likely every week. There's also a theory that Nick is Fred's son, after all. But these theories ignore most of the writing and themes that make the series so tense — Serena and June getting brunch together is not how this all ends up, sorry.

According to the deal that Serena struck with the American and Canadian governments, she is allowed chaperoned visits with baby Nichole, who is currently in Moira and Luke's custody. But that doesn't mean Serena can do whatever she wants around the infant. In fact, during their first visit, the social worker scolds Serena when she calls herself the baby's mother. The social worker is worried that it will "confuse" Nichole as she grows up, which is a fairly clear sign that the baby won't be handed over to Serena any time soon.

This poor child has such a complicated guardian history. Her biological birth parents are June and Nick. Now, as a refugee, she has been legally adopted by Luke, and Moira is her godmother, as we saw a few episodes back when she was baptized. Under Gilead law, Fred and Serena are her legal parents, but given that they are considered war criminals by the rest of the world, custody might be an issue.

Yet, that's the improbable premise the show is setting up in the second half of Season 3. Serena is apparently working with the Americans by turning Fred in, and she seems to think she deserves custody of a child that really does not belong to her. The time that Nichole spent with the Waterfords without June in the house is more akin to fostering than anything else. So why does she seem so convinced that Nichole is her family?

The Handmaid's Tale is a fictional, dystopian world. We don't know all of Gilead's laws, or what powers the United States' government in exile has in this fictional world. Therefore, creative license will certainly contribute to what happens to Nichole next. However, Serena is an accessory to rape, kidnapping, slavery, and war crimes. Moira was right, she is the true "gender traitor" as far as human rights are concerned.

Even if she cooperates further, what government would deem her a fit mother for a child who has already been through so much trauma? Remember: Every Handmaid's child conceived in Gilead is the product of rape. Nick and June were supposedly consenting when they had sex, in this specific case, but would they have done so if they weren't there to begin with?

June and the other Handmaids can't really consent to anything, given that they are slaves. As for Serena, Gilead doesn't allow women to read or write, so it would be difficult to prove in court that she was ever Nichole's legal guardian. She hasn't signed any paperwork.

The only other person who has called Serena Nichole's mother is June, but again, their power dynamic is built on slavery. When June assures Serena that she was a mother to Nichole, she was trying to survive. She was also reminding Serena that she agreed the best thing for Nichole was for her to grow up outside of Gilead. It wasn't until after this conversation that Serena started putting a plan in motion to get Nichole back. As her mother, June wants Nichole in Canada — full stop.

While it's near impossible to root for Serena, there is a chance that she could realize there is more to her life than this one baby. She genuinely lit up when Mark Tuello handed her a newspaper and asked for an opinion.

Turning in Fred was a good start towards undoing everything she has done to society, but Nichole is not Serena's daughter, and the way The Handmaid's Tale is going, she never will be.