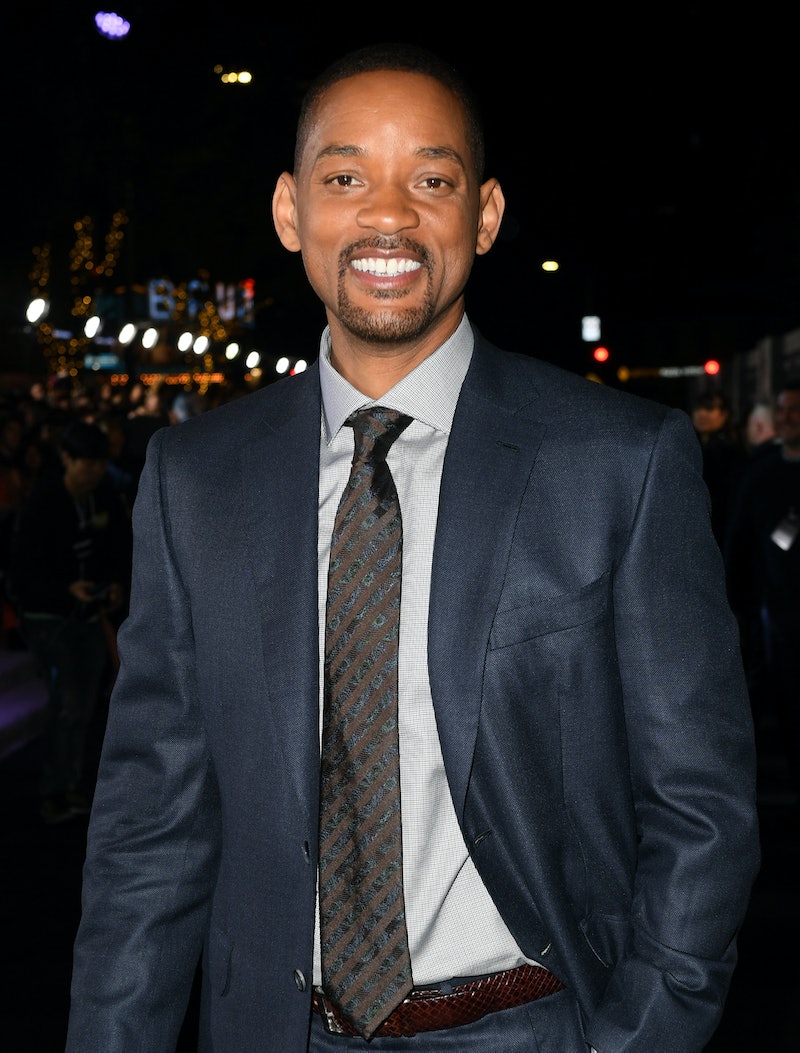 On Wednesday, Dec. 19, Entertainment Weekly debuted its latest cover, giving viewers their very first look at the live-action remake of Aladdin, starring Will Smith as the Genie. And while people definitely had some very passionate thoughts on the images (like why the heck is Aladdin wearing a shirt underneath his vest?!?!), the biggest concern that came up was the fact that the Genie was no longer blue. Thankfully, this shocking reveal was almost immediately explained by Smith, who confirmed that his Aladdin Genie will be blue after all and that the photos shown are just his character in a human disguise form. So consider your wish fulfilled. (Maybe he really is a genie after all?)

Once the EW cover art was released, the actor took to Instagram to share the exciting news with his fans and even included in the caption that he was going to be sporting the iconic blue for the remake. "BAM!! First look at the Genie, Princess Jasmine, and #Aladdin!" he wrote alongside the photo. "Check Me Rockin’ the Top Knot Ponytail Vibes in @entertainmentweekly (and yes, I’m gonna be BLUE! :-) )" Not everyone seemed to get the message, though, prompting several fans to take to social media to voice their concerns over why the character didn't appear blue in any of the photos.

It didn't take Smith long to see the backlash that had started to form, prompting him to further ease any doubts or concerns that they had on the matter. When one fan commented under his Instagram post, asking "You're not blue?" Smith responded with a pretty reasonable explanation for it all. “I’m gonna be BLUE!" he assured the fan. "This is how the Genie is in Human / Disguise Form. My character will be CGI most of the movie.”

Interestingly enough, though, this isn't even the first time Smith has confirmed that he would be donning the character's signature blue appearance in the live-action movie. Back in October, he took to Instagram to debut the official Aladdin remake poster, which featured the magical lamp accompanied by the tagline "Choose wisely." Smith captioned the post, writing, "LEMME OUT!! Can’t wait for y’all to see Me BLUE! :-)" So at least fans can take comfort in putting this one fear to rest once and for all.

A teaser trailer for Aladdin also dropped the following day, which once again showed Aladdin, played by Mena Massoud, wearing a shirt underneath his vest (seriously, what's up with this?). The video focuses mainly on Aladdin's trip into the Cave of Wonders to retrieve the magical lamp, but unfortunately Smith's Genie does not make an appearance. So no, we still have yet to see the Genie's full look just yet, but it's only a matter of time.

This trip to Agrabah may be filled with some noticeable changes along the way (like the introduction of new songs, for example), but now you can be rest assured that the Genie's iconic blue hue won't be one of them.