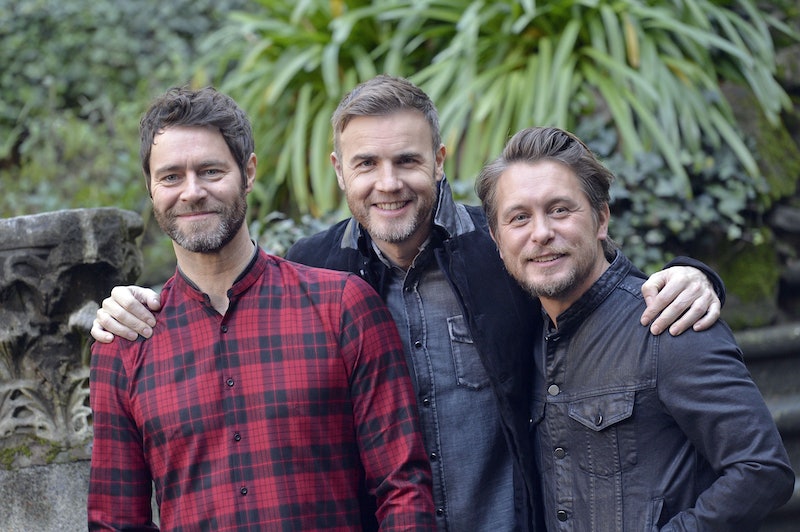 Take That fans have been enjoying a weekly helping of Robbie Williams on the current series of the X Factor, and his presence on the show has brought the prospect of potential new music from his legendary boy band back into question. But will Take That release a new album in 2019? Well, fans of the '90s heartthrobs are in luck, because although no brand new material is on the cards as of yet, the band will be releasing a new Greatest Hits album titled Odyssey in November this year.

The upcoming album, which is being released to celebrate the band's 30th anniversary, has been descried by band member Gary Barlow as "Greatest Hits with a twist" and will perfectly compliment the now three-piece's The Greatest Hits live tour, which is due to take place in the summer of 2019.

The UK tour runs from April to June at venues in Manchester, Dublin, London, Birmingham, Huddersfield, Sheffield, and more. As well as an exciting new tour, it looks like fans can expect some interesting new takes on the band's three decade-long discography. According to The Express, when delving into details about the Odyssey album, former X Factor judge Barlow said: "We've reimagined some of the songs, but not all of them. You've got to be careful with these things. If you take them too far, you're destroying people's memories."

He continued "We've tried to be respectful to the music, but just putting a load of music on an album wasn't enough for us. We wanted to just go back and have a look through it, and try to make it sound better."

Given that Take That are releasing a new album at the end of this year and will be on tour next year, it'll certainly be a push to expect the lads to launch an album in 2019 as well. However, I reached out to their rep to find out for sure. The band's spokesperson is yet to get back to me, but as soon as they do, you'll be the first to know.

The Take That 30th anniversary festivities now also include a Smooth Radio special, which is set to be hosted by Barlow himself. The scheduled radio show titled Take That At 30 will see Barlow play the band's biggest hits, as well as discuss the upcoming UK tour and greatest hits album alongside co-host Margherita Taylor. The programme, which is due to air on Smooth Radio on Sept. 30 at 9 p.m., will also touch upon the history of the iconic band, as well as other important moments in Take That's history including their massively successful 2005 comeback, and the emotional London 2012 Olympics closing ceremony performance.

With an overload of exciting news surrounding the band's 30th anniversary celebrations, fans around the world can't seem to contain their excitement.

Currently, former bandmates Williams and Jason Orange are not officially attached to any of the confirmed 30th anniversary plans, and with Williams busy with his stint on the 15th series of The X Factor, it seems unlikely things are about to change.

However this doesn't appear to have put a damper on the upcoming tour and album release. When speaking with Hits Radio presenter Sarah-Jane Crawford at Hits Radio Live in Manchester, as reported by The Sun, bandmate Mark Owen said: "It’s 30 years this year. We’re making a record, we’re always celebrating, we’ve been celebrating for thirty years."

If the excitement coming from Take That themselves is anything to go by, longtime fans of the lads are in for a treat. Bring on 2019.