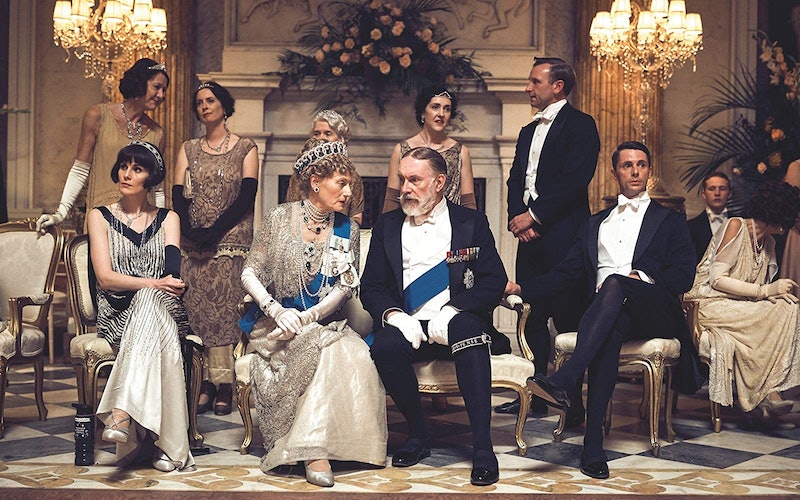 It's been over three years since the last episode of Downton Abbey aired, and on Sept. 20, the first Downton Abbey feature film is premiering in theaters. The Crawley family are hosting a major event — a royal visit to Downton from King George V (Simon Jones) and his wife Queen Mary (Geraldine James). Fortunately for fans who don't ever want to say goodbye to the household for good, there's already a possibility that the Downton Abbey movie will get a sequel.

In an interview with Entertainment Weekly in December 2018, creator Julian Fellowes said that he decided to make the movie because, “it seemed a nice idea we should come back for a final curtain call.” But in more recent interviews, Fellows contradicts his earlier comment. Addressing the "current call" phrase to EW in May, Fellowes clarified, "I’d never say that. Because one never knows. And anyway show business has a way of tearing up your plans. At the moment as far as I’m concerned, this is the resolution of what has been a tremendously enjoyable, rather extraordinary ride on a magic carpet."

And in an appearance on Good Morning Britain earlier this month, the creator again resisted declaring this film the end of Downton. "I never say never anymore," he said. "I’m too old for that. Because the moment you say never you immediately swallow it a month later. And the fact is I don’t know. I think it rather depends as to how the picture is received and we will all have a think about whether we want to go there again.”

But in the event of another film, Lady Mary Crawley (Michelle Dockery) may no longer be at Downton Abbey. In the trailer for this movie, Mary expresses interest in leaving her family's Edwardian country house for a change of scenery. But even if Mary moves on, it's unlikely Dockery would be missing from future movies. The actor told The Los Angeles Times, "I will never be done with it. It has been part of my life and it will always be part of my life, forever. It changed my life. And we’ll see after this film. We’ll see how it’s received ... we’ll deal with that as the time comes." Like Fellowes, she's looking for the public's reaction and possible demand for more movies.

And it seems that at least some of the other actors feel the same. Dockery's co-star Hugh Bonneville, who plays patriarch Robert Crawley, Earl of Grantham, told the LA Times, "[This movie has] given me an appetite for [more]."

For now, it seems fans will have to wait at least until after opening weekend to find out whether another Downton Abbey film is going to be made. According to Deadline's box office predictions, the movie, which is "on fire in pre-sales," is estimated to open between $15 million to $16 million on its first day. The site describes these numbers as "solid for a period film."

Whatever the box office take, it seems that the film does tease a continuation of the story. "Don’t be surprised if there are more films to come, especially since this satisfyingly dense deep dive into Downton-land is clearly getting the infrastructure ready to keep the story going," Leslie Felperin writes for The Hollywood Reporter. "Sure, a few of the series’ regulars probably won’t come back, but without spoiling anything we can reveal that the last scenes are all about the old passing on the house keys of power to a younger generation."

Downton Abbey: The New Class? Seems like a probable next step.