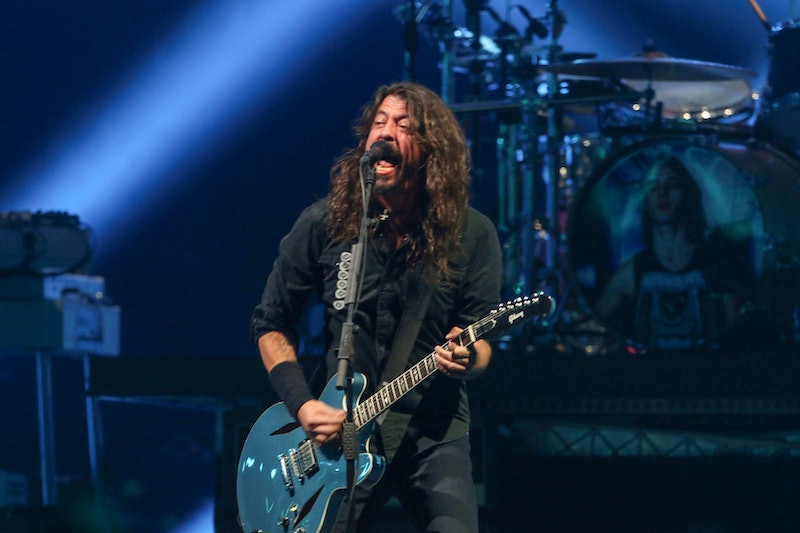 Back in 2017 the mighty Foo Fighters hit the road in support of their number one album, Concrete and Gold. The legendary band have since played sold-out shows across the UK over the past two years, at venues including the Glastonbury Festival, London's O2 Arena, the Royal Albert Hall, and multiple football stadiums. But will the Foo Fighters tour the UK in 2019?

Although the "Learn to Fly" hitmakers haven't announced an official tour, the band will grace the UK with a variety of gigs throughout the summer of 2019. According to NME, the Foo Fighters will kick off their scheduled UK shows on Saturday August 17 at the Glasgow Summer Sessions — where they will perform at Bellahouston Park. The group will then move on to Belfast and perform at the Boucher Playing Fields on Wednesday August 21, before headlining one of the biggest music festivals in the UK, the Reading and Leeds Festivals. The headline slots will first take place in Leeds' Bramham Park on Friday August 23, and conclude in Reading's Richfield Avenue on Sunday August 25.

If you're hoping to see the American band live, you might want to act fast, because Fighters frontman Dave Grohl has previously hinted that the band are set to "take a break" at some point.

During the final leg of the band's Concrete and Gold Tour last year, the rocker made an appearance on the Billboard's Chart Beat podcast and said "So here we are at the last seven shows of our tour and I’m ready to take a break." However, worried fans breathed a sigh of relief when he added "but I’m ready to do it again at some point."

And fans might just have another album to look forward to, as the 50-year-old also teased that he could already "see" the new album — but there are no promises as to when the band will actually record it. According to Radio X, Grohl explained: "see I don’t read music, I can see the songs in shapes and patterns. So I can see the next record. I know that there’s another one there. I don't know when, but I think I know what we should do." The Grammy Award-winner then touched upon the impressive longevity of Foo Fighters, and discussed the band's 24-year history. He said: "It’s a trip. It’s a time warp. Because really when I start thinking about all the things that have gone by and the first album and the second and the third album and the fourth album and thinking 'Wow, people were really listening? Holy shit. Cool!'"

As previously reported, the band's latest album Concrete & Gold was released back in 2017, and a lengthy world tour soon followed. According to NME, British singing sensation Adele was rumoured to be featured on the album, but sadly Grohl dismissed the claims. He said: "Unfortunately it wasn’t true, but maybe next time." However, the Fighters frontman is clearly a fan of the "Hello" singer, and previously brought his daughter Violet onstage to perform a cover of her smash hit, "When We Were Young."

Tickets for the Foo Fighters upcoming UK shows are available on Ticketmaster and the official Reading and Leeds Festivals website.