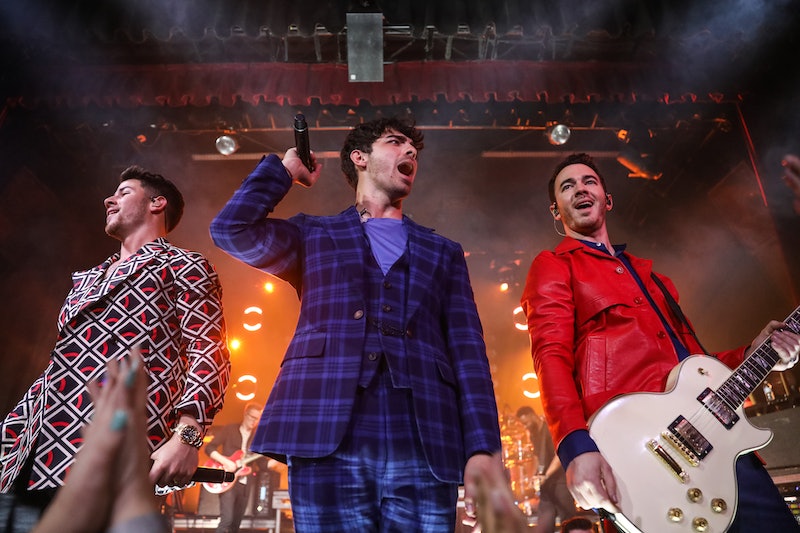 So 2019 got off to a pretty epic start for all late nineties/ early noughties kids out there, with the prospect of the Spice Girls reunion, some Busted tour dates, and, to top it off, the Jonas Brothers getting back together. JB fans worldwide rejoiced as they came back with a brand new single Sucker, which, of course, shot to number one immediately. They've since released another new song, Cool, which teases a new Jonas Brothers album. But what British fans really wanted to know is will the Jonas Brothers tour the UK this year?

Update: The Jonas Brothers have announced a UK tour, which will begin in Jan. 2019. The band are appearing in Birmingham, Dublin, London, Glasgow, and Manchester.

Previously: Last month, Nick hinted that there could possibly be an upcoming tour or more live performances, which saw speculation reaching fever pitch.

But now, thankfully, we can put the speculation to bed, because the boys officially confirmed during an interview with Radio Disney that they'll "definitely tour this year at some point." Hallelujah, I'm ready.

The boys have been keeping pretty quiet on any details of the tour, telling Radio Disney that they "definitely know" information but can't share it just yet. "We'll tell you when the time's right," Nick said. So secretive. What we do know is that they will be including some of their old songs as well as new songs for their upcoming tour. When asked if they will be playing their old classic, Joe told Radio Disney: "Yeah, for sure. I don't think we have enough new songs to do a long show. But we have plenty of old ones." So expect classics like Burnin' Up and S.O.S. to be added to the mix.

The Jonas Brothers have toured the UK before during their world tours, and since their comeback song did so well in the UK charts — almost knocking Lewis Capaldi's Someone You Used To Love off the top spot — surely they'll be back here again? Plus, Joe's wife-to-be Sophie Turner is British so it makes total sense.

Bustle has reached out to the band's reps to ask if there are any plans for performances in the UK. I'll let you know if I hear anything.

The brother's new songs have been pretty incredible, with the video for Sucker even featuring cameo appearances from their wives and fiancee. Now if that doesn't make you feel old I don't what will.

Their follow up single Cool is quite literally the grown up, adult version of their hit Burnin' Up. It's not just a follow up song because of the song's title (which, by the way... genius) but also because of the infamous "red dress" reference which comes back in Cool when Nick says "standin' there with the red dress on ya." Literally the comeback song to end all comeback songs. There's also a reference to split, which Nick has since admitted was largely due to him wanting to go solo. Joe sings "and now that we've made it, how complicated was last year?" Which is a direct reference to Nick's solo album Last Year Was Complicated in 2016. The video shows the boys looking really... well, cool in baby blue hues and big sunglasses, which is supposed to be an ode to '80s Miami. I'm here for it.

It looks like there could be a UK tour may be just around the corner. I honestly can't wait. It's been a long six years without you, boys. Welcome back.