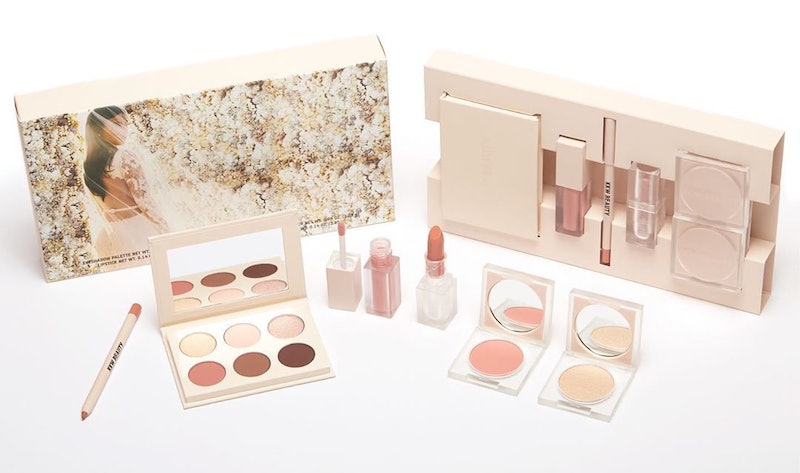 A new KKW Beauty hit internet shelves, and apparently, fans of Kim Kardashian and her eponymous makeup brand were ready for it. The new KKW Beauty Mrs. West collection sold out most items in 7 minutes, but will there be a Mrs. West restock? Fans of Kardashian's wedding look from her vows to Kanye West may be a little disappointed by the news.

The KKW Beauty Mrs. West collection launched on Friday, May 24, and the bridal collection inspired by Kardashian's own wedding look was almost entirely gone just 7 minutes after the launch. Of course with a sell-out so quick, Kardashian herself took to her personal Twitter account to let fans know the details on a restock, and unfortunately, there won't be one.

In a tweet sent out by the KKW founder on May 24, the Keeping Up With The Kardashians star explained, "I am so happy you guys all got the Mrs. West Collection. I know most of it sold out in the first 7 minutes but there’s a few items left. Unfortunately this is a limited edition collection and we won’t be restocking."

If you weren't able to get your hands on the KKW Beauty Mrs. West collection, it seems as if it won't be coming back around a second time.

While Kardashian didn't delve into details regarding why the collection was limited edition and wouldn't be restocking, there is a pretty likely reason why that is. Kardashian and husband Kanye West's wedding anniversary is May 24, the launch date for the Mrs. West collection. The entire bridal themed group of products was modeled after Kardashian's very own wedding look for her big day that was done by long time makeup artist Mario Dedivanovic.

While the vast majority of the Mrs. West collection is gone, including the palette, collection set, and lip set, there are few products that are still up for grabs on the website. The Love lipstick, Soulmate gloss, and Forever highlighter are all still available as individual items on the KKW Beauty website. However, if the 7 minute sell-out of the other products is any indication, they may be gone soon as well.

Could Kardashian change her mind and restock the collection? That's going to be up to she and her KKW Beauty team. While KKW Beauty hasn't restocked an item they initial said was limited edition, her KKW Fragrance line has.

Could KKW Beauty launch a bridal collection each year for the Kimye anniversary? Maybe, so keep your fingers crossed.

As of press time, you can still grab the lipstick, gloss, and highlighter over at the KKW Beauty site. However, a Mrs. West restock doesn't seem to be in the cards for now.