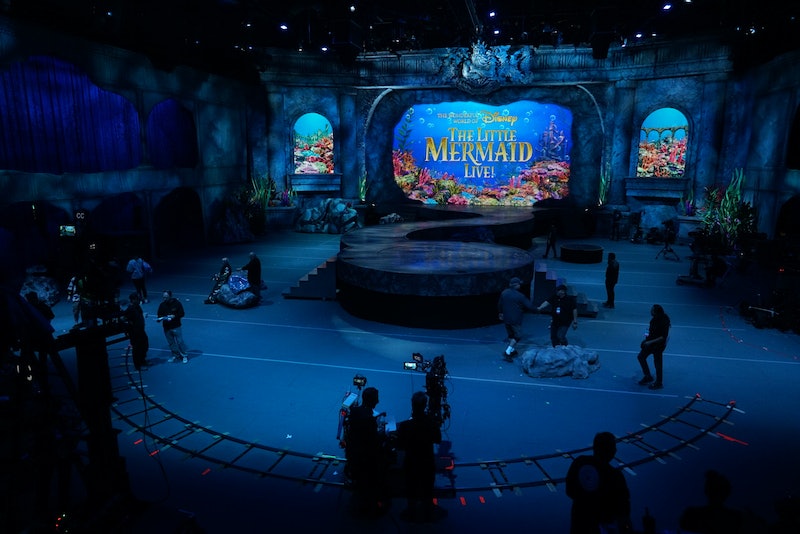 On Nov. 5, ABC will take fans "under the sea" with a live television interpretation of the classic Disney film, The Little Mermaid. The 1989 animated movie will be available to rewatch on Disney+ beginning Nov. 12, per ABC. But if you want to rewatch The Little Mermaid Live! starring Moana's Auli'i Cravalho, Shaggy, John Stamos, and Queen Latifah, you'll have to stream it on the ABC website or mobile app and you're going to need a cable authentication to do it.

Most of ABC's programming is traditionally available on Hulu the day after it airs. However, the network told Decider that The Little Mermaid Live! will not be. At the time of publication, the event will be available to rewatch with a cable account authentication on ABC.com 24 hours after it airs. Additionally, if you subscribe to Hulu Live or DirectTV's Sling with DVR, both of which offer ABC in their live-streamed cable packages, you can record the special on your personal account and rewatch it that way.

Why the sudden change? It likely has to do with the entrance of Disney+ and the ongoing decisions around where Disney's massive archive of content will ultimately land. According to Variety, the company very intentionally planned for The Little Mermaid Live! to premiere a week before the streaming service launched as a way to promote the platform.

"We wanted to launch it in November, in time to coincide with the launch of Disney+,” ABC network president Karey Burke told Variety in the same interview. “It felt like a great promotional platform to speak to that. And I didn’t want to do a lot of musicals for the sake of doing one. What felt right was to do something that was a classic Disney title. To have the support of the Wonderful World of Disney behind this, just felt like all the stars have now aligned for us to try our first [live TV musical] with this particular piece."

Unlike other live TV musical events like Rent: Live! and Grease Live! that featured live dialogue and song from its cast, The Little Mermaid Live! show will be "50 percent the original feature and 50 percent live musical performance," according to director and executive producer Hamish Hamilton. TV viewers will begin the experience by watching the movie and when it's time for music, the camera will pan out to find live performers for the musical numbers which will be pulled from both the animated film and the 2008 Broadway show, per TVLine.

The discussion around which of Disney's programs will stay with Hulu, its off-network partner, and which will live permanently on Disney+ is ongoing. “I expect shows that we have that are made decidedly more family friendly or are more in the Disney brand — Disney+ then becomes a potential platform downstream,” Burke told Variety, which implies that The Little Mermaid: Live! (and eventually the impending live-action film) could end up on Disney+.

So, if you don't have an ABC cable authentication, and you plan to rewatch any of Ariel's adaptations, you may want to go ahead and pre-order your Disney+ subscription now.

More like this
Rupert Grint Just Shared A *Major* Update About Ron Weasley’s Future
By El Hunt
'Abbott Elementary' Fans Probably Missed This 'Parent Trap' Easter Egg
By Sam Ramsden
At 28, Rosie Perez Risked Her Career To Stop Playing Stereotypes
By Gabrielle Bondi
Here’s Everything Coming To & Leaving Netflix In February
By Jake Viswanath
Get Even More From Bustle — Sign Up For The Newsletter
From hair trends to relationship advice, our daily newsletter has everything you need to sound like a person who’s on TikTok, even if you aren’t.