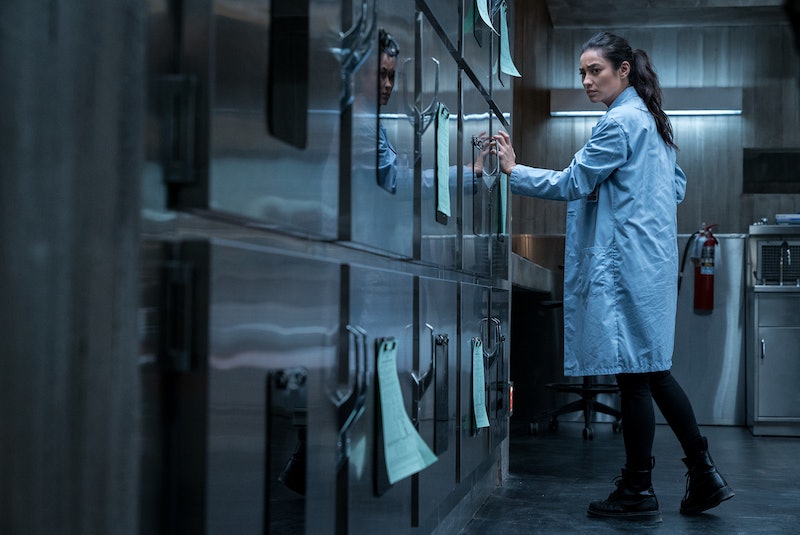 Horror fans who can't get enough of body horror with a hint of spirit had to be thrilled with the frightening trailer for The Possession of Hannah Grace, coming to theaters Nov. 30. With its creepy mortuary setting and Pretty Little Liars star Shay Mitchell taking on a more serious role, the film's likely to do well. We've gotten used to creepy possession stories spanning into meta-narratives like The Conjuring series, but will The Possession of Hannah Grace get a sequel, or is this chilling tale of potential supernatural interference to be enjoyed on its own merits?

The Possession of Hannah Grace follows new mortuary assistant Megan Reed (Mitchell) as she attempts to recover from recent trauma by taking on a new job that'll keep her from nighttime partying temptations. The fact it's dealing with the dead is fine with her — less people to judge and worry about her. A young woman's mangled body is brought in, the result, Reed's told, of an exorcism gone awry, though that doesn't spook her. "Once you're dead, you're dead," she says in the trailer. As the night goes on, Reed begins seeing and hearing things she can't explain — and she's not sure what would be the more horrifying explanation, that she's cracking up under pressure and can't trust her own mind any more, or that she was wrong about her disbelief in the supernatural.

There have been no plans announced yet for a sequel to The Possession of Hannah Grace. Dutch director Diederik Van Rooijen has completed work on vampire clan TV series Heirs To The Night and is slated for an as-yet undetailed 2019 project called Penoza, per IMDB. So even if a sequel were to happen down the line, it'd be a few years out or have to find another director.

Producer Sean Robins doesn't have any sequels slated either — he's currently working on a George Jones/Tammy Wynette movie without a title, though as he told Creative Screenwriting, he usually has about 75 active film projects and 10 to 15 TV projects in various states of development going simultaneously, and that "if we love a project it never truly becomes inactive." It could be that a Hannah Grace sequel makes its way onto his slate, but assembling all the pieces of a movie takes time, if it's even happening.

In Daily Dead's interview with Robins, he noted that The Possession of Hannah Grace took five years to get off the ground, changing quite a bit on the way (including moving from a PG-13 to an R rating). But don't be totally disappointed; Hannah fans looking for similar scares have something close enough, possibly even better, coming up.

The next project from Hannah Grace scriptwriter Brian Sieve is called The Exorcism At Lincoln High. Information is scant, but according to its IMDB page it's about a high school misfit cursed by a group of students who then becomes possessed by a demon; the students who cursed her have to find a way to exorcise the evil. There's no release date set, but review blog Stomp And Stammer notes filming began in February 2018 at an empty Albany high school, with director Steve Miner at the helm. That's a name that'll perk up the ears of any horror fan. Miner also directed Friday The 13th Part II and 3D, cult favorite Warlock, and possessed house film House.

If that doesn't satisfy fans, there are plenty of additional horror films slated for 2019, though so far none with a specific possession angle. For that you'll have to dig through the ghosts of horror past to find films that'll possess you with fear, fortunately it's a rich subgenre that goes far beyond just The Exorcist.