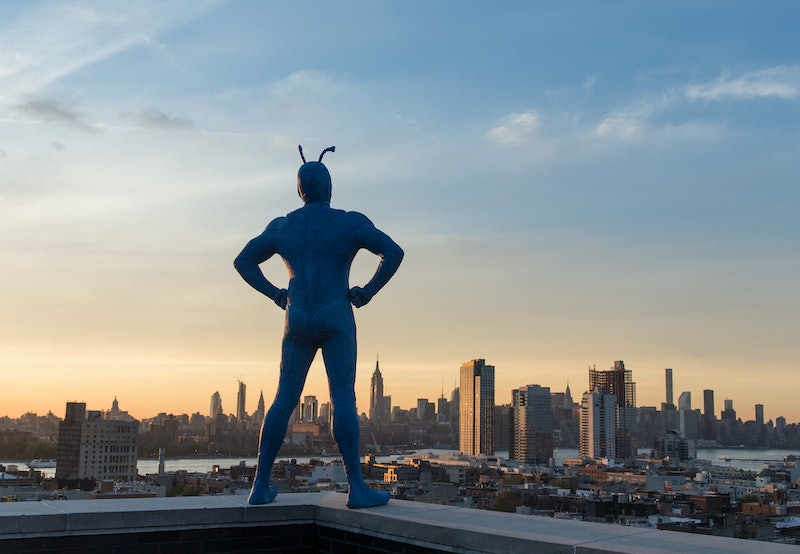 In this era of remakes and reboots, it seems that every beloved television show is getting a second chance at life. The latest show to be brought back to life is The Tick, which premieres its full first season on Amazon over 15 years after the original ended. Of course, the version of The Tick airing on Amazon isn't directly related to the 2001 Fox series, despite both being based off of the same comic book. The first series, while beloved by many, ended after only nine episodes. But, if the first one was cancelled so quickly, what are the chances that the reboot of The Tick will return for Season 2 on Amazon?

The first live-action iteration of The Tick wasn't even the first time the large blue bug had been on television. An animated Tick cartoon aired for three seasons in the '90s. The new Amazon series will be The Tick's third new series in two decades, but will this new series be the version of The Tick that sticks? While the original live-action adaptation is fondly remembered as a one-hit wonder, The Tick may get a second season this time around because the world needs a show like it in 2017.

The Tick was born in the late '80s as a parody of other popular comic book superheroes characters. The Tick had the same earnest and confident nature of Captain America or Superman, without the smarts to back it up. He was a perfect parody for the time, but the comic book superheroes of the late-'80s are much different than modern day television superheroes. Times have changed for superhero stories, but The Tick's latest form is the perfect character to poke fun at the modern superhero genre.

Superheroes had been on film and television for decades by the time the first live-action version of The Tick aired. But now, DC and Marvel both have established movie universes and network television airs shows like Arrow, The Flash, Legends Of Tomorrow, and Supergirl, while Netflix features Daredevil, Jessica Jones, Luke Cage, and Iron Fist. TV is rife with superhero shows in a way that simply wasn't true in 2001, meaning that The Tick has returned at the perfect time.

While The Tick was designed to parody the superheroes of the '90s, the Amazon show and character have evolved to satirize the heroes of 2017. He and his sidekick, Arthur, aren't yet caught up in major cosmic conspiracies, time travel, or many of the fantastical things that superheroes combat in other shows. Instead, they are caught up in minor scuffles that beg viewers to ask, "Should someone be a hero just because they have the chance to be one?"

In a world where Superheroes are an inescapable part of culture, The Tick has arrived at the perfect time. Perhaps the 2001 version of The Tick only lasted for one season simply because is was serving as a parody of something that wasn't as widely known. Now, The Tick is attempting to take down one of the most profitable genres of film and television, and will likely bring in both first-time viewers and fan of the original live-action show. The Tick has not yet been ordered for a second season, but the show's relevance alone is likely worth renewing for Season 2 — plus, reboots and revivals are, like, really in right now.