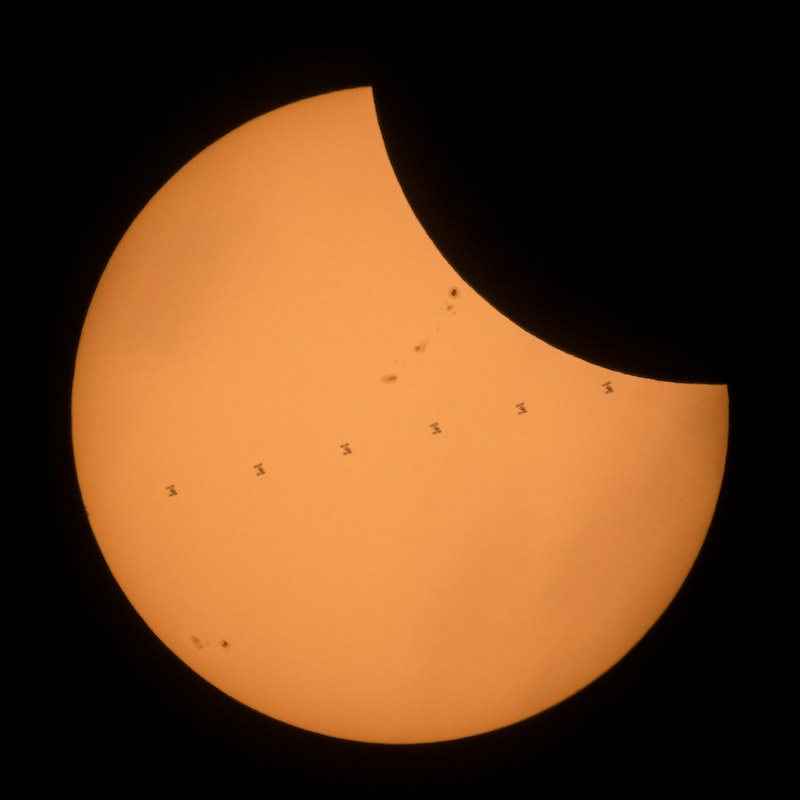 If a partial solar eclipse happens but no one sees it, did it even happen at all? You're going to be asking yourself this question soon, because if you were wondering whether or not the U.S. will be able to see Feb 2018's partial solar eclipse, I'm sorry to tell you that it's not looking good... literally.

This partial solar eclipse will be only visible from parts of Antarctica, the Atlantic Ocean, and southern South America. So for us folks here in the United States, we're going to have to just hope that between the people of southern South America, the dolphins in the ocean, and the cool Antarctica population, someone's going to Instagram the event and we can live through it vicariously. Or, at the very least, hope that someone at NASA has us covered. We're not going to see anything special happen during the day, not to mention, on the East Coast, meteorologists are already anticipating cloudy skies and precipitation, so likely we won't see the sun at all.

But before you get all huffy and bummed out about missing the partial solar eclipse, might I remind you that the United States had front row seats to one of the most epic total solar eclipses just a few months ago? Not to mention, on Jan. 31, we got a partial lunar eclipse, after two super moons, a blue moon, and a blood moon. So it's not like we've had any shortage of celestial events to look forward to. The year 2018 has been already jam-packed with great excuses to star gaze. We don't want to get jaded by too much astronomical events or else they'll start to seem lackluster and less important and special and rare than they really are.

That said, here's some celestial activity we've got to look forward to actually seeing from the United States:

There's a planet parade! Saturn, Mars, and Jupiter will hover near each other in the sky, and the moon will join them making one hell of an Instagram if you can get it.

The planet Mercury reaches greatest eastern elongation, making it the best time to get a good look at the planet, less than 19 degrees from the sun. You can look for the planet hanging low in the sky, just after sunset.

Lyrid meteor shower will show, with up to 20 meteors per hour at its peak. Look out for bright burning dust trails, beautifully dancing across the sky.

Venus and the moon will kiss! When you look up at the moon before you go to bed, you'll see Venus right next to it. The moon will just be a sliver, but the light from Venus will help you see parts of the moon that aren't even lit.

Mars will show off! Looking fierce and red and bright on this night in the southern sky, you might finally notice it as more than just a small twinkly thing that looks like a star. If you see something that looks red or orange, it's not a plane, it's Mars.

An epic meteor shower, the Perseids itself! Perhaps the most epic all year, with up to 60 meteors shooting across the sky an hour at the peak. It will be actually hard to miss out on the action from the Northern Hemisphere, so plan to spend your night outside, it will definitely be worth the sights.