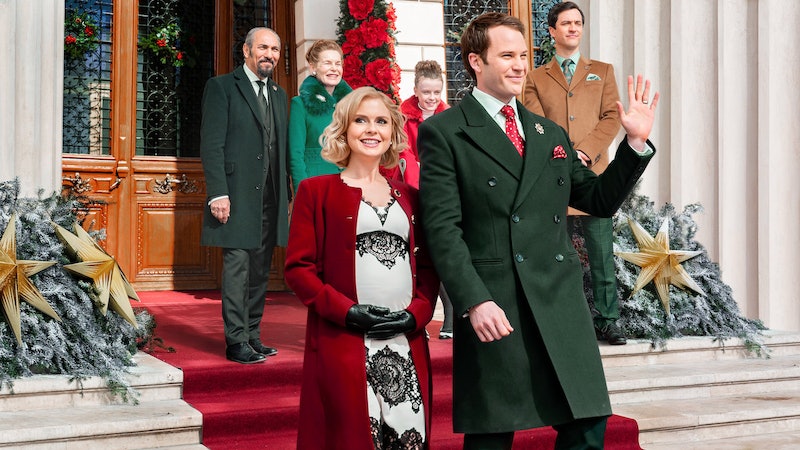 Netflix is going all out for the holidays with a third Christmas Prince film featuring a royal baby, ancient documents, and even a curse. A Christmas Prince: The Royal Baby takes the story of Aldovian power couple Queen Amber (Rose McIver) and now-King Richard (Ben Lamb) from fairytale marriage to fantastical whodunit. One mystery that remains to be solved, though, is the future of the series. So will there be A Christmas Prince 4? It's likely the series will remain the gift that keeps on giving to Netflix subscribers.

News of the third movie was confirmed in March, so following that logic, fans should expect to wait a few more months for official word on the future of their favorite fictional royal couple. But given the series' popularity and the fact that Netflix seems to be giving Hallmark a run for their money with Christmas-centric original films and programming, the chances of yet another sequel featuring the royal baby of Aldovia seem pretty good.

So far, Amber and Richard's adventures have mirrored their IRL royal couple counterparts Prince Harry and Meghan Markle. A Christmas Prince: The Royal Wedding came out just a few months after Meghan and Harry tied the knot, and now that royal baby Prince Archie has arrived, it's Amber and Richard's turn to welcome an heir to the throne. So what could possibly be next for the Aldovians should the Christmas Prince franchise get another sequel? Here are some ideas.

The Dutchess and Prince are spending this year's holidays away from the royal family with the Queen's blessing, hanging with Meghan's mother Doria Ragland instead. Could a potential Christmas Prince 4 follow in the footsteps of Home Alone 2, with the royals lost in New York? There's plenty that could go delightfully wrong if Amber and Richard head back to the Big Apple to visit Amber's dad, including a reverse fish-out-of-water scenario, with the royals trying and failing to remain undercover.

A Christmas Prince got an acorn-shaped nod in Netflix's other royalty-related Christmas film The Knight Before Christmas, confirming the two films exist in the same universe. That universe includes a time-traveling 14th century prince. Perhaps A Christmas Prince 4 could take a trip back into Aldovian history, or even visit some of the royal greats of yore elsewhere. Given that Royal Baby has sacred documents and ancient curses, time travel seems like a next logical step for the series. Who knows, Christmas Prince 4 could even have the Royal Family meet Charles Dickens for some Christmas Carol inspiration.

If Aldovia's royalty mirrors England's, that might be bad news for the kingdom, as Prince Charles has eyes on trimming down the royal family. If Harry and Meghan might be excluded from the crown, what of the Aldovian heirs? Perhaps the royal family could learn the true meaning of Christmas with a scare that they might revert to commoner status.

While it's too early to truly say what a possible Christmas Prince 4 could offer, one thing's for sure — it wouldn't feel like Christmas anymore without a visit to Aldovia.