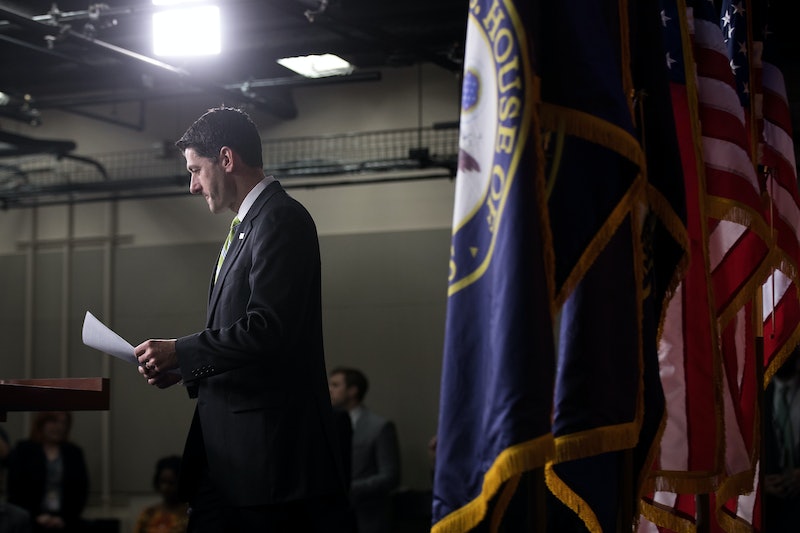 Now that the bill to repeal and replace Obamacare has failed to attract enough votes to even warrant a vote, the question of whether there will be another AHCA vote looms. Chances are, the version of the AHCA as it currently stands will not undergo another attempt at a vote in the House. However, that doesn't mean the piece of health care legislation won't be tweaked again and again until it's deemed acceptable by more members of the Republican Party. In that case, a new version of the AHCA — whether it goes by a new name or not — could go to the House floor.

But seeing as Trump has promised to focus his full attention on tax reform next, it will likely be quite some time before Republicans shift their efforts toward health care again. Instead, they're more likely to let Obamacare "implode," as Trump has suggested it will. In fact, following the AHCA's failure, Trump spoke on the matter, saying that he would be willing to reconsider the health care bill if and only if Obamacare "implodes."

And Ryan seems to agree. Following the AHCA flop, Ryan held a press conference saying that whether Republicans like it or not, they're stuck with the Affordable Care Act for the time being:

Even before Friday, the future didn't look so bright for the AHCA House vote. On Wednesday, Trump and Vice President Mike Pence met with the House Freedom Caucus to negotiate changes to the bill. Namely, the far-right leaning group wanted Ryan to take away the 10 essential health benefits laid out by Obamacare. But they weren't the only ones that doomed the bill.

Moderate Republicans felt uncomfortable supporting a bill that would cause many of their constituents to lose health care due the rolling back of the Medicaid expansion. On top of that, elderly people would suffer major setbacks due to the bill.

The Congressional Budget Office analysis published Monday suggested that people 50 years old or older would experience the biggest coverage losses under the new health care legislation. For moderate Republicans who have elderly or lower-income constituents, this is a huge problem.

On Friday, Trump hinted that he's moving on pretty quickly. In a discussion with White House reporters, he said that it's time to focus on something new:

I would say that we will probably start going very, very strongly for the big tax cuts and tax reform. That will be next.

So, until the U.S. tax code is reformed, don't expect a vote on the AHCA.