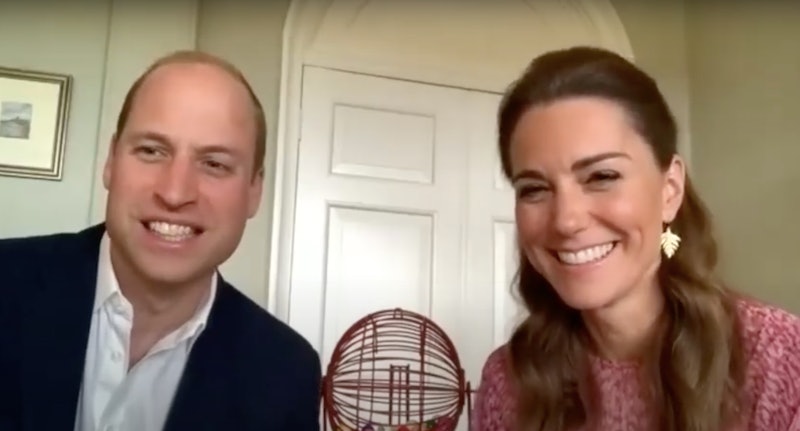 The Royal Family/Youtube
By Orla Pentelow
May 22, 2020

With their public appearances put on hold for the time being, the Duke and Duchess of Cambridge have become the reigning champs of Zoom video calls since lockdown hit the UK. From launching their ‘Every Mind Matters’ campaign to Easter calls with Casterton Primary Academy, the couple has successfully made the transfer to digital in their line of work. Their latest virtual visit? Prince William and Kate Middleton hosted a bingo session with care home residents in Wales.

On Wednesday evening (May 20), Will and Kate joined residents from the Shire Hall Care Home in Cardiff via video call as the residents played their weekly round of bingo. In a video released on their Youtube channel and social media platforms, the royal couple also heard from members of staff at the Shire Hall home in Cardiff Bay, who said the morale was “lovely” despite the extra pressures caused by the pandemic. The duke said he had “never known Welsh people not to know how to have fun,” before asking for tips on how to make the bingo session run smoothly.

Taking on the role of hosts from their home in Norfolk, Will and Kate took it in turns to show the numbers to the room. The royal couple got into the spirit of the game, attempting the bingo lingo when choosing a ball. William said: “one little duck, number two”, before Kate reached for the next, saying: “Eight and seven, 87. Six and two, tickety-boo.”

Like any good games night host, William was keen to get some feedback on their performance. Winning resident Joan Drew-Smith asked the couple how they were, with William saying “We're very well thanks”, before asking: “How did we do at bingo? We did OK?” The pair were reduced to a fit of giggles after Ms Drew-Smith explained that their performance was good, but “wasn't as good as it should have been”.

The duke conceded that the pair had room for improvement, and laughed as he told the group: “We'll say a big thank you and goodbye to everybody. We'll try and do a bit better at bingo next time.”