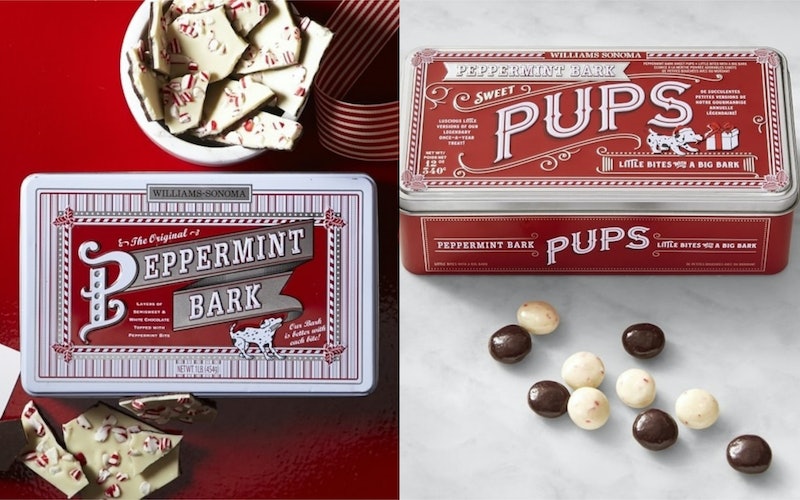 I am a firm believer that the period between September and the beginning of January is the best time of year. We start with fall; we ease into the Halloween season; then comes Friendsgiving season; and lastly, we get the myriad winter holidays that occur throughout December and early January. And now that we’re just over the Halloween hump, the winter holidays are closer than ever — which means Williams Sonoma’s Peppermint Bark is back for 2018. This year actually marks the 20th anniversary of the stuff’s initial debut, too — and as a result, there are tons of options available this year. From the original bark itself to a whole bunch of treats inspired by it, there’s something here for everyone. Hoorah!

Williams Sonoma didn’t invent peppermint bark, of course; chocolate bark has been around in one form or another for quite some time. It’s believed to be a variation on the French candy known as mendiants — the little chocolate discs studded with nuts and dried fruit given out around the holidays. The nuts and fruits symbolized the four major mendicant orders of the Roman Catholic Church: Almonds represented the Carmelites, hazelnuts the Augustins, figs the Franciscans, and raisins the Dominicans.

Chocolate bark takes that same idea and tweaks it a bit: Instead of individual discs of chocolate, it consists of a large sheet of the stuff that’s broken into many pieces. As Mental Floss notes, the peppermint variation, which usually features crumbled up candy canes, peppermint extract, and both white and dark chocolate, has been sold in the United States at least since the 1960s — but in 1998, Williams Sonoma created their version of the treat, and, well… there was no going back. It was a huge hit, and over the past 20 years, it’s become a staple of many people’s holiday celebrations each winter.

Williams Sonoma’s Peppermint Bark features a custom blend of Guittard chocolate and triple-distilled oil of peppermint. To make it — a process which takes 24 hours from start to finish — master candy makers start by melting dark chocolate and pouring it across a marble slab. It’s then topped with chocolate and tons of peppermint candy pieces.

In 2018, W-S's culinary experts have made a whopping 24 different Peppermint Bark products available for our holiday celebrations. Here are a few highlights — but if peppermint bark is your thing, you’ll definitely want to head over to Williams Sonoma to check out the full array of offerings.

The classic that started it all!

Looking for something a little richer than the original? This dark chocolate variation skip the white chocolate; its base is semisweet and bittersweet chocolates. Also, there’s more than just peppermint candy on top — cocoa nibs have come to join the party, too.

Can’t pick between original, Dark Chocolate, or Salted? Good news: You don’t have to. Try all three of them with this sampler pack.

Williams Sonoma’s Peppermint Bark mascot has long been an adorable Dalmatian puppy — so naturally, they’ve started leaning into that idea hard. This treat takes the classic Peppermint Bark you know and love and shapes it into something closer to a traditional mendiant — but with a twist: They look like little puppy paws. Awwww.

If you prefer your sweets bite-sized, these little morsels should do the trick.

These bark-inspired treats consist of chocolate wafer cookies covered with peppermint oil-infused white chocolate, all topped off with a dusting of peppermint candy. Yes, please!

I don’t always eat pretzels, but when I do, they’re covered in chocolate.

Not going to lie: This is by far my favorite Peppermint Bark pick for this year. The kit includes everything you need to make fudgy chocolate brownies topped with white chocolate ganache and peppermint candy bits; just add your own eggs, butter, and cream, and you’re ready to go.

Is ice cream a fall/winter thing? Not usually. Would I make and eat this anyway? ABSOLUTELY. Now if only I had an ice cream maker…