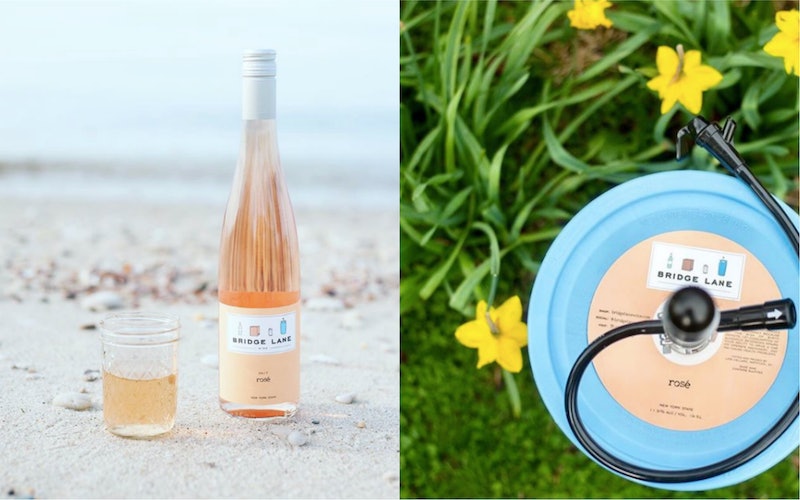 bridgelanewine/Instagram
By Lucia Peters
May 15, 2018

And today in Things I Didn’t Even Know I Was Missing, we have this: Kegs full of rose wine are a thing. They are made by a wine label called Bridge Lane, and I am now immediately planning a barbecue purely so I can get one to share among my nearest and dearest. Mimosas in bottles? Pffft. That’s so last week. Who needs a bottled cocktail when you can have a literal keg of wine?

Bridge Lane is the creation of Lieb Cellars, a farm-winery in the North Fork region of Long Island, New York. While Lieb Cellars have been around since 1992, Bride Lane is more recent; according to Hamptons Magazine, the label launched in 2004. The goal, according to the Bridge Lane website, was to create “fresh, light, dry, fruit-forward” wines that “aren’t meant to be studied and drunk in fancy glasses,” but rather are intended for “casual sipping and sharing with friends” — which, I would argue, makes them the perfect backyard barbecue wine. The label makes five wines — a white merlot, an unoaked chardonnay, a sauvignon blanc, a red blend, and a dry rosé — all of which are available in 750ml bottles, 3L boxes, 375ml cans, and 20L kegs. They look like this:

The rosé keg is our point of interest today, because… well, few things are as eye-catching as a keg full of rosé. Bridge Lane’s version is Cabernet Franc-based — that is, it’s made of one of the parent grapes of the perhaps better-known Cabernet Sauvignon (the other parent grape for Cab Sauv being Sauvignon Blanc). According to Sommelier Q&A, we don’t quite know where Cabernet Franc came from, although there’s evidence to suggest that the grape originated in the Basque region of France. These days, it’s grown not only in France, but also in Italy, Spain, Germany, South America, North America, Australia, New Zealand, and South Africa — and according to Vine Pair, Long Island’s North Fork is known for its Cabernet Franc grapes. It makes sense that Bridge Lane would use it, no?

As a red, Cabernet Franc is “medium bodied with distinctive aromas of flowers, herbs, and red fruits,” per Sommelier Q&A; although it’s not very sweet, it often tastes of raspberry and other dark fruits with notes of herbs and black pepper. It’s got a high acidity, which makes it easy to pair with a lot of foods — but Wine Folly has a fool-proof pairing tip, just in case: When in doubt, pair it with the actual herbs in whatever you’re serving.

As a rosé, Cabernet Franc tends towards the fruity and floral, sometimes with a punch of citrus. Bridge Lane’s version doesn’t seem to have any citrus, but it does match up with the fruity/floral trend: It’s described as tasting of “guava and peach blossom followed by flavors of strawberry and watermelon.”

The kegs aren’t cheap — each one will set you back $240 — but given that they’ve got the equivalent of nearly 27 bottles of wine inside, they’re by far the most cost-effective option if you’re having a sizeable party. (For the curious, a 750ml bottle of Bride Lane’s rosé is $20, so if you were to buy 27 bottles of the stuff, you’d be spending around $540 — more than twice the cost of a keg.)

Besides the showy nature and high capacity of a keg, are there any benefits to the actual wine when you store it in a keg over, say, a bottle or a box? In a word: Yep. In a 2015 piece for Vine Pair, Adam Teeter spoke to a number of folks at the forefront of the kegged wine trade and found a number of reasons kegs are likely the future, rather than a fad. For one thing, wine in a keg can’t get corked, oxidized, or cooked in transport, meaning you’re less likely to lose it before it’s even sold. Said Dan Donahoe, CEO of wine-in-keg supplier Free Flow Wines, “There’s a reason Jim Clendenen of Au Bon Climat chooses to put some of his most popular wine in kegs. He knows his premium product is going to taste exactly as it did when he put it in the keg, which, for a wine that is meant to be sold by the glass, is a very important thing. A bottle doesn’t give you that same confidence.”

Bridge Lane’s kegs are good for up to six months unopened; once you’ve opened or tapped them, they’re good for two days with a regular old keg tap and four weeks in a kegerator. The kegs don’t come chilled, so — particularly if your keg is filled with rosé or one of the whites — you’ll want to make sure you chill yours for at least three hours before you tap it. They also don’t come with taps, so make sure you’ve got one of those on hand; you can order Bridge Lane’s Pony Pump along with your keg if you like, but any tap that will fit an “American style single valve keg (also known as 'Sankey D')” will work.