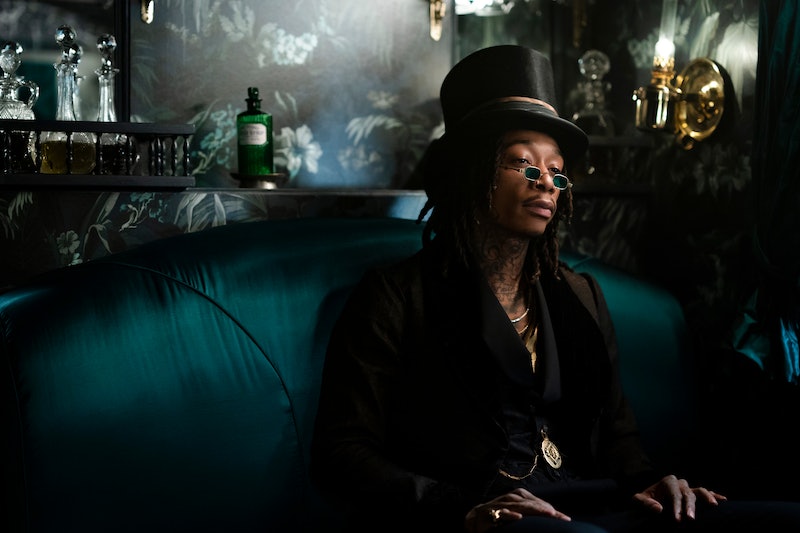 The famed poet Emily Dickinson never married in real life, but in Apple TV+'s Dickinson, Emily has a preoccupation with a different kind of love interest: Death itself. Wiz Khalifa's Dickinson character is the personification of Death, and his presence in Emily's life speaks to the many facets of her: her disinterest in the present, her longing for the unusual, and her eventual literary immortality.

Dickinson opens with a distracted Emily, who is so busy appeasing her family and fielding marriage suitors that she can't find the time to finish her now famous "Because I could not stop for death" poem. When her latest suitor — who turns out to be her lit club friend George — asks why they can't just get married, she tells him it's because she's already in love with someone else, someone who "can't be killed."

"He is Death. I'm in love with Death," she informs George matter-of-factly. "He takes me out for a carriage ride every night. He's such a gentleman. Sexy as hell."

Emily sees Death's ghostly horse-drawn carriage several times in the episode, but it isn't until her father explodes at her for daring to try to publish one of her poem's in George's literary magazine that she runs off to meet the grim reaper. She chides him for being late, and Death expresses wonder over her eagerness to be with him. "Most people would be glad if I never came," Death says as Emily sits down in the carriage.

"Not me. I always want to see you," Emily responds. Then they smoke a joint together.

"I wanted Death to be the coolest guy in the world because Emily is in love with Death,” creator Alena Smith told EW. “Part of the story of the season is about her coming to a more realistic and mature understanding of Death, but where she begins is a kind of goth worship.”

For Emily, idolizing Death is not a sign of suicide ideation, but of how Death represents several escapes for her. (Some scholars theorize Emily may have had some form of bipolar disorder that influenced her writing, but it's impossible to prove.) There's the literal meaning of dying and what happens after, which the real Emily explored constantly. Death was Emily's greatest muse; as Emily's niece Martha Dickinson Bianchi noted in The Life and Letters of Emily Dickinson, she was “eternally preoccupied with death," and wrote over five hundred poems on that subject alone. In The Cambridge Introduction to Emily Dickinson, Wendy Martin writes, "Death was the problem for Dickinson, a riddle she could never solve, but which she always explored." This is strongly reflected by Emily's subplot with her best friend — and apparent lover — Sue Gilbert, whose loss of her last family member pushes her further away from Emily and into the arms of Emily's brother, Austin, much to Emily's frustration. Emily has a fascination for and even friendship with Death, and yet his actions sometimes confound and wound her.

In Dickinson, Death also symbolizes all the times when Emily slips from the present to daydream about working on her poetry. It's extremely meta that it's one of Death's poems that keeps Emily distracted from her family and chores, to the point where she's being reprimanded constantly. "Your kind of immortality won't come from following the rules. It's going to come from breaking them," Death tells her in the carriage, noting that she's going to be the only Dickinson anyone talks about in two hundred years. And he's right — "Because I could not stop for Death" is taught as a part of the high school curriculum, making Emily a present day American literary icon.

It's also fitting that one of Emily's greatest poems was written from the perspective of somebody who's already died. Emily published ten poems during her lifetime, but they were all anonymous; it wasn't until Emily Dickinson's death that her sister Lavinia worked to publish her massive trunk full of poems that the world finally met the real Emily. Death, in a way, gives voice to Emily twice: first by being the subject of her work, and then by being the reason Emily is discovered at all.

Finally, Death lets Emily in on things that an ordinary person shouldn't know about: that a war is coming that will claim many lives, and that she'll become immortal one day. Death functions as the ultimate symbol of how Emily is just living ahead of her time, existing in a future where people don't judge her by her marriage prospects or her ladylike accomplishments, but by the words she puts on the page.