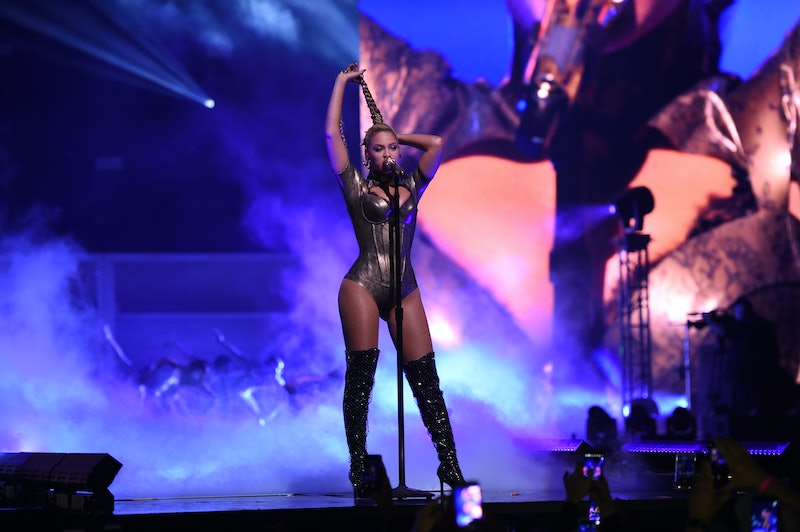 After a week of headlines theorizing about what exactly Donald Trump gets up to in his spare time during trips to Russia, I'm ready to read about something a little happier. Something to put a spring in my step, if that's possible, less than a week before the incoming president-elect and former TV entrepreneur takes his place in the White House. So put your hands together for this year's premiere imaginary music festival: Wokechella. The idea was sparked by an article from New York Magazine's The Cut who, on receiving a press release with a celebrity-studded lineup for the Women’s March on Washington (Katy Perry, Cher, Amy Schumer, Samantha Bee, Debra Messing, and Julianne Moore will all be in attendance), made the following observation:

... the march has all the ingredients for a politically enlightened music festival lineup: Wokechella on the Mall, 2017’s most empowered celebrity branding opportunity.

The article was astute about the issues that the numbers of celebrities at the Women's March raises — namely, that stars didn't manage to change much last time around, despite their almost unanimous support for Hillary Clinton. And that while celebrities fuel publicity, they're also more likely to make "the march less a unifying event than a collection of viral moments." But all the same, Wokechella was a funny idea. And so, snaps to writer-producer-creative strategist Debbie Saslaw, who came up with the following imaginary lineup for the festival and posted it to Twitter:

With the festival boasting events like "Gloria Steinem & bell hooks Watch All Six Seasons of Sex & The City" and "Maya Rudolph Performs Formation in its Entirety in One Hour-Long SNL Sketch," I cannot tell a lie: I badly want this to be a real thing.

I know, I know. I'm completely missing the point — this was inspired by an article bemoaning the way celebrity involvement complicates, rather than abets, political protest. But: “Malala & Anna Kendrick Teach Blondie How To Use Snapchat With Cups (“When I’m Gone” from the Pitch Perfect OST).” But also: “Selena Gomez in Conversation with a Hologram of Selena Quintanilla-Perez.” I am but human. What do you want from me? Asking me not to hope for an event in which we can see Aretha Franklin's hat perform is madness.

So, if wishing for "having it all" means crossing your fingers for a world in which the Women's March can remain focused on politics — not celebrities — and engaging a new generation in activism, and also for a world in which Wokechella becomes A Real Thing (ideally at a time and place where it wouldn't detract from larger issues), then that's what I'm going to go ahead and do. Screw wishing for that all-important combo of career, family life, and a envy-inducing vacation home. I just want to see Schumer perform dressed as a giant IUD.