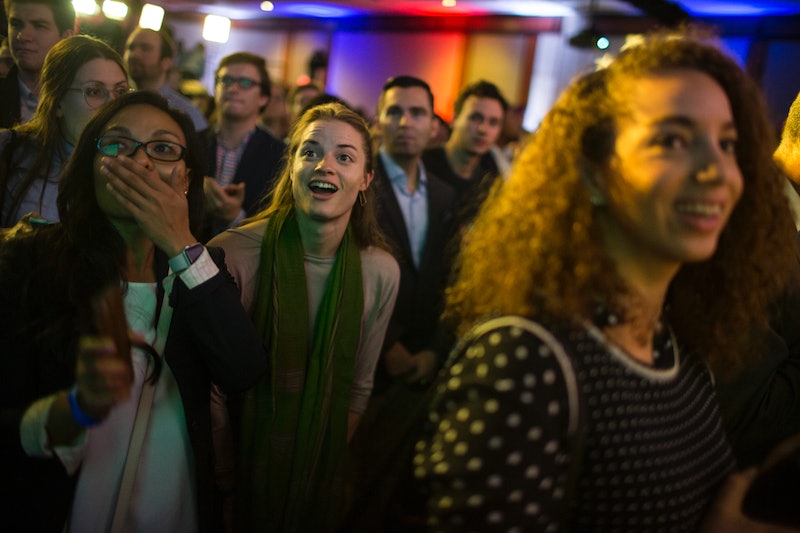 You probably knew going into this election that 2018 was poised to be the second coming of the Year of the Woman. Now that the election results are in, you can finally look at all the historic "firsts" from women candidates in the 2018 midterms. From local races to Congress, women have a lot to celebrate.

For starters, the primary races already produced a record number of female candidates for the House and the Senate, as CNN reported, which partly came down to the fact that more women were running for elected office than ever before. Many of them were coming into the races with more experience than their male counterparts, according to an analysis by FiveThirtyEight, and a number of them were also bringing new levels of diversity to their respective races.

If you followed the campaigns in advance of Tuesday, you probably already recognize some of the names: Stacey Abrams, Sharice Davids, Ilhan Omar, Rashida Tlaib, and many, many more. And then there was the biggest question — would the appearance of women's massive excitement and motivation before the actual day really turn into huge women's turnout?

Well, now you have at least some of those answers. For starters, a slew of Democratic women will be heading to the U.S. Congress in 2019, a testament to the seismic, grassroots swell of women entering elected politics over the last two years. The House, in particular, will see some new women members of Congress who've broken major boundaries on race, age, sexual orientation, and political orientation.

There are women like Tlaib and Omar, who are the first two Muslim-Americans ever elected to the U.S. Congress, representing Michigan and Minnesota respectively.

In the state of New York, there's incoming representative Alexandria Ocasio-Cortez, who is the youngest woman ever elected to Congress, in addition to a self-avowed socialist, endorsed by the up-and-coming Democratic Socialists of America. She's joined by a fellow DSA-backed, incoming state senator from New York, Julia Salazar.

The Empire State also made history with the election of incoming Attorney General Tish James, who'll be the first black woman ― in fact, the first woman, period ― to serve as the state's top law enforcement official.

And of course, there's Sharice Davids, Deb Haaland, and Peggy Flanagan, a trio of Native American women who'll now be serving as the representative from Kansas' 3rd Congressional District, New Mexico's 1st Congressional District, and the lieutenant governor of Minnesota, respectively. This has been a banner year as far as Native American candidates succeeding in national politics.

The 2018 midterms will send more women to Congress than ever before. As The Washington Post noted on Tuesday, the U.S. Congress has never been comprised of more than 20 percent women, a proportion of female lawmakers that lags behind a number of other nations throughout the world, including the United Kingdom.

At the state level, there were some groundbreaking results for women in politics as well. In New Hampshire, Melanie Levesque made history by becoming the first black woman ever elected to her state's senate. Similarly, Nickie Antonio became the first openly LGBTQ member of the Ohio state senate.

On the whole, this was the most successful election cycle for women in decades, dating back to the "year of the woman" cycle in 1992. That year, a then-record number of women ran for office and won in the aftermath of the galvanizing Supreme Court confirmation process of Justice Clarence Thomas, who denied allegations of sexual harassment made by professor Anita Hill.

While the United States still has an incredibly long way to go to achieve equal gender representation in politics, Tuesday night's results will push the total number of women higher than ever before. It's the natural culmination of a dramatic surge of participation that began following the election of President Donald Trump in 2016, and at this point, there's no indication it's going to slow down.