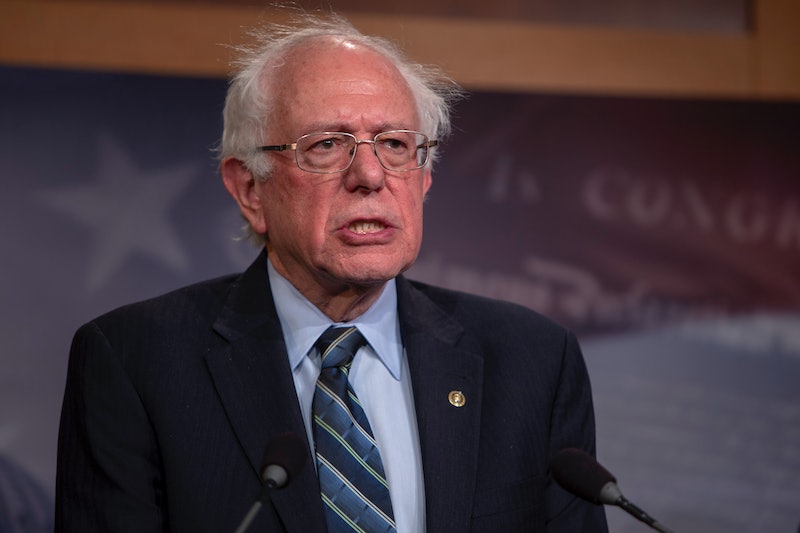 As the junior senator from Vermont reportedly weighs a 2020 presidential run, several women on Bernie Sanders' 2016 campaign team told the New York Times that they witnessed or were subjected to sexual harassment and other forms of sexism during the campaign. Former campaign workers said their superiors didn't take allegations of sexual harassment within the campaign seriously, and that some women on the campaign were initially paid less than men in similar positions. Bustle has reached out to Sanders' Senate office for comment.

The Times report comes days after a Politico report that over two dozen veterans of Sanders' 2016 campaign sent a letter to the senator's office concerning "sexual violence and harassment" on the campaign in an attempt to "mitigate the issue in the upcoming presidential cycle." The authors of the letter confirmed its authenticity to Politico.

Sanders' campaign committee, Friends of Bernie Sanders, released a statement addressing the allegations in the Times report. It said:

Friends of Bernie Sanders does not and will not tolerate harassment or discrimination of any kind.

During 2016 there were a number of HR actions taken, and while it is not appropriate to discuss them individually, actions taken range from employee counseling to immediate termination from the campaign.

Last year, during the 2018 Senate campaign, we developed and implemented robust policies and processes regarding discrimination and harassment that included features such as a third party toll free hotline for reporting incidents outside the structure of the campaign and requiring all staff and volunteers to undergo training as part of the on boarding process.

Giulianna Di Lauro, a Latinx outreach coordinator on Sanders' 2016 campaign, told the Times about an incident involving her and Marco Antonio Regil, a Mexican game show host and surrogate for Sanders. Di Lauro was tasked with driving Regil to campaign events ahead of the Nevada primary, and she told the Times that he grabbed her, touched her, and generally pushed her boundaries throughout the course of one February day.

When Di Lauro told Bill Velazquez, a manager on the Latinx outreach team, about Regil's behavior, the Times reported that Velazquez laughed and said, "I bet you would have liked it if he were younger." Di Lauro and a female staffer who witnessed the exchange told the Times about that response. Di Lauro said that she also told several other higher-ups on the Sanders campaign about her encounter, but that they never took action to address it.

Velazquez told the Times that he doesn't remember making that remark to Di Lauro, and said he reported her accusation to his superiors at the time. In a statement from his agent to the Times, Regil said that he "sincerely apologize[s] for any interactions or behavior on my part that could’ve made anyone feel uncomfortable."

“I did experience sexual harassment during the campaign, and there was no one who would or could help,” Samantha Davis, former director of operations for Sanders' campaign in Texas and New York, told the Times. She said that a supervisor of hers invited her to his hotel room and that when she declined, he "marginalized" her, according to the Times.

Sarah Slamen was the campaign's state coordinator in Louisiana and later helped create Our Revolution, Sanders' post-election political organization. Slamen told the Times that during an Our Revolution steering committee meeting, a male staffer berated her for "suggesting an organizing plan." She voiced her concerns about sexism to other committee members, according to emails reviewed by the Times, but says she wasn't given any assurances that things would change. She quit the organization over this incident, the Times reported.

The Times also reported that many female employees on the campaign were initially paid less than their male counterparts. Davis said that she had a salary of $2,600 a month when she discovered that a man who originally reported to her was being paid $5,000 a month. She said she was given a raise after bringing this up to the campaign's chief operating officer, and that she helped "at least a dozen women request raises so that they would be paid on par with their male peers."

Speaking generally about 2016, was it too male? Yes. Was it too white? Yes. Would this be a priority to remedy on any future campaign? Definitely, and we share deeply in the urgency to make the necessary changes. In 2016, as the size of our campaign exploded we made efforts to make it a positive experience for people. That there was a failure pains me very much.

Friends of Bernie Sanders told the Times that there were pay disparities on the campaign, but that salaries were "never determined based on any consideration of an individual’s gender or of any other personal characteristic.’’ In its statement released after the Times report was published, Friends of Bernie Sanders said, "We will continue to examine these policies and processes, and make any necessary changes, as we continue our work to build a world based on social, racial and economic justice."