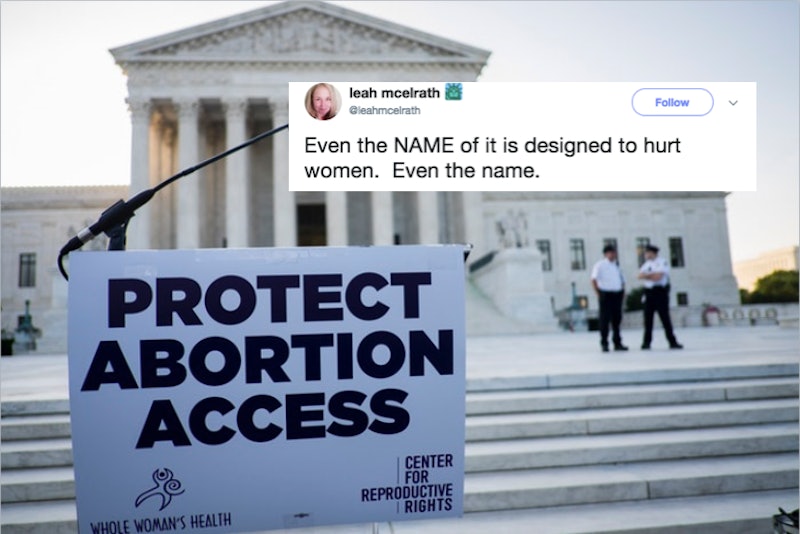 Earlier this week, while many were still busy celebrating the Republicans’ failure to repeal the Affordable Care Act, the House passed a 20-week abortion ban on Oct. 3, called the "Pain-Capable Unborn Child Protection Act." The bill would criminalize abortions and attempted abortions after 20 weeks of pregnancy, with the possibility of a fine, up to five years in prison, or both. Rare exceptions to the bill would include rape, incest, and the endangerment of the mother’s life, due to a medical condition — if a women sought an abortion for any of these reasons, she would not be subjected to legal punishment. Similar legislation failed in both 2013 and 2015, but unlike past attempts, conservatives in the House now have the explicit support of the White House. Though the bill is projected to fail in the Senate, women who have had an abortion after 20 weeks are mad as hell about it, and are coming out against H.R. 36 on Twitter.

This bill and accompanying support from the Trump administration shouldn’t come as a surprise. Since the election, Trump has spouted anti-abortion rhetoric, has appointed anti-abortion activists in various positions, and expanded the “Global Gag Rule,” a law that bans U.S. foreign aid from being used for anything abortion-related. And unfortunately, Trump’s anti-abortion stance has probably been emboldened by Vice President Mike Pence, who is extremely pro-life (To me, Pence is Handmaid’s Tale level scary). So how do we support women seeking abortion or who had abortions in the age of Trump and Pence?

Pro-choice advocates and women’s health organizations such as Planned Parenthood have constantly been on the defensive, fighting to protect bodily autonomy. Dr. Raegan McDonald-Mosley, Planned Parenthood’s Chief Medical Officer, tweeted, “This unconstitutional bill criminalizes doctors, and punishes women by restricting access to safe and life-saving medical care,” adding “All people should have access to the healthcare, and medical treatment they need. Politics shouldn't get in the way.”

Many women who've undergone a second or third trimester abortion shared Dr. McDonald-Mosley's sentiments. “I don't care what anybody thinks. I had an abortion. I would have died without it. This law will kill people,” says Twitter user Molly Holmes. The ban, which is based on fake science that suggest fetuses feel pain at 20 weeks, a theory that has been roundly debunked, caused collective outrage among women who feel this is a punishment. Twitter user Leah McElrath says, “This whole ‘Pain-Capable Unborn Child Protection Act’ that just passed in the House is infuriating and sadistic. Even the name of it is designed to hurt women. Women do not get abortions at 20 weeks because they have other good options.”

In addition to the rightful anger, many women responded to the proposed ban by sharing some the their most vulnerable truths, and abortion experiences. One woman on Twitter shared her heartbreaking story, saying, "I had an abortion. It was safe, legal, and moral for me. I was 25 weeks when I found out I was carrying a product of incest rape.” She adds:

As a 13 year old, I did not want to or need to birth a fetus. My life was saved from the religious cult sexual abuse my birth parents forced me into. Because I needed a dignity saving abortion, I am free. Do not let congress deny women the right to be free from incest, sexual abuse, rape, etc. I had an abortion and it saved my life…[Many] girls and women don't even know they are pregnant at 25 weeks.

Though the bill would technically protect a woman's right to an abortion in this user's case, the GOP's anti-abortion rhetoric is shaming, and may stop a woman from seeking medical attention for their reproductive health needs. Not to mention, women who are seeking to terminate after sexual assault still must endure mandatory counseling and waiting periods in most states.

Another woman tweeted, “At 21 weeks I found out the fetus I was [carrying's] brain was developing outside the skull, the chest cavity was not closing.” Guinn adds “My husband and I so wanted a baby, it was not to be. I had an abortion. Being made to carry to term would have been daily anguish.” And she is not alone. Only 1.3 percent of abortions are performed after 20 weeks, and studies have found these women typically face socioeconomic disadvantages or, there is medical condition that almost forces a woman to terminate. “I had a molar pregnancy with a heart beat still detected. I was literally at risk of getting cancer. [I] had to have an abortion,” says one woman on Twitter, “Two days after the abortion, I had to have surgery to remove a mass that put me at a cancer risk.”

Though most women who receive a second or third trimester abortion do so because it either medically necessary, or because the procedure is wasn’t accessible before, there should be no requirement to receive your basic autonomy. A Twitter user with the handle @kaydeelex shared her painful experience of terminating at ten weeks after being sexually assaulted in a series of tweets, but also expressed her outrage towards the 20-week ban:

“[My abortion] was not an easy decision. So, I cannot imagine the pain of expecting to give birth and finding out there is something severe enough to warrant late term abortion. It is cruelty to force a pregnant person to endure more agony. F*ck the GOP for this bill. If they cared about preventing abortion, they'd support birth control access and comprehensive sex education.”

Many women who’ve terminated a pregnancy have found solace in online forums, or Instagram accounts like Pro-Choice, who regularly share anonymous abortion stories with their 45,000+ followers. The moderator of Pro-Choice, who uses the alias Vesta, tells Bustle via email, “I already receive questions about how to perform a DIY abortion, and with a 20-week abortion ban, I’m worried [these requests] will only increase. It breaks my heart to see pregnant people forced into a corner with no other choice, but I have never ever encouraged DIY abortions.” Vesta also adds she is terrified the 20-week abortion ban will cause people seeking abortions to “once again turn to dangerous methods and hurt themselves, creating a horrifying black market of abortions that could simply be avoided by safe and legal access.”

Meredith Isaksen, who shared her second trimester abortion experience in The New York Times last year, summed up the abortion debate well: “I can say without a shadow of a doubt that we made the right decision for our family …our government has absolutely no place in the anguish which accompanies a late-term abortion, except to ensure that women and their families have the right to make their choice safely and privately.” Courageous women have shared their abortion stories time and time again, yet politicians (mostly men) still insist on stripping women of their most basic rights. Frankly, this bill is oppressive, and women seeking abortions deserve better, more compassionate healthcare — before and after 20 weeks.