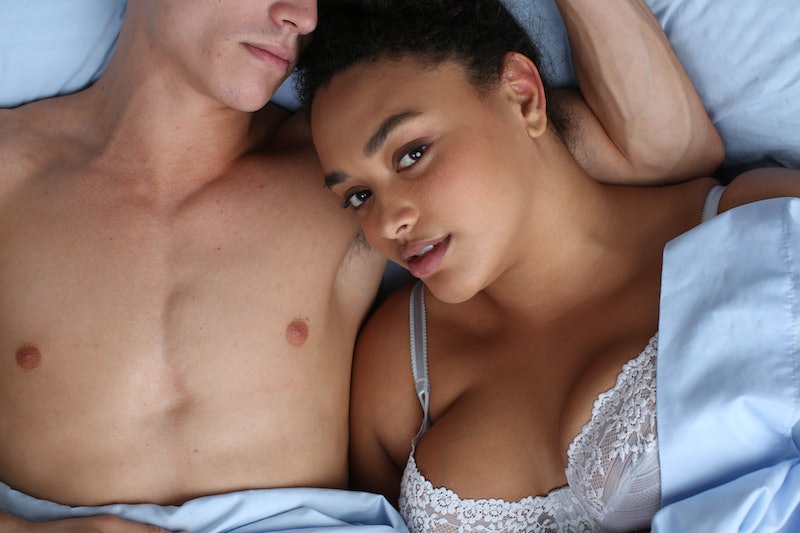 When you talk about having safe sex, it can be easy to forget that there are actually two distinct aspects of safe sex that you're talking about. There's protection from STIs and there's protection from pregnancy. Condoms are the only form of protection that really protect you against both — and it turns out, we're not using them as much as we should be.

New data from Lifestyles, the condom brand, found that, despite the fact that rates of chlamydia, gonorrhea, and syphilis are increasing for the third consecutive year, far too many of us are still not prioritizing our sexual health. They looked at the 2016 CDC Sexually Transmitted Disease Surveillance Report and Emergency Contraception IRI Data Sales Tracking for the last year and the results were worrying. Cases of STIs in the U.S. have reached an all-time high — and half of new STIs are acquired by those between the ages of 15 and 24, so it's crucial that young people start to take protect themselves. For many of us, that means re-education — because our schools most likely let us down in the sex ed department.

"Our sexuality education in the United States is generally terrible," Rena McDaniel, clinical sexologist at Lifestyles, tells Bustle. "Not all states require sexuality education to be medically accurate and even fewer states or schools provide comprehensive sexuality education. Many people simply do not have the knowledge they need to make informed decisions about their sexual safety."

When I got a copper coil IUD, I felt like I was making a responsible choice — that I was being a grownup and tackling the unwanted side effects of unprotected sex. It felt like an accomplishment, like I had checked off that box. Except, I hadn't. I had protected myself against one side effect of unprotected sex. But that's not all there is to it — I had to keep making the responsible choice to protect myself against STIs.

"The important thing to understand about an IUD is that an IUD only protects uterus owners from pregnancy, not STIs," McDaniel says. "In a committed, monogamous relationship, the risk of transmitting or receiving an STI is low. However, if you are unsure of your partner's STI status, it is extremely important to also use a condom." And make sure that you and your partner communicate about your sexual health, even early on in a relationship.

It's so important to protect yourself. While there's no shame in having an STI — they are incredibly common and largely treatable or curable — there are some serious side effects that can manifest if certain STIs are left untreated. Infertility, chronic pain, ectopic pregnancies, even seizures can all result from untreated STIs. So even if you have an IUD, it's important to protect yourself if you're not in a monogamous relationship and haven't discussed testing.

Remember, many STIs can be asymptomatic, so it's up to you to get tested regularly — even if you don't think you're at risk. The truth is, people sometimes find out they have an STI when they thought they were in a monogamous relationship where they didn't need protection. Try to be realistic, even if it can feel cynical.

Sexual education in the U.S. is simply not good enough — there's a reason young people are contracting STIs so frequently. So, take some steps to protect yourself. Just because you have an implant or IUD, doesn't mean you're fully protected. Condoms are always a safe bet.