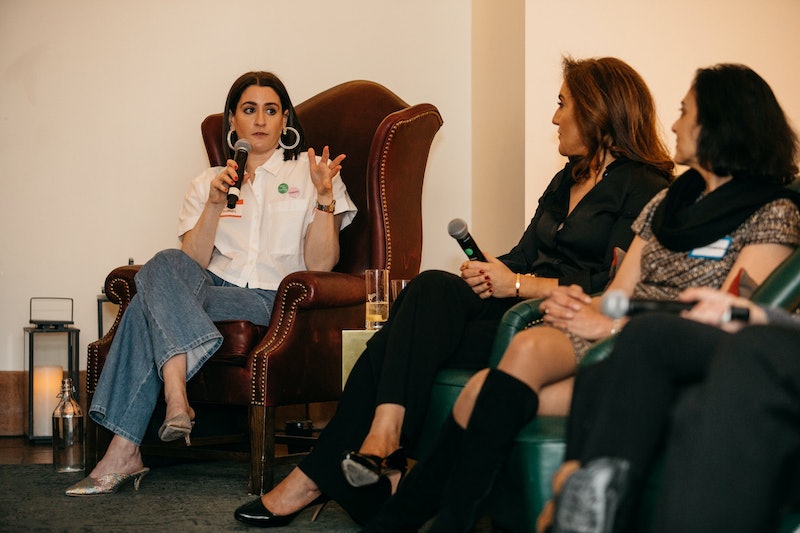 When Meredith Fineman started Women Write Washington, she was frustrated with the stereotype that Washington D.C. is a "boring" city filled with "old white dudes." She wanted to host fun events and showcase books that addressed just about anything other than politics. Now, Women Write Washington strives to celebrate and uplift women's voices on topics ranging from career and entrepreneurship to beauty and fashion, and most recently, destigmatizing women talking about money.

"[Money] is a really key hot button issue and one that we don't get to talk about as much in D.C." Fineman tells Bustle. "I don't think that women talk about money. It's so greatly increased in the past couple of years, but that is, I feel like, predominantly in places like New York. And so I feel like women in Washington are really starved for content that is relevant in other places."

Fineman had to cut off attendance for Women Write Washington's most recent panel, "Women and Money, Honey" — which was a partnership with Bustle and LINE, and sponsored by Troutman and Glamsquad — due to overwhelming eagerness to attend, and she's already thinking of a second event focused on women and money. Women and Money, Honey, featured the book I've Still Got Me: A Widow's Journey to Love, Happiness, and Financial Independence, by Michelle P. Cooper. In her book, Cooper shares her story of regaining control of her finances after a tragedy in her family.

The panel included Cooper; Sadvhi Subramanian, SVP of Capital One; Amanda Steinberg, Interim CFO of Revolution Messaging and founder of Daily Worth; Jada Gomez, Executive Editor of Bustle; and Kisha Salters, VP Global Technologies and Solutions at the Carlyle Group. Panelists discussed their spending regrets, as well as their tips and tricks for financial wellness. Although panelists' money rules sometimes differed culturally, one thing everyone could agree on is that women simply aren't talking about money enough.

"Everybody's ashamed," Fineman says. "It's taboo. We don't talk about how much we're making. I think that women don't get to say things like they want to be rich, it's not as accepted... [the solution] is a matter of getting comfortable and having friends that you can talk to about money, and understanding that it's an important thing, and there are varying degrees of shame associated with the money conversation period. It's a scary, difficult thing and something we all worry about every day."

This worry and shame can make it difficult, especially for women, to talk openly about their finances.

"Money is so personal and so emotional," Fineman says. "It feels intensely private and intensely personal, and part of that needs to change. It's so essential for women to be making more money. I would say that we have to start talking about it so that we can help each other figure out what we deserve to be paid, figure out how much we want to make, and make smart choices around it."

Incorporating Washington D.C.'s diversity is a mission of hers — and it's been essential while founding Women Write Washington and FinePoint, a communication and leadership development company that focuses on women's visibility by teaching women how to brag.

"I care that the audiences [at my events] reflect what the world looks like in terms of diversity," Fineman says. "I make sure that my panels aren't just overtly white women, and it's just not white feminism 101."

Fineman also strives to support female entrepreneurs in various industries. She even invited a local girl scout, the "tiniest lady entrepreneur," to sell cookies at "Women and Money, Honey".

Fineman says that people love Women Write Washington events because they are open discussions. But the discussions can be challenging, too. At "Women and Money, Honey," things got particularly tense when a man said he didn't believe women actually make less money than men even though studies show that women earn an average of almost 78 cents on the dollar and Black women earn roughly 67 cents and Hispanic women earn 58 cents.

"I think [financial equality] is really one of the final frontiers of equality or one of the most important ones," Fineman says. "He really learned something, but I think it was all just a tremendous gut check for all of us who are really liberal, really educated, [and think] 'of course everyone knows that this is an issue.' I think these topics desperately need to be heard by men, particularly this one."

While trying to mitigate the situation, Fineman realized that while many women happily sit around discussing the inequality that affects them, too many men don't.

"I don't think men get together and have these conversations, have these sorts of powwows about important issues, and I think after this event it's very clear to me how much more Women Write Washington needs to be about involving men in D.C. too, to help them understand," Fineman says. "It was a wake up call that I need to make sure there are a lot of men in attendance as well."

More like this
An Open Letter To The Person Who Bought Steve Jobs’ Birkenstocks For $218,000
By Ginny Hogan
8 Money Saving Experts To Follow For Accessible Advice
By Maxine Harrison
Is Blake Lively Or Penn Badgley The Richest 'Gossip Girl' Star From The OG Series?
By Hugh McIntyre
Silvio Scaglia Is Wealthier Than 'My Unorthodox Life' Star Julia Haart
By Radhika Menon
Get Even More From Bustle — Sign Up For The Newsletter