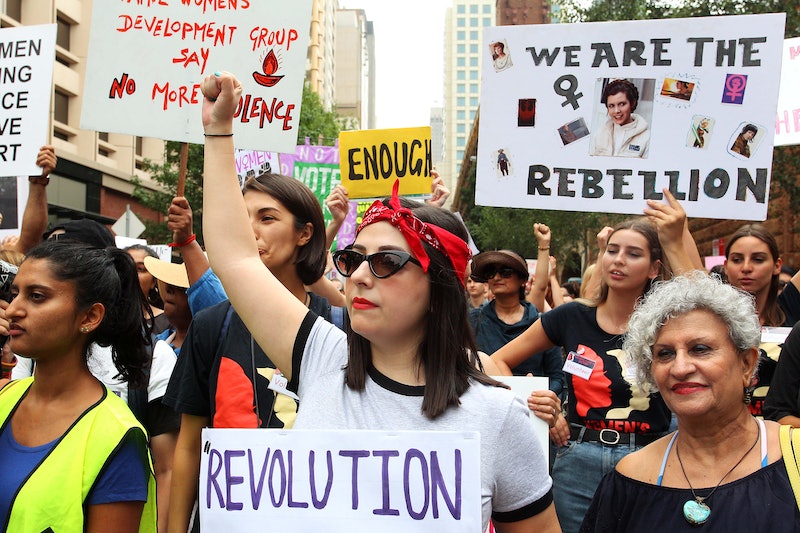 The days and weeks leading up to the 2019 Women's March were filled with controversy, as the march's national co-founders faced allegations of anti-Semitism and the march itself was criticized for disproportionately catering to white women. Despite these concerns, however, The Washington Post reported that Women's March 2019 attendance numbers were higher than expected.

According to the Post, anywhere from 665,324 to 735,978 people participated in the Women's March — either in Washington, D.C. or in over 300 other locations across the country. Roughly 100,000 people attended the march in D.C., per the Associated Press, while Los Angeles hosted the largest march with an estimated 200,000 participants. There were also between 5,000 and 10,000 participants in Women's March events outside the U.S., according to data collected by the Crowd Counting Consortium.

As the AP pointed out, this year's Women's March was scaled down compared to previous years; in 2017, the first year the march took place, nearly 500,000 people marched in D.C. alone. According to The Washington Post, however, the number of participants in this year's marches exceeded expectations because there were roughly half the number of sister marches as there were in 2017, and 20 percent fewer locations than last year.

The Post also reported that this year's Women's March — despite lower attendance than past years — still ranked number seven in a list of the 10 largest days of protest since Donald Trump assumed the presidency. Other marches on the list include the anti-gun violence March for our Lives and the Women's Marches of the past two years.

The Associated Press reported that multiple factors contributed to the lower turnout at this year's Women's March. The march was scheduled to take place during the partial government shutdown, at a time when freezing rain and snow were expected — and due to the shutdown, the National Park Service was no longer plowing snow. As a result, organizers changed the location of the march.

Then, national march organizers faced allegations of anti-Semitism, stemming in part from their reported ties to Nation of Islam leader Louis Farrakhan, and received numerous demands to step down. The organizers all denied these allegations, and released a statement denouncing anti-Semitism.

Nevertheless, hundreds of thousands of protesters still took to the streets across the country to protest the Trump administration's repressive policies, to show solidarity with the #MeToo movement, and to condemn the confirmation of Supreme Court Justice Brett Kavanaugh. Kavanaugh faced multiple allegations of sexual misconduct during his confirmation hearings, all of which he denied.

According to The Washington Post, social movements can expect to see a decline in numbers as they take place year after year, often due to protest fatigue. A decline in the attendance at the 2019 Women's March compared to the past two years consequently should not be surprising; the fact that more than 500,000 people turned out for the march's third iteration, however, was not as predictable.

This year's Women's March also seemed to celebrate the 2018 midterm elections, in which a record number of women and people of color were elected to office at all levels of government. Two years after its inception, the Women's March is still working to build a more intersectional platform by tackling issues like immigration, gun control, voting rights, and racial justice.