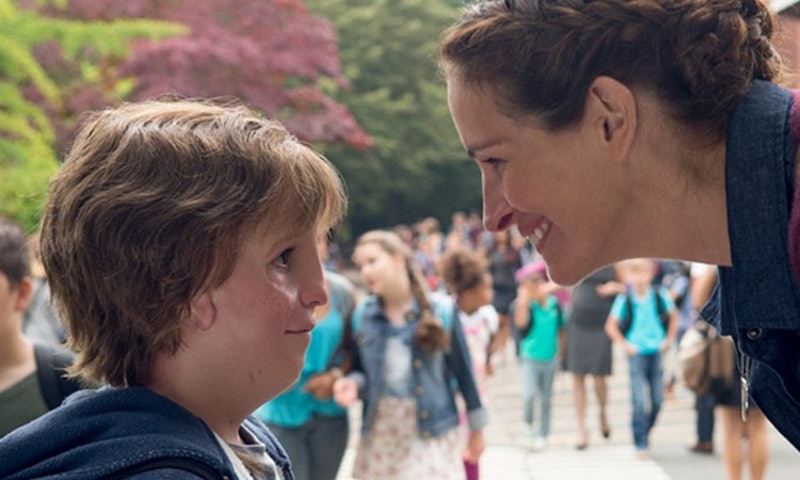 When the 2018 Oscar nominations were announced on Tuesday, I was appalled to see that Wonder had been nominated for Best Makeup & Hairstyling. Despite the movie's generally high ratings and praise from critics, the film crew failed one of the most important parts of telling the story of Wonder, a movie about a 10-year-old with a genetic craniofacial condition — and that's hiring a disabled actor to play Auggie. As such,Wonder's nomination is extremely offensive to people with disabilities, and especially to people with craniofacial conditions.

In the film, actor Jacob Tremblay plays the main character of Auggie, a boy with Treacher Collins syndrome. The movie, based on a New York Times bestselling book with the same name by R.J. Palacio, follows his experiences of attending fifth grade after being homeschooled all his life. For the book, Palacio said she interviewed children with craniofacial conditions to better understand their everyday experiences, and she was also an executive producer for the movie. But that's not enough; the film should've featured an actor with a disability in the leading role.

In media interviews, Wonder makeup designer Arjen Tuiten said he relied on prosthetics and heavy makeup to help Tremblay resemble a boy with Treacher Collins syndrome. The entire process of transforming Tremblay into Auggie took 90 minutes every day, which Tremblay called a "pretty uncomfortable" experience, according to People. At one point, Tuiten notes that he developed contact lenses to enlarge Tremblay's eyes and "made him cuter."

And herein lies the problem: People with craniofacial conditions don't get to choose their appearance. Disability isn't a costume or a mask you can put on for a few weeks and win an award for. It's an identity that 19 percent of the population identify with, including myself. But Hollywood has yet to recognize this. People with disabilities continue to be greatly underrepresented in the entertainment industry, both as actors and as characters. As Ariel Henley, a writer with a craniofacial condition called Crouzon syndrome, puts it, "To suggest that people with craniofacial disorders, who so desperately want to see themselves reflected in mainstream media, should be grateful for this movie, while ignoring all the ways in which this story and the casting is problematic, only perpetuates our marginalization."

Every so often, people with disabilities are given minor roles in films, though the roles themselves are often ableist and further perpetuate disability stigma or inconsequential in the movies. By and large, and for far too long, white non-disabled male actors have consistently gotten the parts of disabled main characters: Back in the 1990s, Jim Carrey and Jeff Daniels starred as characters with developmental disabilities in the comedy classic Dumb and Dumber. In 2014, Eddie Redmayne portrayed Stephen Hawking in The Theory of Everything. Most recently, in October, Andrew Garfield played a disabled activist with polio who wears a tracheostomy tube (the same respirator that I wear) in the biographical drama Breathe. The list goes on.

If Wonder wins this Oscar, it will justify the egregious lack of disability representation in Hollywood. It will also send the message that it's OK to imitate disabled characters instead of actually hiring disabled actors to tell their own stories. As a society, we've established that blackface, whitewashing, and cultural appropriation are big no-nos, but that disability simulations are OK. When will we stop treating disability as an afterthought, and start challenging disability movie tropes and tired narratives that do nothing to serve the communities they are about?

Some may argue that there aren't nearly enough disabled actors out there to audition for movies about disability, and even fewer child actors with craniofacial conditions who would fit the role of Auggie. But considering the fact that nearly one in five people have a disability, it's worth examining the considerable barriers disabled actors struggle with in order to receive the necessary training and support to become professional actors in the first place, much less land roles.

Rampant ableism and unequal access to opportunities in virtually all creative industries could also discourage people with disabilities from pursuing acting as a career. In fact, the Ruderman Family Foundation found in 2016 that the majority of disabled actors in the television industry worked less than once a year and often experienced stigma and ableism at the hands of casting agents and producers.

In November, Allison Klein of The Washington Post interviewed several kids with craniofacial conditions about their thoughts on Wonder. According to these kids, the movie "is not entirely relatable" — not all young people with craniofacial conditions and other disabilities feel ashamed the way Auggie does, for instance. (This is a common disability trope.) Another important takeaway is that the kids liked the movie, but they felt "the message of the film is not for them...it’s for everybody else." And this is the case for a lot of movies, books, television shows, and other creative projects that highlight disability: They're made by mainly non-disabled creators, and they're designed with a non-disabled audience in mind, not people with disabilities.

The producers of Wonder, David Hoberman and Todd Lieberman, said in a statement that they did consider hiring a child actor with a craniofacial condition to play Auggie, but that they ultimately went with Tremblay because of his skill. (And Tremblay is, to his credit, an incredibly talented actor for his age.) To pose a very real question here, however, to what extent should we be willing to forego diversity, authenticity, and accurate representation in storytelling for the sake of Hollywood talent?

Is it good that movies like Wonder are bringing more awareness to craniofacial conditions like Treacher Collins Syndrome? Yes. Have we made some progress in centering more narratives on disabilities than in the past? Sure. Can we honestly say that our job is done here? No. Far from it. If Wonder receives an Oscar for using makeup on a non-disabled actor, then it creates a dangerous path for future movies to do the same. Disability is still rare enough in Hollywood that any portrayal of disability we get sets a precedent. Except instead of moving forward in improving the careers and lives of people with disabilities, we will unfortunately be taking a step back.

More like this
Emma Corrin Spoke Out Against “Clickbait” Headlines Surrounding Gender Conversations
By El Hunt
This James Bond Event At Abbey Road Studios Was A 007 Fan's Dream
By Samantha Rollins
These ‘Love Actually’ Plotlines Are “Out Of Date,” According To Director Richard Curtis
By Grace Wehniainen
This Iconic ‘Love Actually’ Scene Drove Alan Rickman “Insane”
By Grace Wehniainen
Get Even More From Bustle — Sign Up For The Newsletter