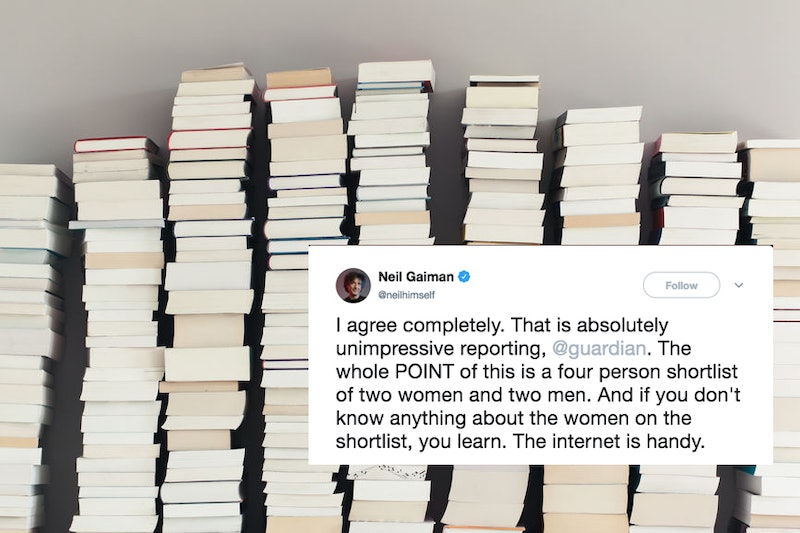 The Nobel Prize in Literature won't be awarded to any author this year, but an alternative prize has popped up in the literary world with a shortlist of authors — Maryse Condé, Neil Gaiman, Haruki Murakami, and Kim Thúy — in contention. But now, people are calling out The Guardian's coverage of the alternative Nobel Prize that centered the male authors as primary contenders, while Condé and Thúy were described as "complet[ing]" the shortlist. The article has received pushback from many women writers, including Fern Riddell (The Victorian Guide to Sex) and Susan Elia MacNeal (The Prisoner in the Castle), and even prompted Gaiman himself to respond.

After a sexual harassment scandal destabilized the Swedish Academy, it declined to present an author with the Nobel Prize in Literature in 2018. The New Academy, an assemblage of people from the Swedish literary scene, announced that it would present an alternative to the famed prize for this year only. Condé, Gaiman, Murakami, and Thúy beat out 43 other authors for a spot on the New Academy Prize shortlist, but coverage from the UK newspaper focused on Gaiman and Murakami, with the headline "Neil Gaiman and Haruki Murakami up for Alternative Nobel Literature Prize."

Women weren't letting The Guardian slide. As Riddell pointed out, "There's a shortlist of FOUR WRITERS and TWO are WOMEN, but [The Guardian] doesn't seem to care about that." Chiming in, Cambridge researcher Anna P. Judson asked, "Why do the two women on the shortlist not get a mention until para 7, and then only as 'completing the shortlist' which the two men are apparently headlining?!" Judson brought it to Gaiman's attention, and the Neverwhere author had his own comment to add.

"I agree completely," Gaiman tweeted. "That is absolutely unimpressive reporting, [The Guardian]. The whole POINT of this is a four person shortlist of two women and two men. And if you don't know anything about the women on the shortlist, you learn. The internet is handy." Gaiman went on to praise reporting from Germany's DW News, calling its take — "Four Writers Shortlisted for 'New Nobel Prize'" — "a proper headline."

For those who aren't familiar with Maryse Condé's and Kim Thúy's work, here's a brief primer. Guadeloupean author Condé is Professor Emerita of French at Columbia University, and has written a number of plays and novels, including the historical fiction I, Tituba: Black Witch of Salem and Segu. In 2008, she published Windward Heights, a reworking of Wuthering Heights, set in Guadeloupe. She is the recipient of the 1986 Le Grand Prix Litteraire de la Femme and the 1988 Le Prix de L’Académie Francaise, which are awarded to outstanding French-language novels.

Also publishing in French, Thúy is a Vietnamese-born author who immigrated to Canada with her family in 1979. In 2010, her first novel, Ru, won the Governor General's Award for French-Language Fiction. She has since published two additional novels, Mãn and Vi. All three of Thúy's books have been translated into English.

The controversy comes on the heels of the revelation that male authors are four times more likely to read and recommend male-authored works over books by women. That analysis came from UC Berkeley Assistant Professor David Bamman, who examined the 100 most recent "By the Book" columns in The New York Times. Bamman found that, of the books recommended by male authors interviewed for "By the Book," only 20 percent were written by women, while women writers named male and female authors at equal rates.

The New Academy will announce the winner of its alternative Nobel Prize on Oct. 12.