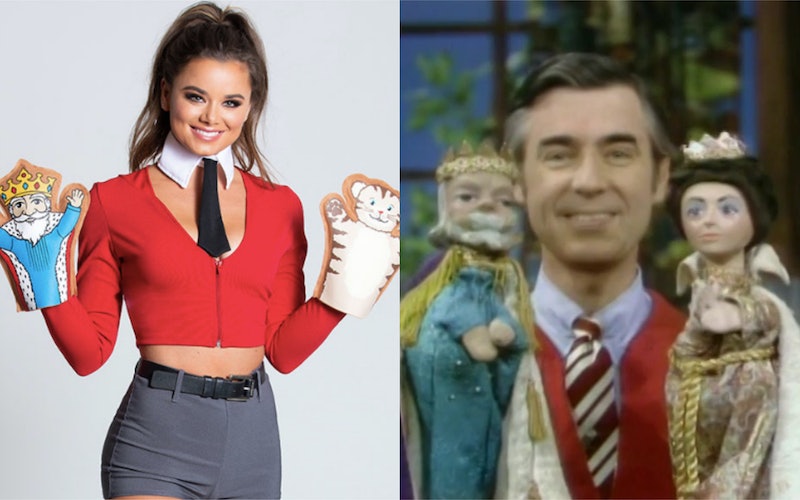 It is, indeed, a beautiful day in the neighborhood. Fall is barely at our doorsteps and already we have a sexy Mister Rogers Halloween costume. Is it a blessing? Is it a curse? Is it weird if I thought the classic sweater-and-slacks combo was already kinda sexy?

You can thank and/or blame online retailer Yandy for what is sure to be one of the most talked-about costumes this Halloween. Dubbed the “Nicest Neighbor Costume”—obviously this was not a costume approved by the Fred Rogers’ estate, thus they can’t actually use Mister Rogers’ name—the costume comes complete with the iconic red sweater set, white collar, black necktie, gray pants, and black belt. However, the sweater is cropped with a deep V neckline, the collar is detachable, and the gray pants are booty shorts. The absurdity of it all is, if nothing else, admittedly impressive.

Some are calling the costume “gross” or childhood-ruining. Others have deemed it “ridiculous as well as disrespectful.” While others still are like, “Wait ... was Mister Rogers ... hot?”

For $59.95, you too can look hot and sexy just like the beloved children’s television show host. “Won't you be my neighbor?” Yandy’s product description reads. “Entice your friends next door with your playful puppets!” Entice, indeed.

If you want to go absolutely buck wild with your hot Mister Rogers costume, you can get hand puppets designed to look like the Mister Rogers’ Neighborhood characters Daniel Tiger and King Friday. That $12.95 price tag also includes a gray painted vinyl wig a la Mr. Rogers’ iconic coiffure. The wig isn't realistic but at least it's wildly unsettling.

If this whole thing is making you uncomfortable, that’s kind of the point. Yandy’s Halloween costume history reads like a sexy who’s who of trendy Halloween costumes. There’s the Sexy Poop Emoji. Sexy Slenderman. Sexy Hugh Jackman in The Greatest Showman. Last year, they even introduced a Sexy Op-Ed Anonymous costume as an homage to the White House insider who anonymously published an opinion piece in the New York Times.

This year, Yandy has costumes for Sexy Cauliflower Pizza, Sexy “Beyond Meat” Burger, and, my personal favorite, a Sexy Tariff. There is something pleasantly stupid about a costume inspired by the Trump Administration's ongoing tariff debacle...but made sexy. How do the people at Yandy do it? Do they skim the trending Twitter news and see which headlines work when you add "sexy" to the title? Do they throw a dart marked "booty shorts" at the Sunday Edition of the Times? Perhaps it's best not to know how the sexy sausage is made.

Yandy is more than familiar with scandal, as you might expect from a retailer currently selling a bootleg Sleeping Beauty costume called “Naughty Napping Princess.” Last year, Yandy made news after introducing and then subsequently pulling its Sexy Handmaid’s Tale costume. With the costume paying homage to a show about women sold into sexual slavery, some saw the “Brave Red Maiden” costume as crossing a line. “Over the last few hours, it has become obvious that [the costume] is being seen as a symbol of women’s oppression, rather than empowerment,” Yandy wrote in a statement posted to Twitter. “This is unfortunate as it was not our intention on any level. Our initial inspiration to create the piece was through witnessing its use in recent months as a powerful protest image. Given the sincere, heartfelt response, supported by numerous personal stories we’ve received, we are removing the costume from our site.”

Others have criticized the retailer’s choice to continue selling costumes that objectify and stereotype Native Americans and other racial and ethnic groups, despite choosing to pull the Handmaid’s Tale costume so quickly. Speaking of which, here’s your yearly reminder to please, for the love of god, don’t wear a racist Halloween costume.

As for whether or not you should dress up as a sexy Mister Rogers, that’s entirely your call, neighbor.