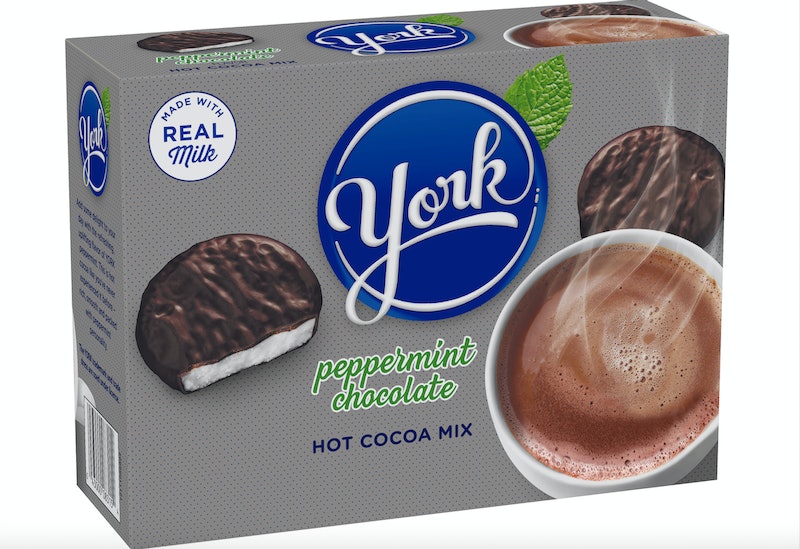 We’re still deep in the throes of pumpkin spice season, so to be perfectly honest, I have not lately spared a thought for what comes next — but that’s all changing, now that I am aware of the fact that York Peppermint Patty hot chocolate mix exists. Officially, it is called Hershey's York Peppermint Chocolate hot cocoa mix, but that’s a minor quibble; I will most likely continue to refer to it as York Peppermint Patty hot chocolate, because I can think of few things as delightful as a mug full of something that literally tastes like a pile of melted peppermint patties. Many thanks to Delish for bringing this one to my attention; it’s absolutely worth a moment of your time, even if you’re already planning on getting yourself another Pumpkin Spice Latte later today. Or even if you’re currently in line to get yourself another Pumpkin Spice Latte right this very minute.

Although the treat is new to me as of today, this isn’t actually the first time we’ve seen York Peppermint Chocolate hot cocoa mix on shelves; according to Snackgator, Hershey’s quietly dropped several varieties of candy bar-inspired hot chocolate mixes back in 2018, including the York option. A straight-up Hershey bar hot chocolate mix also debuted at the same time, but, I mean… sure, Hershey bars are great, but have you tried the magical combination of creamy, cool, peppermint filling surrounded by rich dark chocolate that is a York Peppermint Patty? Because that flavor combo wins every time in my book.

What’s more, the hot cocoa apparently does taste like a drinkable York Peppermint Patty. According to Snackgator’s 2018 review of the hot cocoa mix, the stuff is excellent: The “minty sensation” hits first, “followed by the dark chocolate flavor,” yielding a flavor profile that’s “not too minty [and] not too chocolatey.” It strikes the “perfect balance,” according to the review, and “replicates the York Peppermint Patty so well.” Consider me sold.

As for where you can get yourself a box of this delightful treat? Long story short: You’ve got options. As Delish pointed out, food Instagrammer SnackStalker recently spotted the hot cocoa mix at a brick-and-mortar Walmart location; there are also listings for it on Walmart’s website. However, it’s also available at a number of other retailers, including Amazon and Hy-Vee (via Instacart). Heck, you can even find it on eBay — all of which is to say that you don’t have to go to just one store to find the stuff. Just know that the price will probably vary based on the source; it seems range between around $3 and $13, depending on where you go.

The price also varies based on whether you opt for your standard six-count box of packets full of just-add-water mix, or whether you spring for the 10-count box of K-Cups. You heard me: If stirring your hot cocoa — with an actual spoon — seems too labor-intensive for you, you can just pop a K-Cup into your Keurig machine and have yourself a very merry cup of peppermint-chocolate goodness in just a few seconds. Personally, I am not a K-Cup kind of human; I do not, and almost certainly will not any time in the future, own a Keurig or other pod-based drink machine. I will therefore be sticking with a good-old fashioned envelope of dehydrated cocoa—but I suppose it’s nice to have options, if Keurigs are your jam.

In any event, you can nab some York Peppermint Chocolate hot cocoa mix for yourself on Walmart, Amazon, and Instacart, among others. Don’t forget to add the marshmallows!