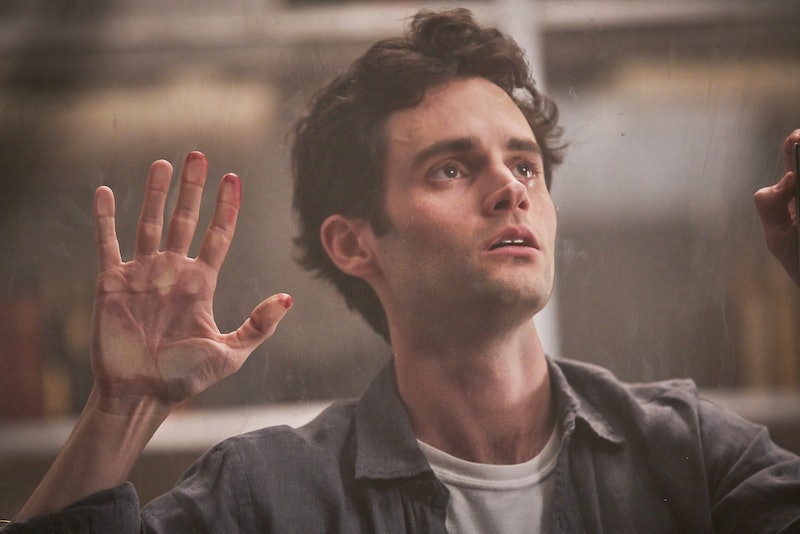 Spoilers ahead for YOU Season 1. One of the most psychologically addicting, binge-worthy shows to ever grace a Netflix queue is undoubtedly YOU, which is getting a second season on the streaming platform. But what many avid viewers may not know is that YOU almost didn't get a Season 2, a thought even more chilling than some of the things Penn Badgley's Joe does in a given episode. What this also means is there's an alternate universe when Season 1's cliffhanger, revealing that Joe's presumed dead ex-girlfriend Candace is actually still alive — never gets resolved. Fans are depending on a Season 2 to give major context to Joe's backstory and what contributed to his current stalking and murdering ways.

But as it turns out YOU had as twisty of a journey to the screen as bingers do while watching. Co-creator Greg Berlanti revealed at an INTV conference panel Tuesday that the series cycled through several homes before finding a permanent place with Netflix. This news comes as a surprise not only because of the fan fervor that surroundedYOU once it hit Netflix in December, but because the show was actually renewed for a second season at Lifetime in July before it had even premiered. But just as the show unfolds unexpectedly onscreen, YOU had its own offscreen challenges.

Before the show even premiered in September 2018, it was reported that YOU had been renewed for a Season 2 at Lifetime. But after Season 1 didn't seem to captivate audiences rating-wise on the network, Berlanti said a return was no longer likely. "[Lifetime] wanted to make it, and we shot it, and because of their launch cycle it sat in the can for a while for two-and-a-half years," Berlanti said, according to Variety. "Then they finally started to release it, and it didn’t do very well."

That's right, not only was a YOU Season 2 almost cancelled, but Season 1 sat with Lifetime for over two years! (We're not sure that's the hiatus the creators were hoping for.) To make the road to filming even thornier, Berlanti revealed that the show was originally pitched and sold to Showtime, before the cable network allowed the team to take it elsewhere. Once Berlanti found that Lifetime might back-pedal on its Season 2 promise, the YOU creator said in the interview that he found himself pleading for the show's comeback.

Apparently, the problem with YOU wasn't its message (or problematically sought-after lead delivering it), but the medium. Once Netflix began streaming Season 1 of the show, fans caught on fast. Notoriously tight-lipped about viewership, Netflix had no problem touting that upwards of 40 million households had streamed YOU in its first month on the platform. Suddenly, a Season 2 was on the table again. Berlanti said he "started getting a flood of emails and texts from people – who knew me and knew the show had been on since the summer – and then I felt like people were really discovering the show,” according to Variety.

Discover they did and what was once a show last picked for kickball ala Brooklyn Nine-Nine or The Mindy Project followed those series' leads and found a second life elsewhere. A release date for YOU Season 2 hasn't been announced yet, but we're relieved there's one to anticipate in the first place.