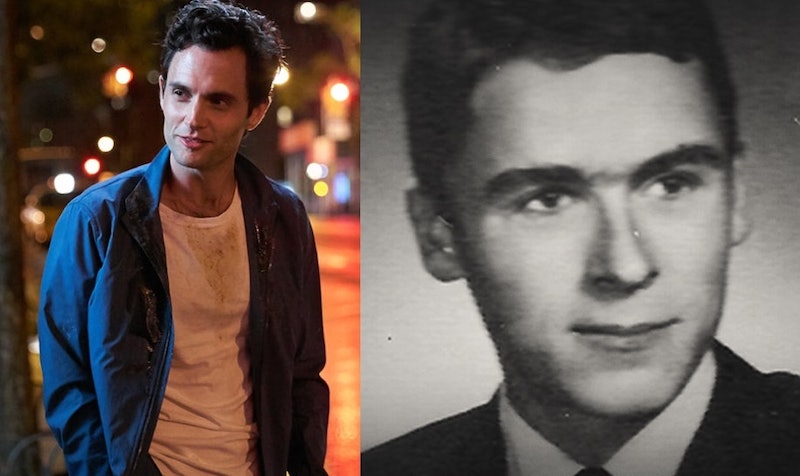 If you’re a sucker for crime flicks, you’ve probably already devoured two of the most talked about shows on Netflix as of late — YOU, which originally aired on Lifetime, and Conversations With A Killer: The Ted Bundy Tapes, a Netflix original. Of course, the gruesome plots of both these shows are part of the appeal for true crime lovers. But what is perhaps the most disturbing aspect of these trending crime shows doesn’t lie in the plot: It’s that they show the reality that abusers, more often than not, seem to be utterly normal.

If you're not familiar with the plots of the series (and yes, spoilers ahead), the fictional horror-drama show YOU follows the story of Joe Goldberg, who stalks, manipulates, and ultimately murders Beck, a graduate student and aspiring writer. And the four-part documentary series Conversations With A Killer: The Ted Bundy Tapes unveils never-before-heard audio of serial killer Ted Bundy from when he was awaiting the death penalty. Though one man is fictional and the other isn’t, both of their backstories share eerie similarities: They were well-liked in their communities, friendly, and led seemingly orthodox lives, which later obscured their horrific actions.

When someone comes across as "likeable," that's when "people put aside those alerts or warnings that they would take with them walking alone down a dark alley," Dr. Susan M. Blaustein, the founder and executive director of WomenStrong International, an organization that supports women-driven solutions to poverty, tells Bustle. "They [know] what kind of perpetrators to look for” in these unfamiliar spaces, but not among people they trust.

It used to be a common trope, in both entertainment and real life, that dangerous men were far removed from the reality of most people’s day to day lives. However, after the #MeToo Movement — the anti-sexual violence campaign created in 2006 by advocate Tarana Burke — was repopularized in the fall of 2017, people began to realize that abusers are rarely lurking down a dark alley — more often, they can be friends, relatives, people we trust, pillars of our communities.

People are more cognizant now of the truths that sexual and domestic violence survivors, as well as stalking survivors, have long understood: Abusive people often hide in plain sight, much like Joe from YOU or Bundy did. According to the Rape, Abuse and Incest National Network (RAINN), eight out of every 10 sexual assaults are committed by someone who knows the victim. Moreover, as a 2018 United Nations report revealed, women are more likely to be murdered by an intimate partner, family member, or someone they know than by someone they do not. Abusers are not just ominous figures, waiting to jump out of the shadows — they are likely to be people in positions of power, Dr. Blaustein explains.

“My abuser was the fun guy; everybody knows him. [He was] decently good looking and charming, and very manipulative," Hailey, a 24-year-old entrepreneur who says she was sexually assaulted by her former manager multiple times at the age of 22, tells Bustle. "Nobody believed me when I came forward, even with police reports and witnesses.”

Hailey’s experience was a common narrative heard over and over again amid the #MeToo movement. Despite research showing there are changing perceptions and attitudes toward gender-based violence, some people still buy into the myth that perpetrators are easy to pinpoint — that because they commit monstrous crimes, they must look or behave like monsters. Many people took to social media to express genuine shock over both the ending of YOU, when Joe murders Beck, and over the details of Bundy’s horrific acts revealed in Conversations With A Killer. Even more disturbing, some social media users romanticized Bundy and Joe, to the point that both Netflix and Penn Badgley, the actor who plays Joe, have pleaded watchers to stop commenting about these two men's attractiveness.

So, why does it seem that many people are still genuinely surprised when dangerous men appear otherwise friendly and conventionally attractive, where nothing seems out of the ordinary?

In an interview with Refinery29, the creator behind Conversations With A Killer, Joe Berlinger, offered up his own explanation to this question: “[Ted Bundy] taps into our most primal fear: That you don't know, and can't trust, the person sleeping next to you,” he said. “People want to think those who do evil are easily identifiable. Bundy tells us that those who do evil are those who often people we know and trust the most.”

“People are dug into these narratives, and have bought into them for so long,” says Dr. Blaustein.

Twitter users have pointed out how men like Bundy, and even fictional characters like Joe, were able to commit acts of violence against women that went unnoticed for so long because they benefited from white privilege. “Bundy was not special,” Ashley Alese Edwards, senior news and politics editor at Refinery29, wrote in a separate article on the docuseries. “What Bundy did have was the power of being a white man in a society that reveres them, and has implicit faith in their abilities. This privilege gave Bundy the ability to make even the most heinous of crimes take second place to his personality.”

Dr. Blaustein emphasizes the importance of realizing your abuser "may not look like a common caricature. It's the insidious ones that are really dangerous.” Whatever the reason, the main characters of Netflix’s recent crime shows have unnerved many viewers, who are left to interrogate what is the entertainment value of these objectively upsetting stories. Perpetrators don't "look" a certain way. Their public personas may never lead you to believe that they would commit acts of violence, and that's the scariest part of all.

More like this
David Tennant’s Transformation In ITV’s 'Litvinenko' Is Astonishing
By Sophie McEvoy
14 Easy Ways To Find Joy During The Holidays
By Carolyn Steber
6 Unexpected Causes Of Post-Workout Fatigue
By Carolyn Steber
I Visited Remedy Place, The Social Club Transforming The Wellness Industry
By Rachel Lapidos
Get Even More From Bustle — Sign Up For The Newsletter