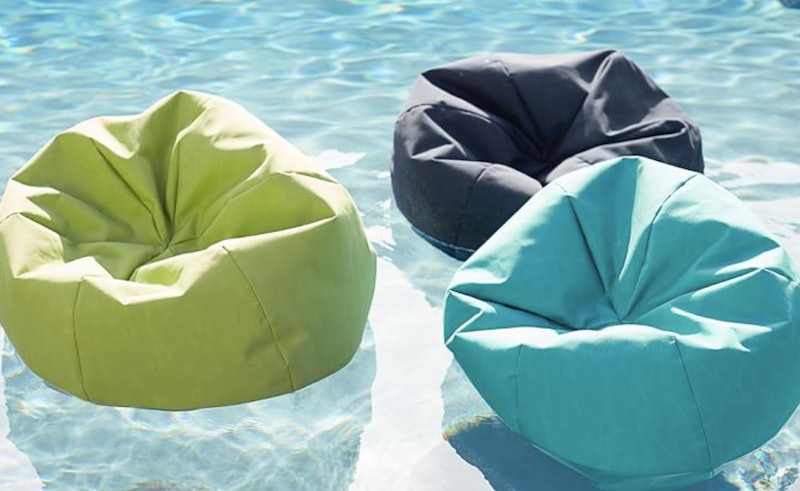 When it comes to pool floats, I thought I’d seen it all: Giant unicorn pool floats. Motorized pool floats. Pool floats for your dogs. I thought there wasn’t anything left in the world of pool floats that could surprise me — but then I learned that Pottery Barn has gifted us with the glory of bean bag chair pool floats, and, well… let’s just say that I have just rediscovered my love of ridiculous pool accessories anew. Oh, how my ‘80s baby heart sings for this most excellent of floating creations!

Technically, the thing isn’t called a bean bag chair pool float; it’s the Kai Seat Lounge. Part of Pottery Barn’s Kai pool collection, it’s a floating, fabric-covered pool lounger that looks exactly like the bean bag chair your best friend had in their basement rec room when you were a kid — minus the, uh, leaking polystyrene beads and duct tape-patched holes. This bean bag chair is sleek, chic, and made of fade-resistant, stain-resistant, mold-and-mildew-resistant, meant-for-water-use Sunbrella marine fabric. If you’ve ever wanted to drift across the water in a slightly ridiculous but phenomenally comfortable pile of fluff (or, uh... beads? Actually, it's not totally clear what's inside the lounge, but whatever), here’s your chance.

The very first successfully-marketed bean bag chair, known as the Sacco, was the result of a collaboration between three Italian designers — Piero Gatti, Cesare Paolini, and Franco Teodoro — and manufactured by Zanotta, the Italian furniture company previously founded by Aurelio Zanotta in 1954. What’s more, the chair was more than just a chair; it was an expression of — and a reaction to — the social climate of Italy at the time. When the Sacco entered production in 1968, Marta Zanotta, a niece of Aurelio and the brand’s current marketing and communication manager, said to the Robb Report in January 2019, “Italy was experiencing a full social revolution.” She continued, “As a result, people were desperate for something different, fresh air and lightness. The Sacco embodies the idea of living without constraints, in comfort.”

The general idea of the bean bag chair took off in the 1970s, undergoing a variety of changes as its popularity grew. Whereas the Sacco had been upholstered in 100% cotton, other materials, including canvas, corduroy, and vinyl, began forming the outside shell; it also morphed a bit in terms of shape, losing the rough back the Sacco had and becoming more like a giant version of your standard, run-of-the-mill circular bean bag. And although its popularity eventually began to decline in the ‘80s and ‘90s (replaced, no doubt, by the novelty of inflatable furniture), the bean bag chair still maintains a sort of mythic quality, with many of us who grew up during the decades at which the chair was at its height still secretly wishing we had one in our homes.

I do have to say, though, that a floating bean bag chair is a first (for me, at least). It’s not cheap — currently, it’ll set you back a cool $199 — but if you’ve got the disposable income on hand and a readily accessible pool, go ahead and live your best throwback life. Note, though, that although the product image on the Pottery Barn website shows a trio of floating bean bag chairs, each in a different color, it appears that right now, only one of those colors is actually available: The navy blue one. Alas, if you were hoping to grab the lime green or aqua blue one, you’re out of luck for now — although you might think about checking back later. Maybe the other two colors will appear at some point later on down the line.

Pottery Barn’s Kai collection is actually quite extensive; I was delighted to find, for example, that it includes a tiny little pool float meant just for your drinks. Called the Kai Drink Caddy, it’s got slots for four cups and a nice big indent in the middle for your ice bucket. (Gotta keep those drinks cold somehow.) It, like its fellows, is not cheap, although it is on sale right now — you can get it for $75, as opposed to its usual $99. Is it worth it? Only you can decide that for yourself. But it is, in any event, A Thing, and honestly, I just enjoy the fact that it exists, even if I never plan on buying it myself.

Check out more of Pottery Barn’s sizeable 2019 summer pool accessory collection here. Now if only it would stop raining so much where I am…