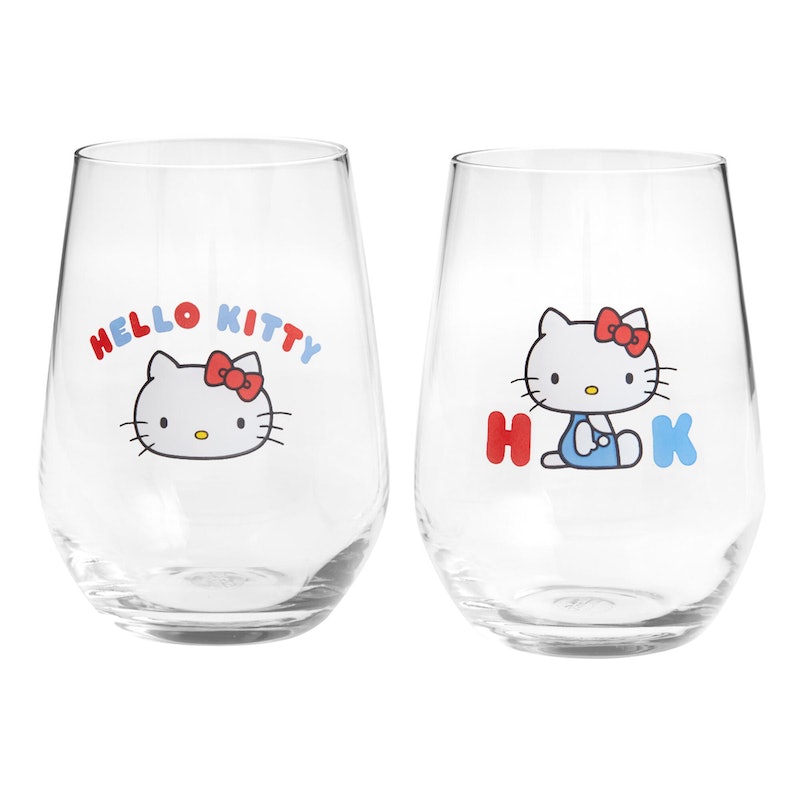 You’re never too old for Hello Kitty — and if you can’t get enough of the Sanrio character’s kawaii little cat face, I have excellent news for you: You can now gaze adoringly upon it as you sip your next glass of wine. Cost Plus World Market currently has Hello Kitty wine glasses available both in-store and online. Are they chic and sophisticated, as one would typically expect a wine glass to be? Not really. But they are lots of fun, and honestly, there’s something to be said for opting for fun over sophistication when the mood strikes (or, heck, opting for fun and sophistication, simultaneously). Even better, the glasses are less than $10 a pair. Happy holidays, indeed!

World Market and Sanrio are in the midst of a huge collaboration right now, all in honor of Hello Kitty’s 45th anniversary. The collab has been going on all year: In February of 2019, the first of several limited-edition Hello Kitty collections launched at World Market, including everything from snacks to home and office supplies, all with a springtime bent; another collection, themed after the fall Omatsuri (festival) season, launched in August; yet another collection is reportedly on the way for the holiday season; and World Market and Sanrio just opened up a Hello Kitty Pop-Up Shop in New York’s Chelsea neighborhood, which will run through Dec. 24, 2019.

Throughout the year, tons of Hello Kitty merch has also been available online at World Market’s website and in stores — a wealth of merch that includes this pair of wine glasses. Stemless and dishwasher safe (in the top rack, at least), the glasses each have a capacity of 12 ounces, making them perfectly capable of holding an average pour of wine. (A pour is typically around five ounces, per Vine Pair, although research has found that we tend to overpour by about 12% when we’re drinking at home.)

And delightfully, they each feature design, making them complimentary, rather than matching: One glass has Hello Kitty’s face front and center, with her name written in her signature shades of red and blue above it, while the other depicts Hello Kitty sitting down, sandwiched between her initials. They’re also actually made of glass — that is, they aren’t acrylic or plastic — so, y’know, try not to drop them. They’re too cute for that. To smash them would be a tragedy.

Hello Kitty, a perpetual third grader who lives outside of London, originally debuted in 1974. The creation of cartoonist Yuko Shimizu, the character was both one of the first Sanrio characters created overall, and the company’s first major character hit. In the years since, she’s spread far and wide — and in 2019, her anniversary celebration has brought us treat after treat, from adorable clothing collabs to delicious cafe eats and sweets.

So, hey, if you’re a die-hard Hello Kitty fan, why not have a celebration of your own at home? Pop the cork on a bottle of Hello Kitty wine (which, by the way, is also available at World Market these days); pour yourself a drink in your Hello Kitty wine glass; and raise a toast to everyone’s favorite cat-girl. Happy birthday, Hello Kitty!