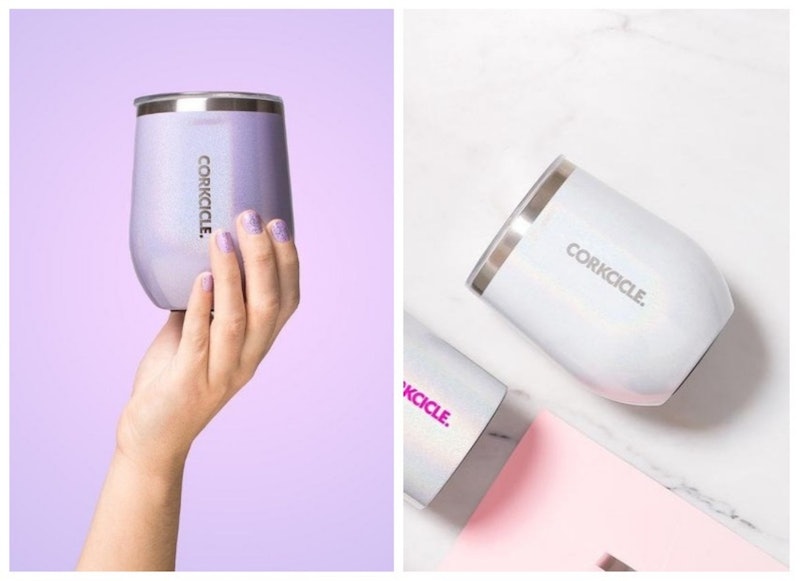 There is… a lot going on there. One, glitter. Two, unicorns. And three, Corkcicle, which apparently got incredibly cool while I wasn’t looking, and I… don’t really know what to do with that. I mean, for me, Corkcicles — the original Corkcicle, which is now called the Corkcicle Air, it seems — have always just been the sort of default “inoffensive” item with which you might end up at the end of a White Elephant gift exchange: Not super exciting; a little bougie; but, y’know, fine. You could do worse. A sparkly, insulated wine glass from Corkcicle that is legit made of unicorn magic, however? Now that’s a White Elephant gift I would do my damnedest to snag.

Anyway, where were we?

The barware and lifestyle brand (lifestyle brand! Corkcicle is a lifestyle brand now!) into which Corkcicle has apparently grown first came to life in 2010, when inventor Ben Hewitt came up with the idea for the original Corkcicle: A fancy ice pack shaped like an icicle that could chill a bottle of wine from the inside, rather than making you wait hours after you stuck your favorite sauvignon blanc in the fridge for it to reach an acceptable temperature. Entrepreneurs Eric Miller and Stephen Bruner came aboard to bring the item to market, and in 2011, the world met the Corkcicle for the very first time.

The Corkcicle itself, now called the Corkcicle Air, has been the brand’s flagship item for nearly a decade now — but, as I have recently learned, they’ve also branched out in the intervening years, producing coolers, tumblers, clothing (for some reason?), canteens capable of holding entire bottles of wine, and, yes, insulated, stemless wine glasses and champagne flutes.

The insulated wine glasses and flutes all share the same general design: Made of stainless steel with “proprietary triple insulation,” they’re vacuum sealed and will keep whatever you put in it either hot for around three hours or cold for about nine. The 12-ounce wine glass also comes with a shatter-proof lid, although the seven-ounce flute does not. Both have a “slip-proof, silicone bottom” and “easy-grip sides,” which, to me, implies that they were designed specifically for poolside drinking. Yes way, rosé. Or perhaps more specifically, yes way, Unicorn Tears rosé.

Not unlike S'well water bottles, Corkcicle’s insulated wine glasses come in a variety of designs and finishes — which brings us to our main point: Several of those designs and finishes are collected under a line called Unicorn Magic, and it is maybe one of the greatest things I have ever seen.

Initially, I didn’t realize the collection was called Unicorn Magic. I first found the glasses themselves at quirky e-retailer Always Fits — the same place at which I originally located those delightful Mr. Rogers Encouragement Lunch Notes — and honestly, I didn’t even need the whole “unicorn” moniker for those things to grab my attention. I was particularly drawn to a sparkly, periwinkle number filed under the name “Corkcicle Sparkle Pixie Dust Stemless Wine Glass,” although I do have to admit that the glittery black “Corkcicle Sparkle Stardust” glass also spoke to my spooky little soul.

It was only when I went to Corkcicle’s official website that I discovered that the whole line of sparkly glasses and other assorted barware is called Unicorn Magic. The other descriptors — “Pixie Dust,” “Stardust,” and the like — are the specific colors available in the overall Unicorn Magic line. Somewhat confusingly, one color in the Unicorn Magic line — a iridescent white — is also called Unicorn Magic, but WHATEVER, I WILL ROLL WITH IT. Also, the Corkcicle website has one more color not available at Always Fits: A shiny, pale gold, champagne-esque color called — wait for it — Glampagne.

Anyhoo, also included in the Unicorn Magic line are tumblers available in 16-ounce and 24-ounce sizes, as well as canteens in 16-ounce, 25-ounce, and 60-ounce sizes. For reference, 25 fluid ounces are equivalent to about 740 milliliters, while 60 fluid ounces are about 1,775 milliliters. A standard bottle of wine is 750 milliliters, which means the 25-ounce canteen can hold a full bottle, while the 60-ounce canteen can hold more than two full bottles.

Just, y’know… think about that for a minute.

I will leave you with one final query: Is it summer yet?