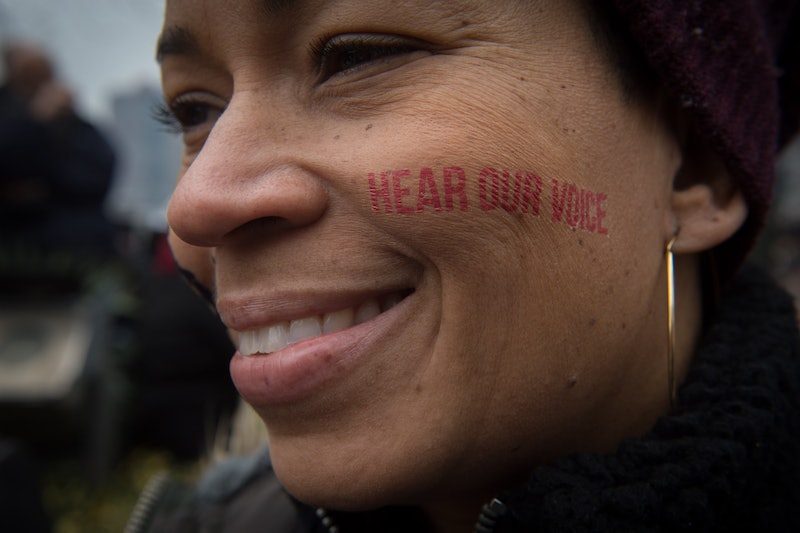 To put it simply, the Women's March on Washington was monumental. Turnout estimates suggest it attracted more participants than Donald Trump's own swearing-in as president, though attendance estimates remain difficult to make. For those who dreaded the inauguration, it's now come and gone. And for those of you who felt compelled to be proactive, there's now one single thing on your mind: the Women's March. It generated serious hype — and for a magnificent reason — but don't let the Women's March's mission come and go like the inauguration did.

Too often are we intensely inspired in the moment, only to return to "normal" life by the time the sun comes up the next day. Finding the thing that makes you inspired certainly takes effort, but keeping that driving force alive is a whole other story. It's even harder when the thing that keeps you going can also bring you down. No, fighting for reproductive rights, equal pay, and inclusivity will never get old. But the legislation being proposed and even passed to directly assault these rights can lend a blow to your sense of hope. It doesn't help that the stripping away of social rights is disguised as politics, which are exhausting in and of themselves.

It's normal to become discouraged or unintentionally complacent at times. When it happens at some point in the future, remember the Women's March's unifying, yet diverse mission that brought hundreds of thousands of individuals together. At least, that's what I plan on doing. As the march came to a close, many feminist marchers have gone back to their daily lives. If you made the trip to D.C., you'll make your way back home to begin work and return to the everyday routine. There's nothing wrong with that. But don't forget what happened in cities across the nation — and across the entire globe — on Saturday, Jan. 21.

Continue to encourage your state legislators to work in the interest of women's reproductive rights. Keep track of feminist demonstrations at your local college. Remain aware of legislative proposals that attack the LGBTQ community.

And perhaps most importantly, don't stop contributing to the discussion and asking questions. If the momentum generated by the Women's March continues, there's no telling what it — and you — can accomplish.

After years pass, America might stop criticizing Trump's past comments about women and minorities and instead focus on the most immediate challenges presented. Inevitably, Trump's presidency will become more normalized than it was on Friday when he took the oath of office.

In the meantime, the refusal to acknowledge the unique struggles Americans face because of their gender or background can never become normal. It's up to us to ensure that.