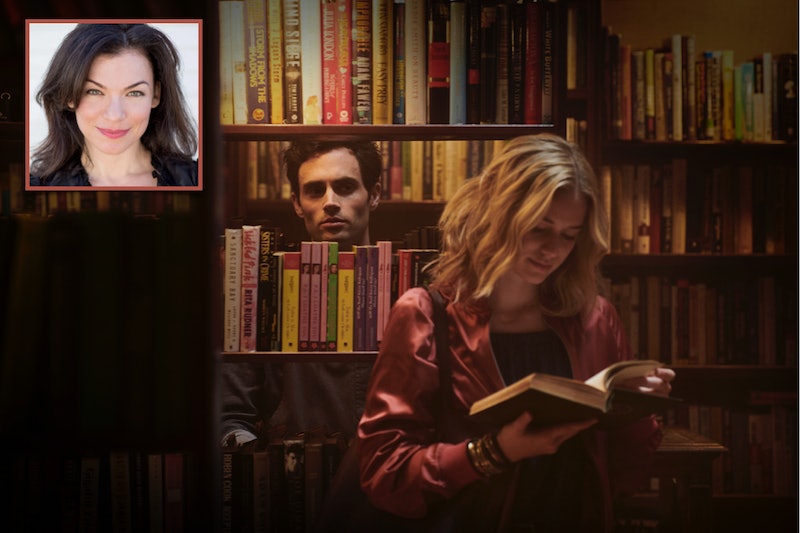 Joe Goldberg is hiding in a shower. Beck, a woman he met mere days before, is gazing into the mirror beside him. He's broken in to ransack her apartment for clues she likes him — except that Beck came home early, so he's now standing motionless in her bathroom. All that separates them is a few inches and a flimsy, egg white curtain. But Joe is unconcerned. "I've seen enough romantic comedies to know guys like me are always getting into jams like this," he muses.

It's a subtle but brilliant scene midway through the pilot of Lifetime-turned-Netflix series YOU, a knowing wink to the audience that lets them in on the charade. Much of Joe's behavior is not that different from the grand gestures we've long romanticized: John Cusack's Lloyd in Say Anything shows up at his ex-girlfriend's, boombox in tow, to blast Peter Gabriel at the crack of dawn; Ted in There's Something About Mary hires a P.I. to track down his high school crush; and Mark in Love Actually arrives unannounced at the doorstep of a distinctly unavailable woman armed with nothing more than cue cards and the impulsive need to vent his feelings. Hell, even Romeo eavesdropped in the shadows before scaling Juliet's now-storied balcony.

In those contexts, it seems charming that a man would cross so many boundaries for love (particularly since, as an audience, we're told to root for him). But what we sometimes forget is that rom-coms, like all fiction, are a form of escapism — a world where things like personal space and social etiquette matter less than a climactic narrative. As Mindy Kaling put it in her 2011 memoir, "I simply regard romantic comedies as a subgenre of sci-fi." Set within a thriller series like YOU, that fairytale begins to crumble.

"We're not eviscerating the genre like we don't enjoy it," YOU co-creator Sera Gamble tells Bustle. "I love romantic comedies, I've always loved them, but this show was an opportunity to really take apart what that means. I think one of the juiciest things about being a human being is diving into your own problematic desires and the contradictions within ourselves, seeing what's fun in a fantasy and what's scary in real life."

Much of this is baked into Caroline Kepnes' YOU book series, on which the show is based, but there's a certain poetic irony to seeing it committed to screen. It's like an anti rom-com in the worst of ways, turning everything we love and hate about these stories into a slow, revealing nightmare. Here, Joe isn't just a heart-eyed underdog chasing after his dream girl — he is a stone-cold predator, and Beck is his unwitting prey.

Of course, Gamble and Kepnes aren't the first to scrutinize romantic comedies, but when we talk about such films, it's largely in relation to women — the way these kinds of fantasies inflate our expectations or minimize our agency. What we don't discuss as often is what these movies say to men. Case in point: since YOU's premiere in September (and subsequent rebirth on Netflix), it's frequently been hailed as a cautionary tale, an admonition for what happens when you don't password-protect your phone or privatize your Instagram. And while certainly, that's part of it, it's not the point of the show.

"It's a cautionary tale for men. 'Hey men, don't stalk women.' That's the caution," Gamble explains. "I think we're very clear in the storytelling that there actually is no way to perfectly protect yourself in modern society. This is not a gendered statement. Technology has outpaced our ability to fully protect ourselves."

Even more telling is the response to YOU. Not only has Twitter upheld Joe as a heartthrob, but many viewers have berated Beck for not taking the "right" precautions. One of the biggest gripes against her is that, despite living in a ground-level apartment with floor-to-ceiling windows, she's yet to put up curtains. It's this that allows Joe to freely spy on her — and, let's not forget (spoilers!), kill her once she discovers he's been murdering all of her friends. The glass box he keeps her in just before her death is a twisted parallel for the way he sees her: he's still watching from afar, only now, Beck is locked in.

"[Joe] has her used tampon in a box, he has a jar of human teeth, yet we're going to focus on the fact that oops, she f*cked up, she didn't buy curtains for her apartment, and now she's dead," Gamble laughs. "I'm generalizing slightly, but there's a set of facts that we can agree on about the gender politics of our society. We are quicker to judge women, and we are eager to dissect the behavior of the victim ... [but] I just go back to my own experience being in my early 20s. I didn't have any money, and I was sloppy about a number of things like my personal security that I didn't really have time to think about. Every one of us, male or female, is just lucky when something bad doesn't happen to us, because it's a dangerous world out there."

Part of this is intentional: just like in the rom-coms he uses to justify his violence, we're meant to root for Joe, to downplay his behavior, and to blame Beck. But we're also meant to feel totally f*cked up for thinking it.

"Something would happen [in the book] and I would think, 'this guy is a f*cking stalker and a menace and a terrible, terrible, terrible guy,' and then something else would happen and I would think, 'Well gosh, I really hope these two crazy kids can make it work.' And I would hear in the back of my head like, 'What is wrong with me?'' Gamble says. "The show is funny and entertaining and we're sort of highlighting the insane ridiculousness of Joe's train of thought, like the fact that he considers himself to be a feminist. But we are not trying to minimize the heaviness of the violence and how destructive his way of thinking is to himself and to everyone around him."

YOU isn't as explicit in its feminism as say, The Handmaid's Tale, a show squarely directed at skewering the patriarchy. But that's what makes it so ingenious — it invades your core, implicit thinking. It asks you not only to question how you engage with the world, but how it engages with you. And unfortunately for many of us, we may not like the answers that we find there.