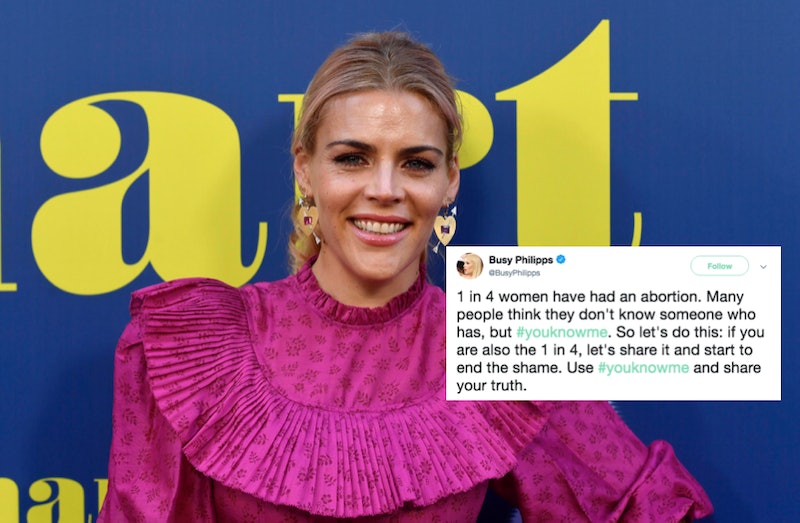 In response to the flurry of anti-abortion laws that Republicans passed in recent months, actress Busy Philipps launched a social media campaign to remove the stigma around abortion and shed light on how common the procedure is. Since Philipps promoted the hashtag on Tuesday, "You Know Me" tweets about people's abortion stories have been filling up Twitter, and thousands have used the hashtag to share their personal experiences.

“The statistic is one in four women will have an abortion before age 45,” Philipps said on her talk show while discussing the recently-signed anti-abortion law in Georgia. “That statistic sometimes surprises people, and maybe you’re sitting there thinking, ‘I don’t know a woman who would have an abortion.’ Well, you know me.”

Philipps echoed her remarks on Twitter, and encouraged women who've had abortions to use #YouKnowMe to "start to end the shame" surrounding the procedure. The campaign took off like wildfire, with thousands of people, including a handful of celebrities and other public figures, using the hashtag to share their experiences with abortion.

"I was 27," filmmaker and author Miranda July wrote. "My then-boyfriend, who was big on 'pulling out in time', thought we should consider having it and I said something like DO YOU HAVE ANY IDEA HOW MUCH I AM ON THE VERGE OF DOING?? 2 years later I started shooting my first feature. #youknowme"

"I am here and able to mother my incredible daughter because of the health- and life-saving abortion I had when she was three years old. #YouKnowMe," writer Jessica Valenti tweeted.

In an interview with the New York Times, Philipps discussed the thinking that led her to create the hashtag.

"Abortion has been, historically speaking, a very taboo subject that women have a hard time talking about publicly, because it’s such a personal decision," Philipps told the Times. "The anti-abortion people in this country are so vocal, and for all of those reasons I think women have remained silent. And I felt like, well, maybe there’s actually value in sharing."

Several women expressed a combination of respect for the campaign and frustration with the factors that led to it.

"all the respect for folks using #youknowme to share their abortion stories," writer Maya Kasoff tweeted. "i just wish it didn’t feel necessary for people (largely women) to tear themselves open & broadcast and confessionalize their trauma at times like this in order to make a point or be viewed as people."

"For me, sharing my story has been powerful," former Planned Parenthood President Cecile Richards tweeted after talking about her own abortion. "I meet people all the time who tell me it inspired them to talk about their abortions. But the fact is, we shouldn't have to share our most personal experiences simply to try to generate a measure of empathy from politicians. #YouKnowMe"

In the time since Philipps launched her campaign, Alabama's governor signed the most restrictive anti-abortion law in the country into law. In total, eight states have passed anti-abortion legislation in 2019, according to the Times.

"Read these stories in the hashtag," actress Amanda Abbington tweeted. "And know we are not alone and sometimes something happens and we have to make a difficult and horrendous decision. And now that right is being taken away. I had one. Long time ago. And it was the hardest thing I’ve ever had to do. #youknowme"