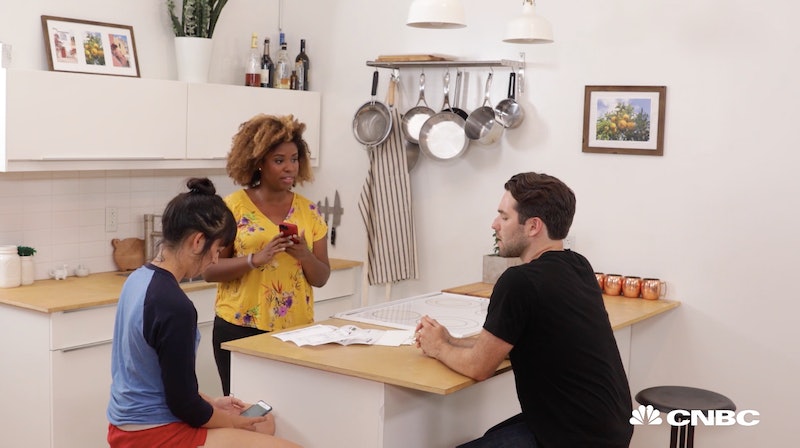 Millennials are no strangers to cash flow issues. Since many are living paycheck-to-paycheck, can’t afford to rent alone, and have a tight monthly budget (if they keep a budget at all), they find themselves in stressful financial situations all too often. That’s why CNBC Make It and Bustle collaborated to launch Young Money, a digital video series that features awkward but common scenarios many find themselves in. With episodes like “How to Split the Check with Friends” and “DIY or DI-Why Bother?”, the series offers tidbits of advice and insight to viewers who may need help handling both their bank accounts and relationships. But it’s the Young Money episode “Cheap Roommates and How to Deal” that might just resonate hardest.

In this two-minute episode, viewers watch as the series' star Akilah Hughes and her two roommates awkwardly deal with splitting rent, utilities, and essentials (i.e., toilet paper, cleaning supplies, and more). The video begins with Hughes breaking down individual costs for her two roommates, and plainly suggesting the three of them should split the bill evenly. While Hughes’ one roommate sends money to her Venmo account almost instantly, her other roommate, John, seems hesitant. John goes on to explain he was on vacation for seven days at the beginning of the month, and therefore feels it’s only fair that he pays less for some utilities. In response to Hughes’ and their other roommates’ clear looks of annoyance, John says “I’m not trying to be weird about it, I’m just really broke.” They both point out that John could afford to go on vacation to Switzerland, to which he exclaims “I know, I spent so much money there! It’s really amazing though.”

After John redoes Hughes’ calculation, his suggested total cost is more than $300 less than the original agreement. Hughes and her roommate scoff, but before the conversation turns ugly, the real estate agent who rented them the apartment magically appears out of thin air. When Hughes’ asks who the woman is, she responds, “I’m the conversation you should’ve had before you first moved in together.”

The video then flashes back to Hughes and her two roommates touring the apartment with the real estate agent. Upon deciding they want to rent the place, the conversation about splitting the costs arises — the same exact conversation that the roommates have in the beginning of the video. When John asks if they have to pay their full share even if they go out of town, Hughes says “John, yes. I think we just put that in writing, and that way, it’s like a contract between us.” The episode ends with John posing more “what if” scenarios, and his roommates interrupting him by asking him to “just sign the paper.”

The new Young Money digital episodes are short, but so important, because they openly (and hilariously) discuss the tension-filled financial situations nobody ever really wants to handle. Millennials’ financial issues have been blamed on everything from avocado toast to coffee, but the reality is that much of the cash flow problems are out of their immediate control. Studies have found young people face a large pay gap when compared to incomes of older generations; Teen Vogue reports that “the average 30-year-old earns roughly the same amount as a 30-year-old living in 1984 — even though our economy is now 70 percent more productive, and millennials are more educated than any generation that’s come before them.” This means that many of the situations Young Money depicts are sadly unavoidable for many millennials. Hopefully, the digital video series will help young people better prepare for and handle awkward roommate situations, without jeopardizing their finances or friendships.

You can watch the rest of Young Money at CNBC Make It.