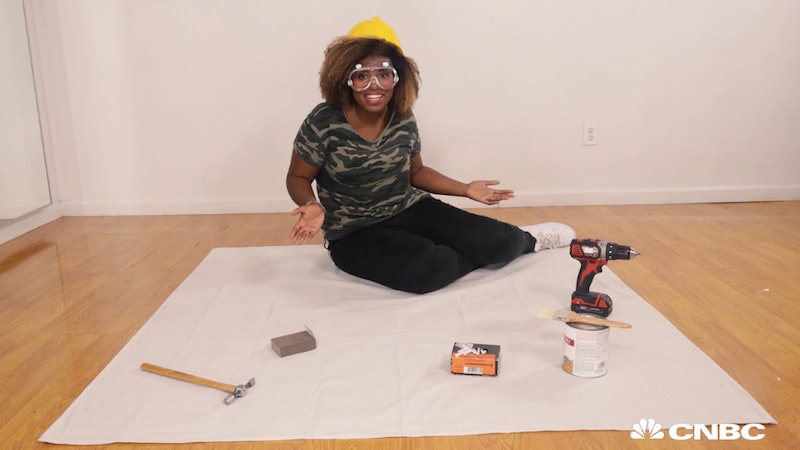 We all love a good DIY project. At least, in theory we do. We love finding an idea on Pinterest, pinning it, and thinking about actually doing it one day. But, when it comes down to it, most of the time DIYs end up taking way more time and money than anticipated. Young Money, a new digital series by CNBC Make It and Bustle, spotlights this very problem in its episode, “DIY Or DI-Why Bother?” The series itself navigates through money matters and offers tips and tricks for how to adult, with the help of comedian Akilah Hughes — who is #relatable and totally gets everyone's struggles to save money and function all at the same time. And, this episode in particular will likely hit a chord with anyone who’s ever thought to themselves, “I can just make this at home!” — only to regret it later.

Because like, sure, if you live in a craft warehouse and have every tool and ingredient under the sun, you're in a good place to DIY. But if your little at-home project takes multiple trips to the store, you're probably just better off buying whatever it is you want to make — unless you're really up for a challenge.

In this episode, Hughes breaks down the DIY spectrum into things that are worth doing at home — like painting your nails — and things that you're better off buying, like a bookshelf. Hughes reminds us how important it is to have a budget in mind before embarking on any Pinterest ventures. Because, if you haven't learned the hard way by now, often times these little projects become big, expensive disasters if we don't assess them properly.

And to save you time, here are a few other DI-Whys to avoid when you're surfing Pinterest later:

I know, making your own paper sounds cool. And recycled paper is not only good for the planet, but it looks pretty artsy if done properly. But the amount of time it takes to make a single piece of paper is not worth the mess. Instead, head to the craft store and get yourself some pre-made recycled paper. It will be equally as good for the environment, and you won't spend all day getting paper pulp all over your kitchen table just to make one piece.

No matter how handy you are, don't attempt anything electrical — especially if you live in a rented space. If you're having an issue with a light, a socket, or an appliance, call a professional. If you try to fix it by yourself, you risk not only breaking it further, but creating other issues as well.

Making Your Own Sprinkles

Making at-home artisanal sprinkles certainly sounds good, but let me tell you: it's probably not worth it. Unless your pantry is fully stocked with all of the many necessary ingredients, you're going to make a mess and waste a lot of money. Sprinkles are cheap; buy them in bulk to save money.

There are so many DIY tutorials that make mod, brass, artsy chandeliers look incredibly easy to put together. That is, until you look at all the supplies you need and realize you of course have none of them. And even if you decide it's worth it to spend the money on all the piping and hardware, you have to consider the fact that your handy work might break and create even bigger issues for you and your home. If you're looking for a cheap chandelier, check out a Goodwill or the thrift store.

Macarons are expensive, and I totally get why people want to make them at home. But they're also really hard to make, require a lot of special ingredients that you probably don't have lying around in your pantry, and they never come out as pretty as they do in stores. Instead, find a bakeshop, and if you really want macarons, look at them as a splurge purchase.

Don't get me wrong — setting aside a Saturday to spend time on a DIY project you found on Pinterest can be incredibly relaxing, and rewarding. But first, make sure you do some research. Some things are just better when they're store-bought — and there's no shame in that, either.