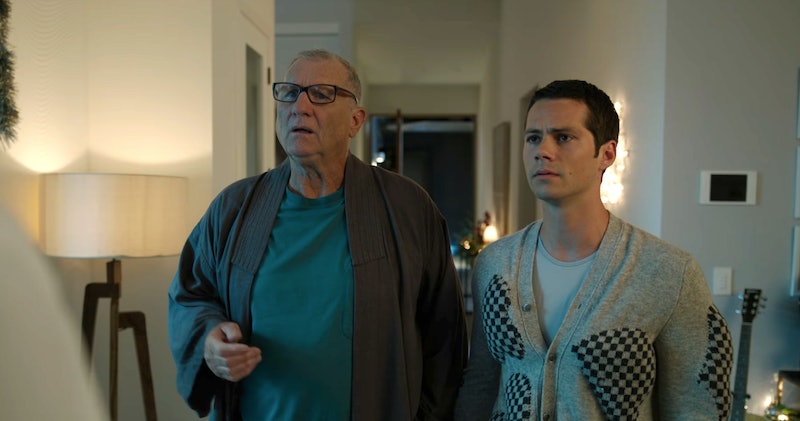 Spoilers for Weird City Season 1, Episode 1 ahead. What if an algorithm could find your perfect match? Sure, online dating services have promised that for years, but the online dating site in Weird City uses DNA to find you "the one." Turns out, people don't have dating all figured out in the not so distant future, either, but The One That's The One comes with a 100 percent guarantee to send you "the perfect person for you." Through a series of questions, DNA testing, and Dr. Negari's algorithm, the company promises to find the person for you. However, as Dylan O'Brien and Ed O'Neill's characters discover, true love isn't about science after all.

As a person who was raised Below the Line, O'Brien's Stu doesn't have an assigned mate like the affluent Above the Line-ers. While there are plenty of insinuated pitfalls to the arranged marriages of the "Haves," Stu is disillusioned with dating, so he decides to give The One That's The One a shot. Even though he has always identified as straight, Stu ends up with O'Neill's Bert. The men have many similarities — they're both from Below the Line, like their egg yolks on the side, and are perpetually late — but they assume there's been some mistake. Until, after their second interaction, they end up in bed together and decide that the algorithm by LeVar Burton's Dr. Negari must have been right all along.

Yet, after they have been happily committed to each other for a year, won over each other's families, and are married, they find out the results were a fluke. Stu is supposed to be with the bartender who he met in the beginning of the episode and Bert with Al from Al's Diner. Their romance was unconventional, but Stu and Bert believed in it because of the supposed science that confirmed it. Learning it was all a big mistake throws their entire relationship into question — not that their feelings about it matter. Dr. Negari tells them they're legally required to separate, as their relationship goes against his data. Life Above the Line is all about order, Dr. Negari says, so any pairing that doesn't fit this order isn't allowed in society.

Online dating sites in the real world and outside of the city of Weird may not use DNA, but they still largely depend on algorithms, self-assessments, and selecting the characteristics you think you're attracted to. Because of these parameters, online dating doesn't often allow for the unanticipated spark that can connect two people who seemingly shouldn't work, but do. First impressions occur on a screen and due to your own biases and established calculations, you might not have as much agency in your choice of a potential partner as you think.

Of course, that's not to say that Stu would have ever chosen to be with Bert if they had randomly encountered each other. And in fact, it's the confidence in The One That's The One that allows them to pursue a relationship that they wouldn't have otherwise considered. But when it all turns out to be a mixup, Weird City shows just how absurd it was to have believed a laboratory could find their soulmate in the first place. Sure, maybe Stu and Bert would have been satisfied with their The One That's The One assignments, but now that they've experienced true, organic love with one another, they don't care who's "the one" for them. So they abandon their lavish life Above the Line and move to Below the Line where people may not have as much money, but at least (for now) it seems as if they have more free will — and thus, happiness.

Stu and Bert owe their love story to online dating, but unlike Black Mirror's surprisingly upbeat "Hang the DJ," Weird City isn't a ringing endorsement for technology. The human emotion of love is pretty unexplainable, so besides there being more than just one person out there that you can connect and fall in love with, data and science may never crack the mystery of what draws people together — in the present or the future. (Plus, you probably shouldn't trust a scientist who's as clumsy with his sandwiches as Dr. Negari.) With that in mind, Weird City seems to send the message that love is all about embracing the illogical and unexpected. And when you do find that special someone, don't ever let society or science tell you it's not meant to be.