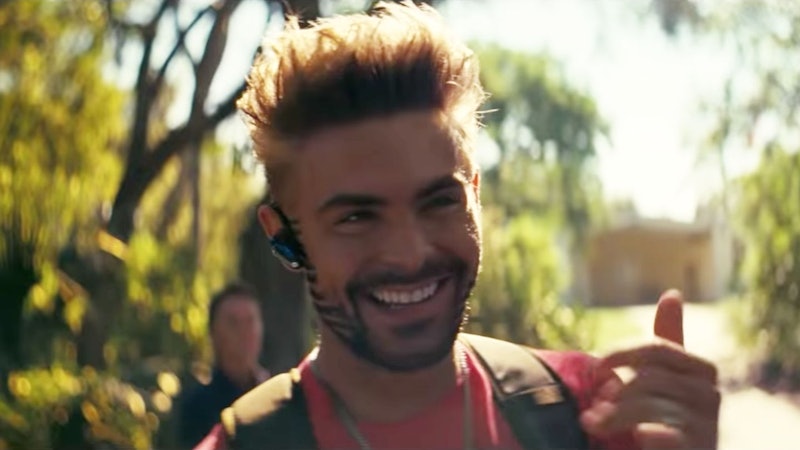 The Beach Bum, out March 29, follows Matthew McConaughey's Moondog, a hard-partying Floridian poet forced to put down the bong and finish his book after finding out his inheritance hinges on it. En route to deadline he meets fellow travelers in revelry, including upbeat pyromaniac Flicker, played by Zac Efron. Interestingly, Zac Efron's Beach Bum role isn't the first time he and McConaughey have palled around in a film, but this time, their onscreen counterparts are having a much better time.

Efron and McConaughey first appeared on screen together 2012's The Paperboy, as brothers no less — Jack and Ward Jansen respectively. Wondering why you haven't heard of it, or why it's not getting mentioned much in the Beach Bum interviews? Despite a star-powered cast, including Nicole Kidman, John Cusack, and Macy Gray, the film was a flop, making less than $4 million at the box office in the U.S.

Efron is the paperboy of the film's title, forced to return to his hometown and take the job after he loses his swimming scholarship in a college scandal. McConaughey is his brother, a reporter returning to try and exonerate a man on death row, and Kidman plays Charlotte, the woman Jack's obsessed with, who loves the death row inmate, not him. Spoilers ahead.

The movie (which is streaming on Tubi) is high Southern Gothic camp, or as Roger Ebert put it, "a humid, deep South wallow in raunch." Halfway through the film Jack discovers Ward's been hiding he's gay, and specifically attracted to black men, which isn't even the film's most ridiculous and insulting plot point. No, that would be when Jack gets stung by a jellyfish while swimming in a lake and has a terrible reaction, and Charlotte has to pee on him — to save him, of course.

Compare that to The Beach Bum's sunnier, brighter take on the South, with McConaughey toking in a thong and captain's hat instead of gloomily researching, and Efron giddily exclaiming, according to a Post review of the film, that he loves “lighting sh*t on fire.” Efron seemed to have a much better time offscreen as well as on. Talking to Entertainment Tonight, he said of reuniting with his co-star, "I got to meet up with Matthew McConaughey; it was one of the most fun sets I've ever been on."

Efron's Flicker sports a wild 'do and bouncy attitude, grinding on a drag queen in the film's trailer and gleefully cursing up a storm as he and Moondog make their way through the Sunshine state, meeting Snoop Dogg as Lingerie, Martin Lawrence as a dolphin tour guide with a coke-addicted parrot, and Jonah Hill as Moondog's agent, sporting a Southern-fried accent that would fit right in with The Paperboy.

Efron at least acknowledges that even if he and McConaughey's first film together wasn't enjoyed by the wider world, he had a good time getting to know the future Moondog. In the same ET interview he said, "We go way back, to The Paperboy. I've looked up to that guy, my entire life basically."