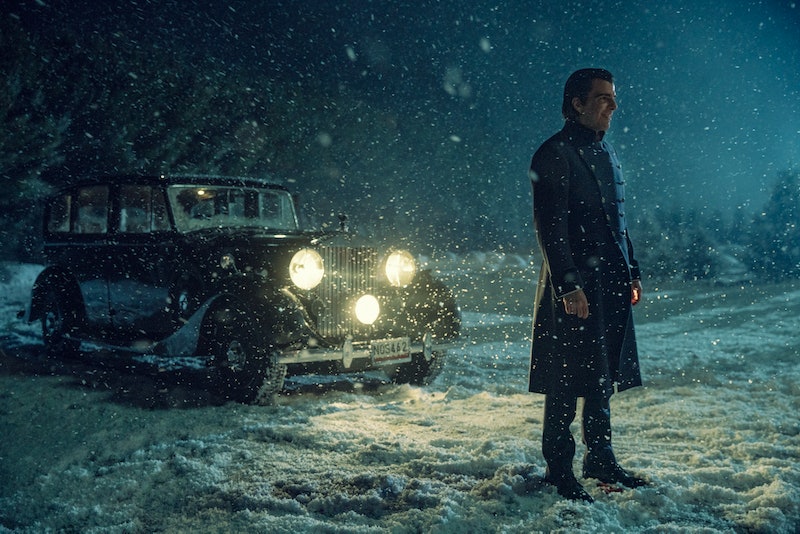 If you feel like vampires are as played out in today's pop culture as zombies, then you may be approaching AMC's newest series with a healthy sense of trepidation. Yes, technically Zachary Quinto's NOS4A2 character is a vampire — but this is a depiction of vampires like you've never seen them before. The villainous Charlie Manx is a far cry from True Blood's sexy vamps Twilight's glitter-skinned beings, The Strain's gruesome creatures, or even the gothic Count Orlok from the iconic 1922 silent film Nosferatu, from which NOS4A2 book author Joe Hill cribbed the title of his horror story.

Although that clever title does imply a connection between Manx and the blood-sucking monsters popularized by Bram Stoker's Dracula, he's less a reiteration of that myth and more a reimagining of it. NOS4A2 was the third novel by Hill, the son of legendary horror author Stephen King, following his 2007 debut Heart-Shaped Box and 2010's Horns (which was adapted into a 2013 film starring Daniel Radcliffe). In his third novel, Hill unleashed his most terrifying creation yet: Charlie Manx, who drives around in a Rolls-Royce bearing the titular license plate, kidnapping children. But he doesn't suck their blood by biting their necks with two sharp fangs, as you might expect from a typical vampire story.

The truth of Charlie Manx is much more horrifying. Rather than sucking their blood, he sucks the life force out of his young victims, growing younger and more healthy while they grow more decrepit and monstrous. He deposits his victims in a fantastical realm called Christmasland, where it's the happiest day of the year all year 'round. There, he feeds on their unhappiness… until they become gleeful, soulless, toothy little monsters.

"NOS4A2 is not really a vampire story, anyway," New York Times critic Janet Maslin wrote in her glowing review of the book. "Mr. Hill's imagination is much more far-ranging than that. Which is scarier: bloodsucking vampires or the unexpected sound of treacly Christmas music suddenly playing in the summer? USA Today's Carol Memmott praised the genre-bending nature of Hill's novel in her own four-star review, speaking to how the author takes inspiration from the classic Nosferatu and then "molds the vampire epic into a grizzly modern tale of vengeance and retribution."

In the book, Manx is described as "an apparition from the circus: the human skeleton crossed with a stilt walker, an impossibly tall and gaunt and ravaged figure in an archaic tailcoat. His misshapen bald head and beaky nose brought to mind vultures." Transforming the handsome Quinto into this nightmarish creature was no small task. While vampires in most stories remain immortalized at the age at which they were turned, Manx operates a bit differently. Makeup designer Joel Harlow (who also helped transform Quinto into Spock for the Star Trek movies) revealed to Variety that Manx will be seen at five different ages throughout the season: close to Quinto's own age (41), as well as 65, 80, 100, and 135.

Even when crafting the villain's prosthetics, Harlow strove for a sense of realism. "If he looks like a monster from the beginning, that doesn’t really work," the artist said. That being said, he did remain faithful to Hill's descriptions of Manx: "His teeth are deteriorated, yellowed and broken, as are his fingernails, and they get progressively more so over time." Keeping the design grounded in realism even as Manx reached his oldest age proved a challenge for Harlow, simply because there are "no references to real-life people that old."

Charlie Manx is a monster who feeds on a vital force from his victims in order to sustain himself, a process which turns them into monsters as well — but that's really where the comparisons to traditional vampires ends. Quinto's character in NOS4A2 is really more vampiric than a straight-up vampire, which should leave plenty of room for nasty surprises as viewers learn more about Manx and how he operates. At this point, pretty much everyone knows how vampires work; it's the ways in which Manx subverts those expectations that will likely prove the most terrifying.

You can hop in Manx's Rolls-Royce and take that trip to Christmasland when NOS4A2 premieres on AMC on Sunday, June 1… if you dare.