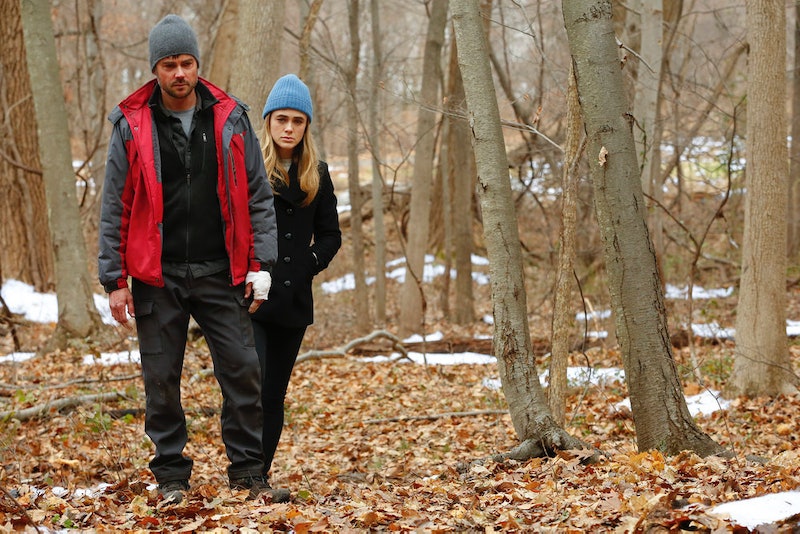 All of the Manifest passengers from Flight 828 are connected, but Michaela Stone shares an intense connection with someone who wasn't on the plane at all. Zeke time traveled just like the plane passengers, except he was on the ground in a cave during a storm and he did so about four years after the plane initially disappeared. Even though they have different backstories, on Manifest, Michaela and Zeke are connected by their visions (aka "callings") that always seem to link up with one another. And there may be a big reason for that.

Michaela's nephew Cal said in the first episode of Manifest Season 2 that Michaela and Zeke were meant to answer the callings together. He couldn't explain why, just that it was important that it be both of them together. If that's true, they're running short on time. Zeke only time-traveled for a year, versus Michaela's five and a half years. That means if the death date theory is true — that you can only live for the exact amount of time you were gone — Zeke has under a year left. Indeed, one of the previews for Season 2 hints at Zeke's death as he gets sucked out of an airplane during a joint calling that he, Michaela, and Cal are having.

Before his death, though, the season trailer shows that he and Michaela get really close. They're even kissing in a scene — so apparently the whole Zeke going to jail thing doesn't last long. But the closer they get, the more complicated things will be — especially as we learn more about Zeke's past. Melissa Roxburgh, who plays Michaela, told Entertainment Weekly that "Zeke went through a dark time in his life and Michaela is introduced to some of those people from that period and is put in the middle of a situation where she's forced to confront a huge part of his past. She ends up having to put out a pretty big fire."

But even with that obstacle, Zeke and Michaela's budding relationship doesn't waver in Season 2. "There's a lot of really disturbing and dark things that happen, but their relationship is this ray of light," Zeke actor Matthew Long told EW. "Think about how perfect it is to have found the person you have that supernatural connection with. It seems so natural for it to progress to a romantic level."

Zeke can certainly understand Michaela and the callings on a level that Jared never could, but their connection goes deeper than that. Michaela and her brother and the other passengers all share the callings. But for Michaela and Zeke, it's like they fill in the missing pieces for each other. When Zeke first escaped the cave, he had a calling to find Michaela, and she had one about him as well. And in the Season 2 premiere, fans saw that when Michaela touched Zeke's arm, she got more information about a calling that she hadn't previously known. They're informing each other in ways most of the other passengers aren't — and a clue about that lies in their names, according to a Reddit theory from HomerJBouvier.

The meaning of the name Michaela is "Who is like God" and Zeke means "God strengthens." This series has several religious undertones, so those names are not likely a coincidence. While Michaela's brother Ben often tries to understand the science of their situation, Michaela has entrusted her faith to the callings. She does what they tell her every time and doesn't question why or when they're occurring.

In the Season 2 premiere, she also said she thinks the "save the passengers" calling is about helping them now just to survive and live their lives in the best possible way before they all hit their death date. She's doing God's work, no questions asked. She is the one "who is like God." And Zeke has perhaps been sent to help strengthen Michaela — to help guide her through the callings by sharing them with her and helping the best he can.

Things will not be smooth sailing for either Michaela or Zeke according to the Season 2 trailers. But as long as they have each other, they're better off than being alone. They're meant to get through this whole thing with the time travel and the callings together, as Cal said. We may learn more about why in the coming episodes. But, for now, all that matters is that they stick around to strengthen each other and follow the missions of the callings as a duo — you know, once Zeke somehow gets out of jail.

More like this
'Abbott Elementary' Fans Probably Missed This 'Parent Trap' Easter Egg
By Sam Ramsden
'The Last Of Us' Episode Schedule Competes With The Super Bowl & Oscars
By Brad Witter
Grammys Host Trevor Noah Made Adele's Dream Of Meeting The Rock Come True
By Brad Witter
Pedro Pascal Barely Got Through The "Lisa From Temecula" 'SNL' Sketch
By Stephanie Topacio Long
Get Even More From Bustle — Sign Up For The Newsletter
From hair trends to relationship advice, our daily newsletter has everything you need to sound like a person who’s on TikTok, even if you aren’t.