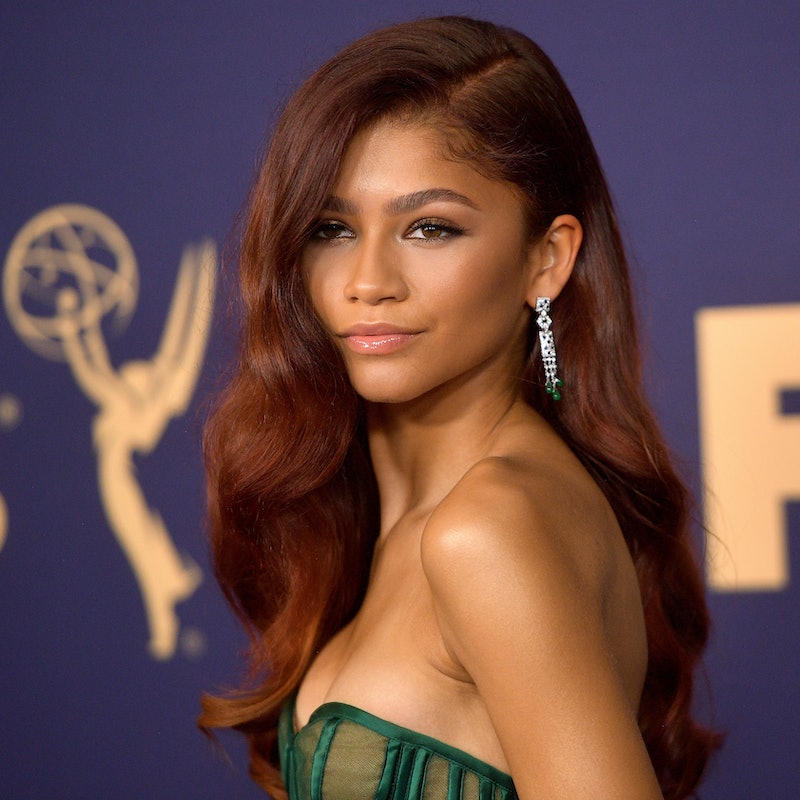 Near the end of the summer, Euphoria co-stars Zendaya and Jacob Elordi first sparked dating rumors after a birthday trip in Greece. Now, Zendaya and Elordi's recent trip to the movies is starting up that speculation all over again. While it's unclear what film they saw, does it really matter? These two beautiful humans could be in a beautiful relationship. Beautiful.

An onlooker told Us Weekly that Zendaya and Elordi were at the movies in Sherman Oaks, California this past Saturday. "It was just the two of them out together," the source revealed. "Jacob looked like he was trying to be incognito, wearing a hat that covered his face." (Bustle reached out to Zendaya and Elordi's reps for comment on the dating rumors, but did not receive an immediate response.)

The stars first had fans guessing about a possible romance at the end of August when they were spotted on vacation by a fan in Greece, and an Us Weekly insider claimed they were "getting a little cozy" and "being a little flirty." When asked by E! News about the trip a few days later, Zendaya clarified she was on vacation with her family (plus Elordi) in celebration of her 23rd birthday. Even if they're truly just friends off-screen, it's certainly a stark contrast to their characters' relationship on Euphoria.

Prior to being linked to Elordi, Zendaya was long-rumored to be dating Spider-Man co-star Tom Holland. "They started seeing each other while they were filming," a source told People in July 2017, who also claimed the pair had "gone on vacations with each other." However, Zendaya quickly put that idea to rest on Twitter, writing in part, "I haven't been on a vacation in years! hbu @TomHolland1996 ???" She further clarified her and Holland's status by telling Variety, "He’s literally one of my best friends."

As for Elordi, he very publicly dated his The Kissing Booth co-star, Joey King, for about two years. The pair met in 2017 while filming their hit Netflix movie, but reportedly split sometime around April 2019. As King and Elordi proved, it's pretty common for celebrities to date their co-stars, but what's going on between Zendaya and Elordi remains a little unclear.

More like this
Selena Gomez Is Fine Being Single, But She Still Manifested Romance On 'SNL'
By Martha Sorren, Jake Viswanath and Jack Irvin
Who Is 'Umbrella Academy' Star Elliot Page Dating After His Divorce?
By Jake Viswanath
Freddie Flintoff’s Wife Has The Cutest Nickname For The Famous Cricketer
By Frances Stewart
Alexandra Burke Just Welcomed Her First Child
By Eleanor Noyce
Get Even More From Bustle — Sign Up For The Newsletter